Users took to the social media platforms to share their conspiracy theories regarding the attacks that left 34 people dead with multiple Twitter users placing the blame squarely on Israel. 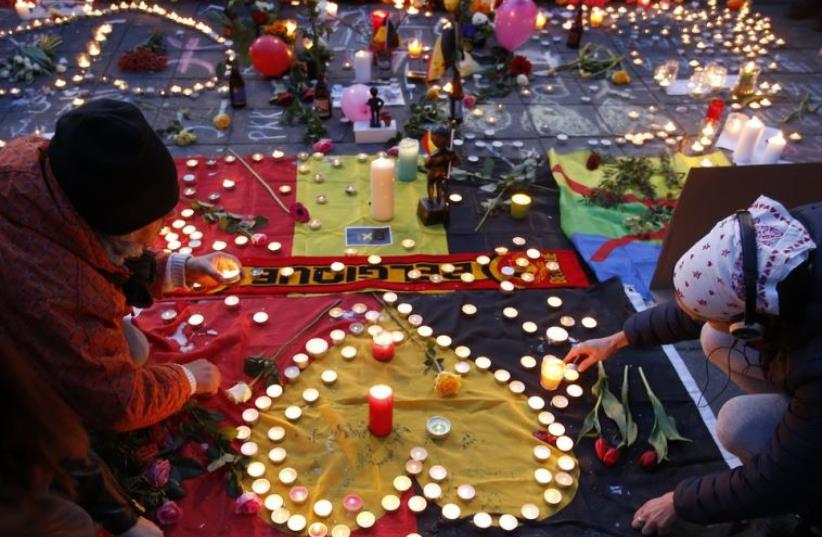 People gather around a memorial in Brussels following bomb attacks in Brussels
(photo credit: REUTERS)
Advertisement
Twitter users blamed Israel and the Mossad for the twin terrorist attacks that took place in the Belgian capital city of Brussels on Tuesday. Users took to the social media platforms to share their conspiracy theories regarding the attacks that left 34 people dead with multiple Twitter users placing the blame squarely on Israel's clandestine intelligence agency."Wouldn't be surprised is Brussels attacks were #Mossad," tweeted on user. "Bombs have always been their weapon of choice."

Wouldn't be surprised if Brussels attacks were #Mossad #FalseFlag.#Israel i leadership R nuts.Bombs have always been their weapon of choice
— Darkhorse (@AnnieDarkhorse) March 23, 2016


Another user claimed the attacks were a joint effort between the CIA and the Mossad while another claimed it was the Mossad falsely taking claim for the attack in the name of ISIS as a way to slander the entire religion of Islam and generate fear towards the Muslim community.


"Brussels is the target of Mossad working with some drug addict gangs to stamp the fading authority once Israel had and to disturb Europe," wrote another Twitter user.

#Brussels is the target of Mossad working with some drug addict gangs to stamp the fading authority once Israel had and to disturb Europe ..
— B1DON (@B1DON) March 22, 2016

A suicide bomber blew himself up at Brussels airport on Tuesday killing at least 14 people and a further blast tore through a rush-hour metro train in the capital shortly afterwards, claiming 20 lives, according to public broadcaster VRT.CNN reported that more than 130 people were also injured in the attacks. A witness said he heard shouts in Arabic shortly before two blasts struck the packed airport departure lounge. Pictures on social media showed smoke rising from the terminal building through shattered windows and passengers fleeing down a slipway, some still hauling their bags. All public transportation in Brussels was shut down, as it was in London during 2005 militant attacks on the underground that killed 52. A further 225 soldiers were sent into the city and the Belgian Crisis Center, clearly wary of a further incident, appealed to the population: "Stay where you are". The blasts at the airport and metro station occurred four days after the arrest in Brussels of a suspected participant in November militant attacks in Paris that killed 130 people. Belgian police had been on alert for any reprisal action.
Advertisement
Subscribe for our daily newsletter