Do the executions reflect frustration and insecurity, or determination? 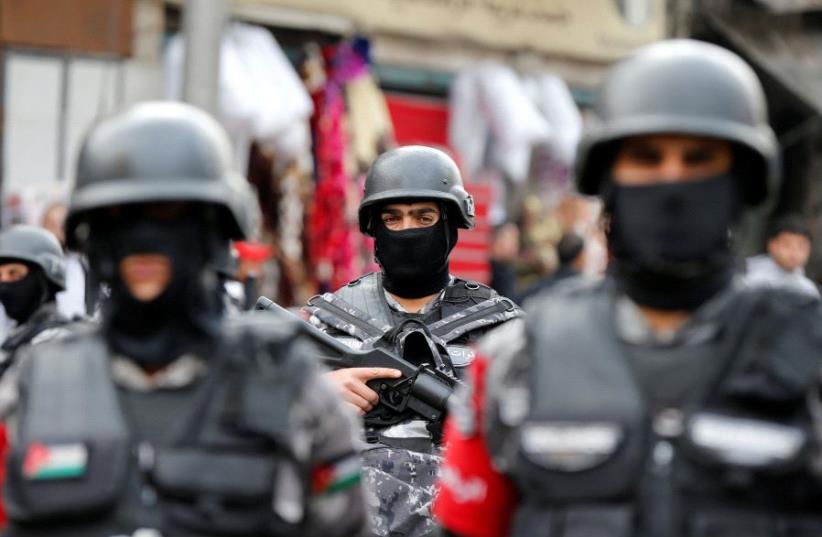 Jordanian policemen stand guard during a rally to support security services after shooting at Karak castle, in Amman, Jordan, December 23, 2016.
(photo credit: REUTERS)
Advertisement
In a bid to project strength in its fight against ISIS, Jordan last week executed 15 people by hanging, its largest-scale implementation of capital punishment within memory.Israeli analysts differ, however, on whether the action reflects frustration and insecurity or determination and a sense of having things under control.Ten of the executed had been convicted of terrorism charges, including one that went as far back as a 2003 attack on Jordan’s embassy in Baghdad that killed 18 people and one as recent as September, when writer Nahed Hattar was assassinated in Amman. Five of those who were hanged were convicted of involvement in what is known as the “Irbid Terror Cell,” an ISIS-affiliated group authorities say was readying for attacks when it was discovered by security forces, resulting in a clash in which seven terrorists and one policeman were killed. Another five of the people executed had been convicted on murder charges.
Security forces fight Jordan hostage situation at castle in Karak
The executions shocked human rights groups, which recalled that Jordan had maintained a moratorium on the death penalty from 2006 to 2014, during which King Abdullah spoke of doing away with capital punishment entirely.“The horrific scale and secrecy around these executions is shocking,” said Amnesty International official Samah Hadid.But the regime is unconcerned with these sensibilities. Its aim now is to project power and deterrence against ISIS, which Jordanians associate foremost with a video of the group burning captured Jordanian pilot Moaz al-Kasasbeh alive in 2015, a year after Amman joined the coalition against the terrorist group.Jordanian deterrence, and the sense of security in a kingdom that viewed itself as an oasis of calm in a turbulent region, has been shaken by a string of attacks and incidents over the last year, including an ISIS assault last June in which seven Jordanian soldiers were killed at a Syrian-Jordanian border checkpoint. Two weeks earlier, an attack on a Jordanian intelligence installation in the Baqa’a refugee camp near Amman resulted in the deaths of five security personnel.But the most jolting attack came less than three months ago, when ISIS gunmen killed seven Jordanian security officers, a Canadian tourist and two Jordanian civilians in an operation that reached its conclusion with a standoff at the Karak Castle tourist site. Four assailants were killed. It was the bloodiest and most audacious attack in years, and its geographic scope laid bare Jordanian vulnerabilities and security flaws.It started in Qatarneh, 30 kilometers north of Karak. Gunmen then drove to Karak and went on a shooting spree aimed at officers patrolling the town before holing up in the castle. Not only were authorities unable to detect plans for the assault, they were unable to prevent it from spreading. No less alarming is that ISIS succeeded in striking in an area that has traditionally been a bastion of support for the regime.In the Karak attack and others, the police were seen as not having performed well and authorities seemed have suffered setbacks in battling terrorism. Asher Susser, a Jordan specialist at Tel Aviv University’s Dayan Center, says the executions may be an attempt to restore standing that was lost.“There was a sense that the deterrence of the regime was undermined and, therefore, there was a need to do something dramatic. The notion that ‘we’re in control’ may have been eroded by recent events in which security forces didn’t perform that well. It seems like there is an attempt to cover for all that with this extreme action,” he said. “I don’t think it broadcasts a message of self assurance and strength. It broadcasts a message of insecurity that they felt forced to take such an extreme measure.”Gabriel Ben-Dor, a Middle East specialist at Haifa University, took a different view.“It is psychologically important for the Jordanian public to show they are fighting back and it’s very important for Jordan, on the inter-Arab front of moderate Sunni countries, to show it is fighting with them and that it is determined and capable of punishing its enemies,” he said.For the regime, the executions are a way of “proving it is stable, strong, determined – that it will stay in power and exercise power vigorously and forcefully,” he continued.“The regime has many people who would support it but are not certain that it is really here to stay, that it is strong and viable, so this kind of activity is helpful to it from that point of view as well,” Ben-Dor added.He doubts the executions will deter ISIS followers from carrying out attacks and says those executed likely will now become martyrs and symbols for them.Despite Jordan’s challenges in dealing with ISIS, the civil wars swirling around it in Iraq and Syria and crises stemming from soaring youth unemployment and an influx of Syrian refugees, the kingdom is still stable, according to Susser.“The general loyalty of the political elite remains as always. There are no cracks in the loyalty of the military establishment, and because of its geopolitical centrality the great powers and powers in the region are deeply interested in preserving stability and providing aid to keep the economy and the regime afloat. This hasn’t changed,” he said.