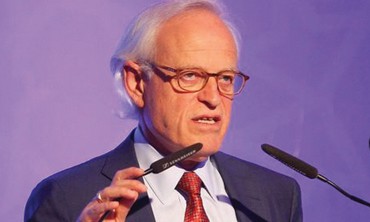 The US State Department is denying an online news report by a right-wing web site that claims that it overheard Martin Indyk, Secretary of State John Kerry’s chief envoy to the failed Israeli-Palestinian peace negotiations, “bashing Israel” and blaming Prime Minister Binyamin Netanyahu’s government exclusively for the breakdown in talks.According to the report, which appeared Friday in The Washington Free Beacon, Indyk was heard unleashing a “nasty” tirade against Israel at a Washington bar during a night out with staff members.  The Washington Free Beacon reported that Indyk made the remarks at the bar of a Ritz Carlton hotel shortly after delivering an address to the Washington Institute for Near East Policy.“The tone was nasty,” the source told the site.Indyk was heard “openly blaming” Economy Minister Naftali Bennett and, presumably, Construction and Housing Minister Uri Ariel for “sabotaging the negotiations” by pushing forward construction projects in east Jerusalem.“In the 30-minute conversation, no one at the table mentioned a single wrong thing the Palestinians had done,” the Washington Free Beacon quoted its source as saying.“There was no self-criticism whatsoever.”Indyk’s staff members were overheard saying that “they knew the truth” as to why negotiations had failed – Israeli settlement construction, which came “way before” Palestinian Authority President Mahmoud Abbas applied for official membership in 15 international treaties and conventions and just as Jerusalem and Ramallah were on the verge of consummating a deal for the fourth security prisoner release.“What you’ve heard is categorically false,” State Department spokeswoman Marie Harf said. “It didn’t happen, period.”Indyk told the Washington Institute for Near East Policy gala that neither Israel nor the Palestinians sense urgency in their pursuit of peace.“The parties, although both showing flexibility in the negotiations, do not feel the pressing need to make the gut-wrenching compromises necessary to achieve peace,” he said. “It is easier for the Palestinians to sign conventions and appeal to international bodies in their supposed pursuit of ‘justice’ and their ‘rights,’ a process that by definition requires no compromise. It is easier for Israeli politicians to avoid tension in the governing coalition and for the Israeli people to maintain the current comfortable status quo.“If we, the United States, are the only party that has a sense of urgency, these negotiations will not succeed,” Indyk said.