US, Russia agree to 'cessation of hostilities' in Syria

The parties also agreed on ways to accelerate the delivery of humanitarian aid to regions of the country that have gone without for months. 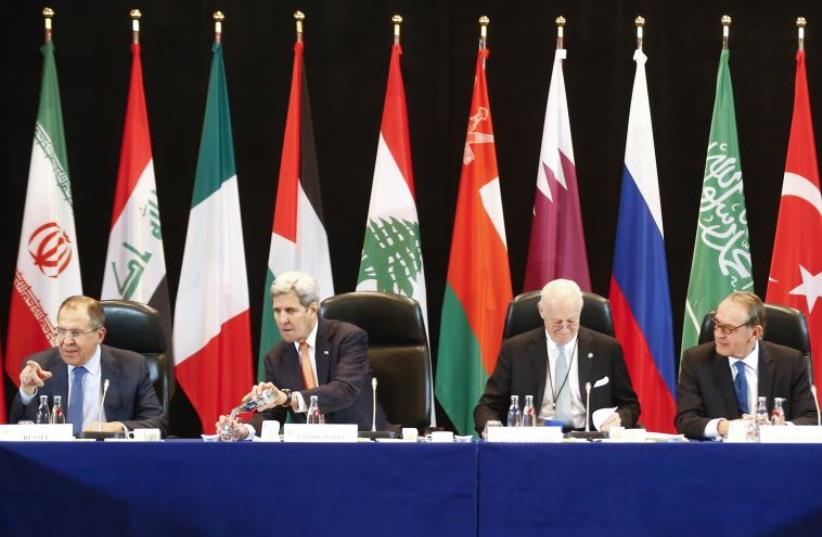 Russian Foreign Minister Sergei Lavrov (L) and U.S. Foreign Secretary John Kerry (2L) attend the International Syria Support Group (ISSG) meeting in Munich, Germany, February 11, 2016, together with members of the Syrian opposition and other officials.
(photo credit: REUTERS)
Advertisement
NEW YORK -- Belligerents in Syria's civil war have agreed to work toward a nationwide cessation of hostilities there "in one week's time," US Secretary of State John Kerry said at a press conference in Munich on Thursday night.Sitting alongside Russian Foreign Minister Sergey Lavrov, Kerry said the parties also agreed on ways to accelerate the delivery of humanitarian aid to regions of the country that have gone without for months."We believe we have made progress both on the humanitarian front and on the cessation of hostilities," Kerry said. He explained the difference between a cessation of hostilities and a ceasefire: "A ceasefire," he said, "has a great many legal prerogatives and requirements. A cessation of hostilities does not."

The #ISSG agreed that urgent delivery of humanitarian aid in #Syria will begin this week.

Lavrov told journalists that the "real test will be how we implement what we have agreed." The modalities of implementing that cessation, both men said, have yet to be determined.Lavrov also said that halting hostilities in Syria would be a difficult task and that peace talks should resume in Geneva as soon as possible with the participation of all opposition groups."We will only be able to see whether this was a breakthrough in a few days," said Germany's foreign minister, Frank-Walter Steinmeier, in a side comment to reporters.Syria's main opposition group welcomed the plan of the major powers according to spokesperson Salim al-Muslat. He cautioned, however, that the agreement must have shown effects before his group would join political talks with government representatives in Switzerland."If we see action and implementation, we will see you very soon in Geneva," al-Muslat said.

The progress we made today in #Munich can and must improve the lives of the Syrian people.

The International Syria Support Group (ISSG), consisting of 20 countries, will within one week negotiate specific modalities for a nationwide cessation of hostilities.In a media note, the State Department noted that the ISSG agreed to begin sustained delivery of assistance this week by air to the besieged areas of Rural Damascus, Madaya, Mouadhimiyeh, and Kafr Batna by land, and continue as long as humanitarian needs persist.Members of the ISSG are expected to use their influence with parties on the ground to work in coordination with the United Nations to ensure immediate and sustained humanitarian access to reach people in need throughout Syria.The Democratic presidential candidates expressed their support of the agreement reached towards the cessation of hostilities in Syria over the course of the Democratic Debate in Wisconsin on Thursday night.Candidate Bernie Sanders congratulated US President Barak Obama and Secretary of State John Kerry on the agreement expressing his hope that the deal will hold while candidate Hillary Clinton conveyed her appreciation for the effort but explained that she is concerned Russia is merely buying time before they continue their bombardment in Syria.  Ministers at Thursday's talks wrangled over three core issues: a gradual cessation of hostilities with a firm end date, humanitarian access to cities being besieged by both sides and a commitment that Syrian parties return to Geneva for political negotiations.Reuters contributed to this report.
Advertisement
Hot Opinion