Idlib province, the only Syrian province that is entirely under rebel control, has been a major target of Russian and Syrian aerial strikes that caused hundreds of civilians casualties. 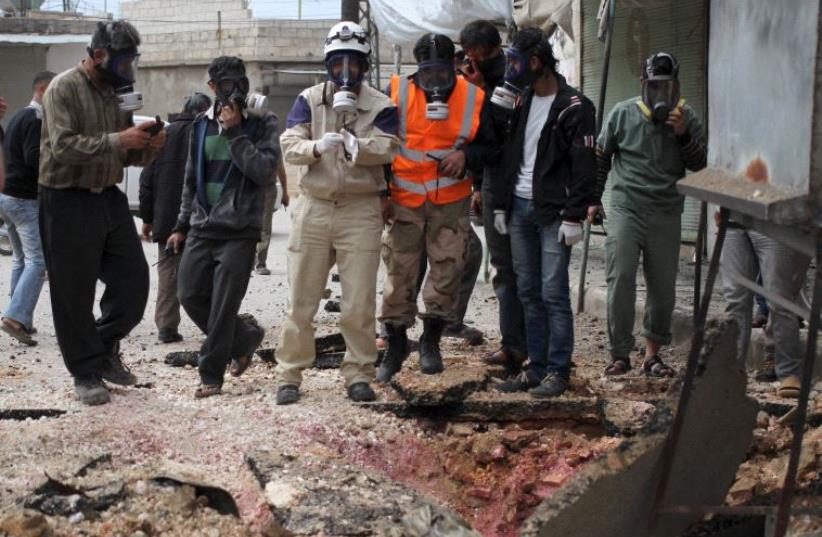 Syrian Civil Defence members wear gas masks near the site of what activists said was a chlorine gas attack in the Idlib countryside [File]
(photo credit: REUTERS)
Advertisement
AMMAN - The United States warned a takeover of rebel-held northwestern Idlib province by Syrian jihadists linked to a former al-Qaida affiliate would have grave consequences and make it difficult to dissuade Russia from renewing bombing that recently stopped.In an online letter posted late on Wednesday, the top State Department official in charge of Syria policy, Michael Ratney, said the recent offensive by Hayat Tahrir al Sham, spearheaded by former al-Qaida offshoot Nusra Front, had cemented its grip on the province and put "the future of northern Syria in big danger.""The north of Syria witnessed one of its biggest tragedies," said Ratney who was behind secret talks in Amman with Moscow over the ceasefire in southwest Syria announced by US President Donald Trump and Russian President Vladimir Putin in July. It was the first such US-Russian effort under the Trump administration to end Syria's civil war."In the event of the hegemony of Nusra Front on Idlib, it would be difficult for the United States to convince the international parties not to take the necessary military measures," the top State Department diplomat said.Mainly Islamist rebels swept through Idlib province in 2015, inflicting a string of defeats on the Syrian army until Russia stepped in to reverse the tide of the civil war in favor of President Bashar Assad.Idlib province, the only Syrian province that is entirely under rebel control, has been a major target of Russian and Syrian aerial strikes that caused hundreds of civilians casualties.The agricultural region had a respite since a Russian-Turkish brokered accord reached last May approved four de-escalation zones across Syria, among them one in Idlib province.Many locals fear the jihadists' hold on Idlib will again make the province a target of relentless attacks by Russian and Syrian forces and turn it into another devastated Aleppo or Mosul.More than two million people live in Idlib, which has become an overcrowded refuge for many of the displaced, including rebel fighters and their families."JOLANI AND HIS GANG""Everyone should know that Jolani and his gang are the ones who bear responsibility for the grave consequences that will befall Idlib," said Ratney, referring to former Nusra head Abu Mohammad al Jolani who effectively leads Hayat Tahrir al Sham.In less than three days Jolani's fighters overran their powerful rival, the more mainstream Ahrar al Sham group, seizing control of a strategic border strip with Turkey in some of the heaviest inter-rebel fighting since the start of the conflict.An emboldened Hayat Tahrir al Sham has sought to allay fears it did not seek to dominate the whole province but suspicions run high among many in the region about their ultimate goals to monopolize power.The jihadists have linked up with Western-backed Free Syria Army (FSA) groups who continue to maintain a foothold in several towns in the province. The south of the region is still in the hands of rival groups, including Ahrar al Sham but the jihadists have been trying to extend their control.Ratney told rebel groups, who have been forced to work with the jihadists out of expediency or for self preservation, to steer away from the group before it was "too late."He said Washington would consider any organization in Idlib province that was a front for the militants a part of al-Qaida's network.The expanding influence of the former al-Qaida has triggered civilian protests across towns in the province with some calling for the group to leave towns and not interfere in how they are run.Nusra and its leaders would remain a target of Washington even if they adopted new names in an attempt to deny Washington and other powers a pretext to attack them, the US official said.The jihadist sweep across Idlib province has raised concerns that the closure of some crossing points on the border with Turkey could choke off the flow of aid and essential goods.Washington remained committed to delivering aid in channels that avoided them falling into the hands of the hardline jihadists, Ratney said echoing similar concerns by NGO's and aid bodies after their recent gains.The main border crossing of Bab al Hawa with Turkey which the al-Qaida fighters threatened to take over has however been re-opened with a resumption of aid and goods to the province that has relieved many people.