US will not 'shave at the margins' for Iran deal, Kerry says

"We are not yet where we need to be" for the US to say with confidence that there will be a comprehensive nuclear deal by the end of the week, Kerry says. 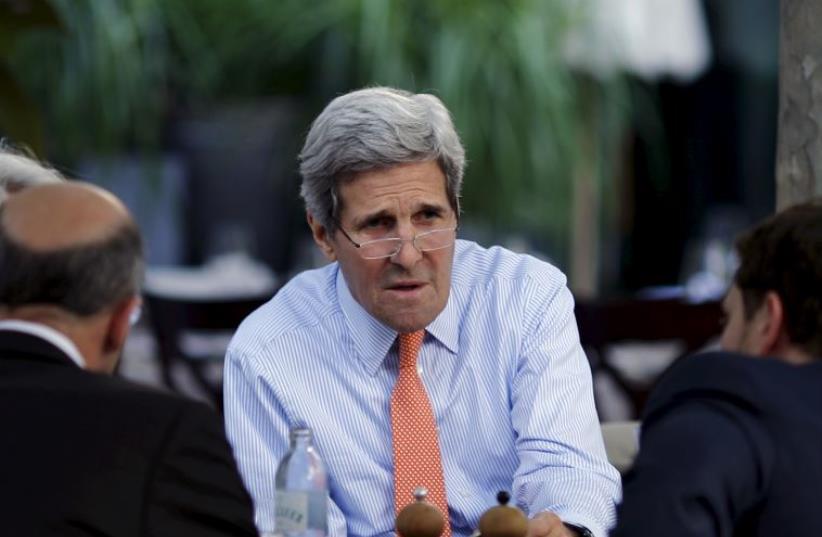 US Secretary of State John Kerry meets with US delegation to Iran talks on the terrace of a hotel where the negotiations are being held in Vienna, Austria July 2, 2015.
(photo credit: REUTERS)
Advertisement
VIENNA – US Secretary of State John Kerry sought to correct the record on Sunday after news organizations reported that a final nuclear deal with Iran was likely and even imminent.Delegates from both Iran and the United States have been quoted anonymously as saying some critical sticking points in the talks were resolved over the weekend.
Michael Wilner reports on nuclear talks from Vienna
But the secretary of state rebuffed that assessment, stating that several of the “most difficult issues” in the negotiations remain unresolved. He declined to specify further.“It’s now time to see whether or not we are able to close an agreement,” Kerry said. “In many ways, this negotiation has been going on for literally a number of years. And, over the past few days, we have, in fact, made genuine progress.”“But I want to be absolutely clear with everybody,” he continued, “We are not yet where we need to be on several of the most difficult issues. And the truth is that while I completely agree with [Iranian Foreign Minister Mohammad Javad] Zarif that we have never been closer, at this point, this negotiation could go either way.”Still, Kerry asserted that world powers and Iran may nevertheless close the historic disarmament deal in the next few days.The US, Britain, France, Russia, China and Germany seek to cap, restrict, monitor and partially roll back Iran’s nuclear program in exchange for sanctions relief, after toiling with the prospect of a nuclear Iran for over a decade. Tehran wants that relief immediately.Kerry’s fellow foreign ministers traveled to Austria on Sunday night in the hopes of sealing the deal. Their goal remains to finish a Joint Comprehensive Plan of Action by July 7 when an interim nuclear deal expires.“ We’re not going to shave anywhere at the margins just to get an agreement,” Kerry continued. “If there’s an unwillingness to move on the things that are important, President [Barack] Obama has always said we’ll be prepared to walk away.”In Jerusalem, Prime Minister Benjamin Netanyahu responded to the same reports of a breakthrough in the talks with a different response: alarm.“It seems that the nuclear talks in Iran have yielded a collapse, not a breakthrough,” Netanyahu said at the opening of the weekly cabinet meeting.“The major powers’ concessions are increasing.”In a reference to the sanctions relief Iran will receive, Netanyahu said, “The deal being formulated will pave Iran’s path to the production of very many atomic bombs and it will also channel to Iran hundreds of billions of dollars that will serve its aggression and terrorism campaigns in our region and around the world.”Netanyahu, alone among world leaders publicly railing against the possible accord, reiterated that what was being negotiated was a “bad deal.”“It is not less bad – in my opinion it is worse – than the deal with North Korea that led to a nuclear arsenal in North Korea,” he said. “But this is both a nonconventional threat and a very large conventional threat against Israel, the countries of the region and the world.”There may still be hope for skeptics, however.“All cards are on the table,” France’s Foreign Minister Laurent Fabius declared as he returned to Vienna. Fabius expects this round of talks to be the very last.“The principle question is to see whether Iran will accept to make clear commitments on what has not been clarified,” Fabius said. “We hope so.”He, like Kerry, did not elaborate.But Iran is understood to be pushing back against granting full access to the UN’s nuclear watchdog, the International Atomic Energy Agency, to verify the completeness and correctness of its nuclear declarations under any future deal. The IAEA says such verification will require occasional access to Iran’s military sites.The IAEA also seeks to complete a retroactive investigation into possible military dimensions to Iran’s past nuclear work. The agency’s director general has said some progress has been made on these issues, but that more work remains.The talks are “supposed to end” in 72 hours, Fabius said.“From tomorrow onwards, the next couple of days we are here to check, to assess, if a deal can be closed. And my message here today is that if a deal can be closed, it’s now.”Herb Keinon contributed to this report.