By OREN KESSLER, REUTERS
JANUARY 30, 2012 05:03
Egyptian elections 521
(photo credit: Reuters/Ahmed Jadallah)
Advertisement
Polls opened on Sunday in the election for Egypt’s upper house of parliament, with Islamists seeking to repeat the success they enjoyed in the vote for the lower house.The parliamentary votes, which began in late November, are the first since a popular uprising toppled president Hosni Mubarak last February.The Muslim Brotherhood, which was banned during his rule, won 47 percent of lower house seats, far more than any other party, in voting that finished earlier this month. A low turnout on Sunday was blamed by some voters on the feeling that the upper house vote now mattered little.The powers of the upper house are limited and it cannot block legislation approved in the lower house.Still, its members must be consulted before lower house MPs pass any bill.Under an interim constitution, both houses are responsible for picking the 100-strong assembly that will write a constitution to replace the one that helped keep Mubarak in power for three decades.“I came to vote today because it is my right and I will be held accountable to God,” said Nour Essam, a 28- year-old university teacher. “But I am sad to see that no one was there at my polling station.”“It is wrong – your vote will matter,” said a young woman. “I will go now and urge all my family members to come and vote.”“The Shura council [upper house] elections are as important as the People’s Assembly [lower house] elections,” said Hussein Ibrahim, a member of the Brotherhood’s Freedom and Justice Party and head of its parliamentary bloc.Voting for the upper house will be held over two stages ending in the middle of February.Ninety of the 270 seats will be decided in the first round of voting on Sunday and Monday, with runoffs on February 7. Another 90 will be determined by voting on February 14 and 15, with runoffs on February 22.The remaining 90 will be appointed by Egypt’s next president, expected to be elected in June, according to a transition timetable drawn up by the military council to whom Mubarak handed over power nearly a year ago.“The elected part of the Shura council will convene without the appointed seats until presidential elections are held and the new president appoints the other 90 members,” said an official from the body overseeing the election.On Saturday, an Egyptian activist who became a symbol of resistance to the army’s trials of civilians vowed he would not keep silent, denouncing the army for detaining and mistreating “prisoners of conscience.”Maikel Nabil has been jailed twice since Mubarak’s ouster on charges of defaming the army, but was pardoned by the head of the ruling army council earlier this month along with almost 2,000 others.In his first public appearance since his release from military jail, the 25- year-old said the army had tortured him in prison. He remained defiant.“We cannot be silent about any violation against us,” said Nabil, whose staged a hunger strike during his imprisonment.Nabil – a Coptic Christian who is a rare pro-Israel voice in the Egyptian blogosphere – was jailed after using his blog to accuse the army of trying to quell the uprising against Mubarak. At the time, most Egyptians saw the army as a neutral force, admired for its role in defending the nation, in contrast to the hated police.But many Egyptians have since been horrified by images of soldiers dragging, beating and firing tear gas at protesters who were demanding a swift end to military rule.Nabil said that during his detention he was given drugs that blurred his mind and was also kept in a psychiatric hospital for some of the time, despite being mentally sound.“This was a tactic to affect my psychological state, to create a kind of hysteria and panic,” Nabil told a news conference in Cairo. “It is unthinkable that such tactics are used in 2011.”He said he was confined for some of the time in a cell one meter by one meter in which a lamp continually flickered.Army sources could not be immediately reached to respond to Nabil’s comments.The rights group “No To Military Trials” estimates that 12,000 people have been referred to military courts since Mubarak’s fall, many more than in the whole of Mubarak’s 30- year rule, when security courts were the favored venue for emergency trials.When he appeared before a military court, Nabil said, he was barred from calling witnesses. He said he had received messages of support from junior army officers who opposed the army’s crackdown on dissent, but did not give details.Nabil described seeing two prisoners being stripped naked and beaten.“It was the first torture incident I witnessed with my own eyes,” he said.Generals who have ruled Egypt since Mubarak’s fall have pledged to move to civilian rule by July. They routinely deny charges of abuses or of trying anyone because of their opinions.International rights groups have accused the army of using heavy-handed tactics, reminiscent of techniques used during Mubarak’s era, to stifle dissent. 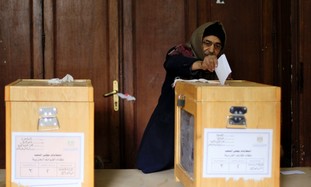