By OREN KESSLER
AUGUST 19, 2011 03:09
Defaced Syria Assad Poster 311
(photo credit: REUTERS)
Advertisement
The Western world has finally found its moral compass in dealings with the Bashar Assad regime, a leading Syrian-American opposition figure said on Thursday, after the US and three European countries called for Assad to step down and Washington unveiled a new set of sanctions.“Finally,” Zuhdi Jasser, founder of the advocacy group Save Syria Now and president of the reformist American Islamic Forum for Democracy, told The Jerusalem Post. “I hope it’s not too late. Hopefully the people of Syria will begin to rebuild their respect for the moral clarity of the leader of the free world.RELATED:
Obama says Assad must go, orders new sanctions
Clinton: US and Israel united in fight against terror“I hope this will give a shot in the arm to the opposition throughout Syria, especially the opposition in Aleppo and Damascus, to reach a tipping point throughout every city in Syria and break the will of the military.” 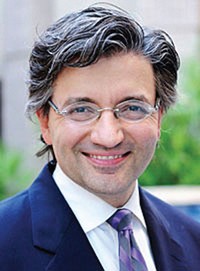 Speaking by phone from his home in Arizona, Jasser – a respected internal medicine and cardiology specialist, and a former US Navy lieutenant-commander and attending physician to the US Congress – said the Obama administration’s next step should be the expulsion of Syria’s ambassador in Washington.“I hope Imad Moustapha, rather than being called the ambassador of Syria, will be called the ambassador of death, and be removed from Washington.I hope the same thing will happen with Syrian ambassadors in Europe, and that we begin to totally isolate them as a pariah regime,” he said. “That way the opposition will know it’s not alone. They have nowhere else to go – they’re not going to go back off the streets, as the regime will just massacre them more quietly over the next few years.”Jasser referred to an announcement on Thursday that the UN Human Rights Council views the Assad regime’s crackdown as constituting possible crimes against humanity.“I was very pleased to see that they’re charging Assad and his fellow thugs with crimes against humanity, but there’s almost a schizophrenia with the UN,” he said. “I think they need to get the hiccups out of their message, I think the UN needs to take a cue from the US statement.“I think now we’ll truly see the hand of Iran and the hand of Hamas, which was silent even after the refugee camp [in the Syrian coastal city of Latakia] was massacred a few days ago,” Jasser said. “As Syrian-Americans, we’ve seen our families in Hama and Homs in our holy month of Ramadan without electricity, surrounded by tanks and unable to know when they’re going to have a meal next. So this is wonderful and welcome news.”In recent months, Jasser has been working with fledgling Syrian exile groups to forge a united front against the Assad regime.“We’ve formed the Syrian Democratic Coalition, which includes not only our own group Save Syria Now, but also the Kurdistan National Assembly, and we’re working with diverse groups including Assyrian Christians and others. I think the next step is not just to convene another opposition conference in Turkey or Brussels, but to bring them to Washington,” the Ohio-born Jasser said.“Even considering the political nuclear winter that there has been in Syria, there are a lot more diverse groups than I think in any other Middle Eastern country, because of the diversity in Syria,” he said. “As much as the State Department can’t be seen as directing this process, it can facilitate it and provide the atmosphere to help the opposition begin to communicate, and to facilitate its growth and maturation.”Jasser, raised in Wisconsin by Syrian immigrant parents, describes himself as a devout Sunni Muslim, but his organization’s unyielding battle against political and militant Islam has placed him in the crosshairs of groups such as the Council on American-Islamic Relations and the Islamic Center of America, which he says have failed to adequately address the “insidious separatism” of political Islam.Jasse, a leading light in America’s small Muslim reformist camp, firmly opposes the view that the Islamic faith is inherently at odds with democracy, but said he shares Western concerns about Islamists gaining power in Syria.“If there’s any group that’s organized there, it’s the Islamists. That’s just how they operate, how they thrived in the underground. Make no mistake, they’re a force to be reckoned with,” he said.For decades Assad and his father and predecessor Hafez brutally repressed Islamist movements, symbolized most powerfully by the 1982 crackdown on the Muslim Brotherhood in Hama that killed tens of thousands.Still, Jasser said he does not expect the Brotherhood to enjoy the kind of support it does in post-Hosni Mubarak Egypt.“It’s very unlikely that an Islamic state will form in Syria. The Muslim Brotherhood has much less support there than in other Middle Eastern countries,” he said. “I think there are a lot of opposition groups that can come together to form a federation. Most of us hope it will be a federated Syria that works through a diverse, Western-form constitution.”

Click for full Jpost coverage of turmoil in the Middle EastAn outspoken supporter of Israel, Jasser sits on the board of the Clarion Fund, a New York-based advocacy group that in February released the film Iranium highlighting the threat of Iran’s nuclear program.On Thursday, Jasser denounced the morning’s terrorist attacks that left at least seven people dead and wounded dozens near the Egyptian border.“Our hearts and prayers go to those who were murdered in this heinous crime. The era that we’re in now is one in which we need to come together and build a new Middle East that doesn’t allow barbarians like those that committed this crime to take over and hijack the changes happening in the Middle East,” he said.“There will be no greater challenge to the security of Israel, and the greater Middle East, as each country struggles to get rid of its own oppression. Israel has always been a canary in the coal mine, dealing with the threat of radical Islam. Now each country is going to have to deal with it,” Jasser said.
Advertisement
Subscribe for our daily newsletter