Who's your mummy? Genetic secrets of ancient Egypt unwrapped

The closest genetic ties were to the peoples of the ancient Near East, including Israel. 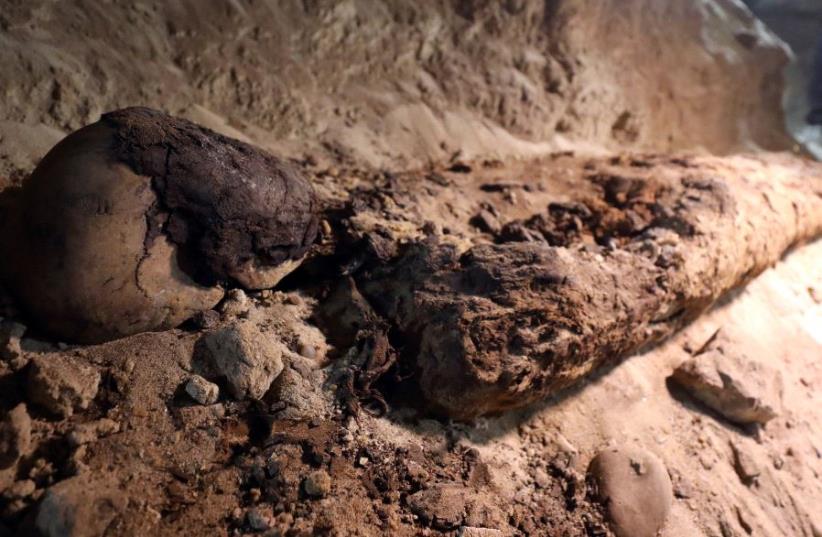 A mummy is seen inside the newly discovered burial site in Minya, Egypt May 13, 2017
(photo credit: REUTERS/MOHAMED ABD EL GHANY)
Advertisement
WASHINGTON - DNA from mummies found at a site once known for its cult to the Egyptian god of the afterlife is unwrapping intriguing insight into the people of ancient Egypt, including a surprise discovery that they had scant genetic ties to sub-Saharan Africa. Scientists on Tuesday said they examined genome data from 90 mummies from the Abusir el-Malek archaeological site, located about 70 miles (115 km) south of Cairo, in the most sophisticated genetic study of ancient Egyptians ever conducted. The DNA was extracted from the teeth and bones of mummies from a vast burial ground associated with the green-skinned god Osiris. The oldest were from about 1388 BC during the New Kingdom, a high point in ancient Egyptian influence and culture. The most recent were from about 426 AD, centuries after Egypt had become a Roman Empire province.
Egypt uncovers chamber of mummies, sees life for tourism (credit: REUTERS)
"There has been much discussion about the genetic ancestry of ancient Egyptians," said archeogeneticist Johannes Krause of the Max Planck Institute for the Science of Human History in Germany, who led the study published in the journal Nature Communications."Are modern Egyptians direct descendants of ancient Egyptians? Was there genetic continuity in Egypt through time? Did foreign invaders change the genetic makeup: for example, did Egyptians become more 'European' after Alexander the Great conquered Egypt?" Krause added. "Ancient DNA can address those questions."The genomes showed that, unlike modern Egyptians, ancient Egyptians had little to no genetic kinship with sub-Saharan populations, some of which like ancient Ethiopia were known to have had significant interactions with Egypt.The closest genetic ties were to the peoples of the ancient Near East, spanning parts of Iraq and Turkey as well as Israel, Jordan, Syria and Lebanon.Egypt, located in North Africa at a crossroads of continents in the ancient Mediterranean world, for millennia boasted one of the most advanced civilizations in antiquity, known for military might, wondrous architecture including massive pyramids and imposing temples, art, hieroglyphs and a pantheon of deities.Mummification was used to preserve the bodies of the dead for the afterlife. The mummies in the study were of middle-class people, not royalty.The researchers found genetic continuity spanning the New Kingdom and Roman times, with the amount of sub-Saharan ancestry increasing substantially about 700 years ago, for unclear reasons."There was no detectable change for those 1,800 years of Egyptian history," Krause said. "The big change happened between then and now."