This is the first election in which women were allowed to vote and only the country's third election overall. 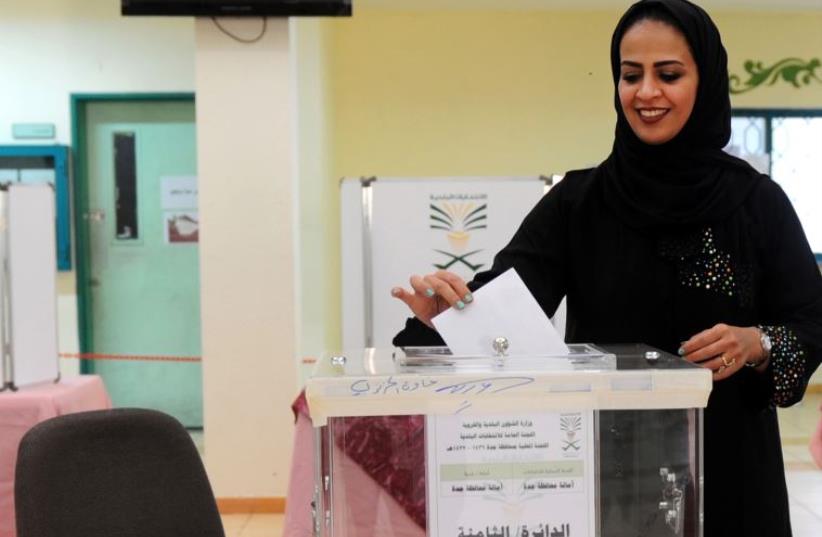 A woman in Saudi Arabia voting for the first time
(photo credit: AFP PHOTO)
Advertisement
A woman in Saudi Arabia was elected to a municipal council in Mecca for the first time, in the country's first-ever elections in which women were allowed to vote, AFP reported Sunday.According to the state news agency SPA, voters elected Salma bint Hizab al-Oteibi for the Madrakah municipal council, a region which is part of Mecca.The election, which follows men-only polls in 2005 and 2011, is for two thirds of seats on councils that previously had only advisory powers, but will now have a limited decision making role in local government.This incremental expansion of voting rights has spurred some Saudis to hope the Al Saud ruling family, which appoints the national government, will eventually carry out further reforms to open up the political system."The adding of women to the elections was a positive thing, we have 47 candidates, 24 men and 23 women. That shows that there is motivation and development," said election observer Mohammed al-Kharji.Saudi Arabia is the only country in which women cannot drive and a woman's male "guardian", usually a father, husband, brother or son, can stop her travelling overseas, marrying, working, studying or having some forms of elective surgery.Under King Abdullah, who died in January and who announced in 2011 that women would be able to vote in this election, steps were taken for women to have a bigger public role, sending more of them to university and encouraging female employment.However, while women's suffrage has in many other countries been a transformative moment in the quest for gender equality, its impact in Saudi Arabia is likely to be more limited due to a wider lack of democracy and continued social conservatism.Before Abdullah announced women would take part in this year's elections, the country's Grand Mufti, its most senior religious figure, described women's involvement in politics as "opening the door to evil".The pace of social reform in Saudi Arabia, while ultimately dictated by the Al Saud, is also strongly influenced by a tussle between conservatives and progressives over how the country should marry its religious tradition with modernity.