Yazidis mark second anniversary of being targeted by Islamic State 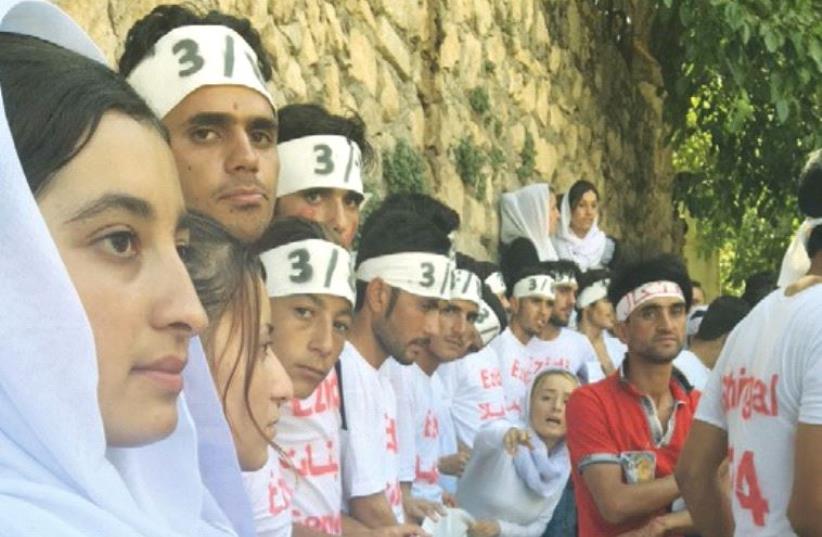 YAZIDI YOUTH demonstrate recently for the recognition of genocide by ISIS at the Lalish Temple in northern Iraq.
(photo credit: SPRINGS OF HOPE FOUNDATION)
Advertisement
Local government leaders, dignitaries, and non-profit organizations convened in northern Iraq this past Wednesday to honor the memory of the thousands of victims of Islamic State’s brutal takeover of the region in August 2014. Multiple ceremonies took place, with some being as simple as lighting a candle while writing the date of “The Black Day” in the sand. Others were more elaborate, such as a ceremony hosted by the University of Duhok, where Kurdistan President Massoud Barzani was in attendance, in addition to prominent spiritual leaders within the Yazidi community, a religious minority that has been heavily persecuted by ISIS.“There was one mother who was remembering the days when they were all trying to escape and stay alive,” says Lisa Miara, founder of non-profit organization Springs of Hope. “She said Daesh came into her village and in her panic, she left her home and she forgot her baby there. Can you just imagine the survivor guilt?” Miara began Springs of Hope with the purpose of reaching out to this persecuted minority, whom she believes has been brushed aside in the midst of tragedy.“For me, I heard rhetoric,” says Miara, who was in attendance at the University of Duhok memorial ceremony.“I heard two ambassadors really patting themselves on the back for what their nations have done. What have their nations done?” Two years ago, the Yazidi families of Sinjar stood no chance when ISIS fighters unexpectedly attacked in the middle of the night, bringing with them a wave of unspeakable violence that led to the massacre, rape, and enslavement of thousands.Now, most Yazidis don’t have homes to return to, even though Sinjar was retaken in 2015 by US coalition-backed Kurdish forces. Instead, many are housed in refugee camps near Duhok, with the hope of one day rebuilding the city that was brutally ripped away from them.“Some of the Yazidis who have gone back to the Sinjar, this tends to be the younger ones, they’re really pressing that this area become autonomous,” says Miara.In remembrance of “The Black Day,” members of the Yazidi population gathered at Lalish, where a temple sacred to their faith is located. A group of Yazidi youth chanted in front of the temple, expressing their need for humanitarian aid as they donned scarves with the number “8-3” painted across them, memorializing the date the ISIS rampage occurred.“Where you see the pain and frustration is when I ran into the Yazidi kids at Lalish. They were shouting, they were demonstrating, they wanted to be heard,” says Miara.Although the Yazidi community has survived thus far, there are still those who are currently captives of the ISIS slave network, most of whom are women. Many family members who were spared this fate are left waiting for their mothers, sisters, or daughters to return home. Some do return, and through organizations like Springs of Hope, survivors are clothed, mentored, and trained in valuable skills such as sewing to rebuild their lives.“They have to be empowered, particularly the women that have come out of Daesh,” says Miara. “They need that attention.They need care, they need to be loved, they need their safe place.”