2,000 turn out for Human Rights March in Tel Aviv

By JPOST.COM STAFF, BEN HARTMAN
DECEMBER 9, 2011 11:02
Human Rights March in Tel Aviv 311
(photo credit: Moshe Rafaeli)
Advertisement
Some 2,000 people turned out for the third annual Human Rights March in Tel Aviv Friday morning.The march is being organized for the third year in a row by the Association for Civil Rights in Israel (ACRI) in collaboration with dozens of other local human rights groups. Organizers say the recent social justice movement that swept the country over the summer, bringing hundreds of thousands of Israelis into the streets, will give the march added relevance.RELATED:
Ten arrested in Tel Aviv social justice protestPolice said one protester was arrested for allegedly calling a police commander "Adolf Hitler." The suspect was taken for questioning.Variousgroups representing different sectors participated in the march. Groups associated with Meretz, Israel Beiteinu, African refugee communities, the gay community, and the Israeli-Arab advocacy group Adalah were all present. 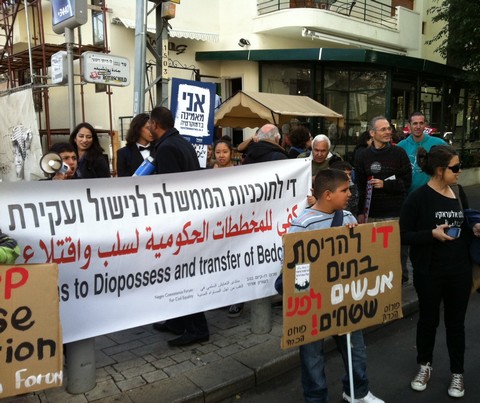 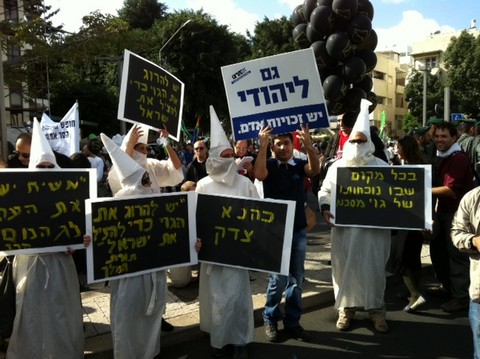 Left-wing protesters mocking the Right with 'KKK' outfitsThe marchers gathered at Habima square, the nexus of the summer’s social justice movement, and made its way to Rabin Square for a midday protest. 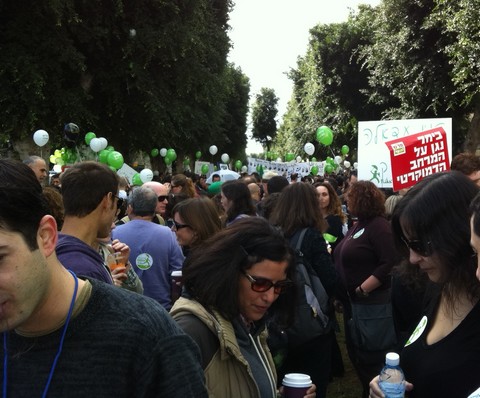 The Tel Aviv Human Rights MarchAlso marching in Tel Aviv Friday were a group of settlers demanding that they too be guaranteed human rights. The group raised signs reading "Human Rights: Also for Migron Residents" and "Settlers are people too." 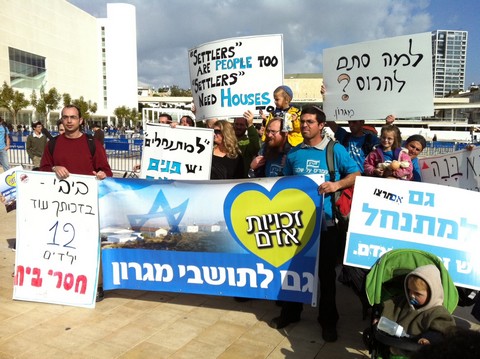 Migron settlers demanding human rights in Tel AvivLibby Lenkinski, ACRI’s director of international relations, said Thursday that a lot had changed since last year’s march – “mainly that hundreds of thousands of Israelis now know what it feels like to get off the couch and march in support of something. Hopefully some of that energy will translate tomorrow, both in numbers and energy.”Lenkinski said she believed the march was coming at a time when “Israel’s democratic principles are increasingly being called into question,” citing what she referred to as “anti-democratic trends in legislation in the Knesset [as well as] a public atmosphere that is hostile toward civil society organizations and human rights organizations in general.”She said that anti-democratic legislation was broken down into four categories: legislation like the Nakba Law and the loyalty oath, which target the country’s Arab minority; laws like the boycott and foreign funding laws that target civil society and NGOs; legislation that limits the power of the High Court of Justice; and legislation that limits freedom of speech.Sunday will see a number of additional protest actions, directed at what organizers say are the worsening socioeconomic gaps in society.Under the banner “Fed up with mortgages – let’s strike back at the banks with a consumer boycott,” a protest set for Sunday will begin with participants placing repossession notices on banks in their area.Also Sunday, a group of protesters will be demonstrating outside the Israel Business Conference in Tel Aviv, in a call for social and economic reform.
Advertisement
Subscribe for our daily newsletter