Event organized by Combatants for Peace organization aims to demonstrate empathy and mutual respect between the two peoples.

Video streaming by Ustream Some 3,000 people attended an annual joint Israeli-Palestinian Remembrance Day ceremony in Tel Aviv on Sunday evening, in an alternative event that seeks to demonstrate empathy and mutual respect between the two peoples. Jewish and Arab Israelis attended the event, along with Palestinians from the West Bank. This is the ninth year that the Israeli-Palestinian organization Combatants for Peace has held this ceremony, which has drawn increasing participation and attention each year, this year so much so that there was not enough space to seat everyone who attended, in the designated hall at the Israel Trade Fairs and Convention Center.
Speakers comprised bereaved Palestinians and Israelis who have lost family-members in the conflict. Among these were: writer and author Rubik Rozental, who lost his brother Gidon in the Yom Kippur War; Ahmed Al-Halu, an ex-Hamas member turned peace activist who has lost a total of 27 relatives in Gaza; sister of the late Ron Pundak, Michal, who lost her brother Uri in the Yom Kippur War; Bushra Abu-Ayash, whose son was killed in 2008; and Niv Sarig whose brother fell in Tul Karem in 1996. Music performances in Hebrew, Arabic and Aramaic were also put on.
Some 20-30 Israelis protested outside the event shouting "shame on you" and "there is no place for you in the land of Israel", among other slogans. A heckler interrupted Pundak's speech, as she was saying how glad she was to see so many young faces in the audience. The heckler shouted, "You should tell that to the Fogel family," who lost five members in a brutal terror attack in the West Bank settlement in Itamar in 2011.
Abu-Ayash from Beit Umar, Hebron, spoke of the loss of her eldest son Mohamad, who was shot by an IDF soldier near his house at the age of 18, in 2008. She spoke of her encounter with Israeli bereaved mother Robi Damelin, a member of the Bereaved Family Forum, whose son was shot to death by a Palestinian sniper at the age of 28. When the pair made contact and shared their stories, it was the first time Abu-Ayash had ever spoken to a Jew. 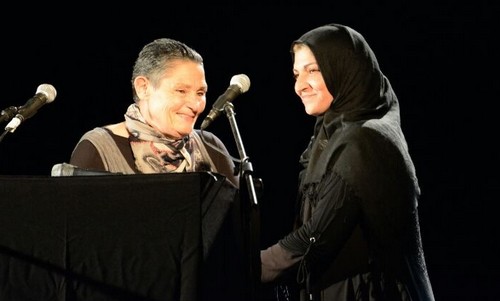 "She showed me a photo of her son and I showed her a photo of my son," Abu-Ayash recounted. "Robi told me: 'You are a bereaved mother and I am a bereaved mother. We need to stand together in order to end it and [so that] other mothers don’t become bereaved as well.'" "I’ve decided to join the Forum so other mothers don't become bereaved," Abu Ayash continued, "and won’t feel this burning fire that is within Robi and within me, no matter if they are Jewish or Arab. In the end we, the mothers, are the victims."
For his part, Rozental said that he had abandoned attending official state ceremonies years ago, because they "revere the eternal young victim sacrificed for the conflict," transforming the loss and agony of war into a national symbol. He explained that he had chosen to participate in the alternative ceremony, because it is the only one that commemorates the victims from both sides. "We only have one war to fight," he said. "And it's a war without guns and without blood, it's a war to end the conflict.“
Advertisement
Subscribe for our daily newsletter