MK Barakeh says Israel Beiteinu "challenges the basic existence of the Arab population;" Tibi: Israelis have a complex, think we want to kill them. 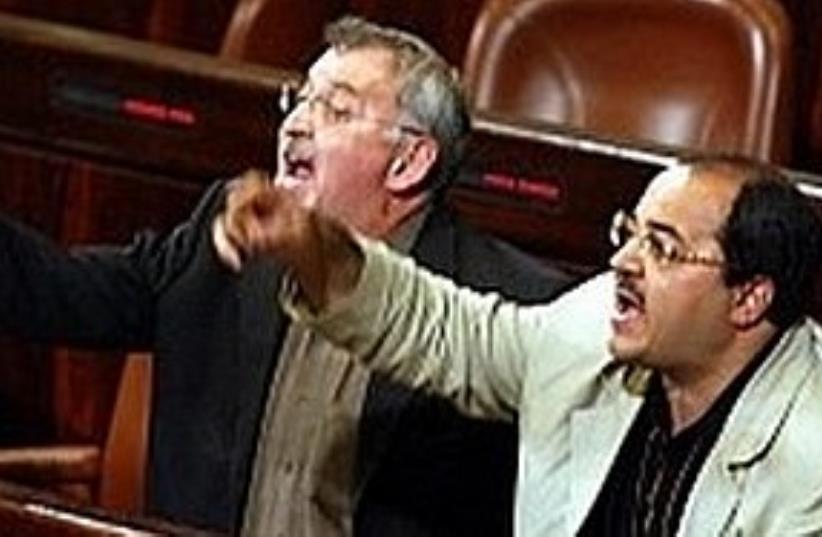 Tibi yelling in Knesset 311
(photo credit: Ariel Jerozolimski [file[)
Advertisement
MK Mohammad Barakeh (Hadash) said on Wednesday that burning pictures of Foreign Minister Avigdor Lieberman, as Arab protesters did at a Land Day protest in Lod, is legitimate.In an interview with Israel Radio, he said that "burning a picture of Lieberman is a legitimate expression of protest against a party that challenges the basic existence of the Arab population."According to Barakeh, "the only policy the government has towards the Arab public is racist legislation in the Knesset."Barakeh also said that Arab MKs will make sure that the Land Day protests will go on as planned, adding that the police should keep a distance and not get involved.MK Ahmed Tibi (UAL-Taal) said that Israelis exaggerated reports of incitement at the Land Day protest in Lod, in an interview with Israel Radio."Many Israelis have a complex - they say after every Arab protest that they heard cries of 'itbach al Yehud' (kill the Jews)," Tibi said. He also denied seeing photos of Lieberman being burnt, but said that "Arab lives are being burnt, because of racist legislation."When asked about "not nice" behavior at protests, Tibi said: "We're not nice, and I don't want to be nice.""We are Israeli citizens, in order to get equality, but we aren't actually equal," Tibi said. "We are also part of the Arab and Palestinian nation. We can be citizens and support the struggle of the Palestinian people."On Tuesday, Nearly 1,500 people took part in a protest march in Lod, which opened the official events of "Land Day."Israeli Arab leaders chose to hold the opening event in Lod, the city which has seen an outcry by some of its residents in months over demolitions and evacuations imposed against Arab residents.Land Day has been a day of protests and general strikes in the Arab sector for more than 30 years, and is held to mark the anniversary of the 1976 killing of six Galilee Arabs in clashes over land confiscations.Knesset members from both Arab and Jewish parties participated in the march as well as those from mixed cities and unrecognized villages.During the protest, some protesters burned photos of Foreign Minister Avigdor Lieberman, claiming that "he is the most racist person in the country."