Thousands of mourners descend upon Sharon’s casket to pay respects

"I think his character is what this country is all about, and that every citizen in the nation can connect to part of this man," says one visitor.

Under a steely gray sky, a somber procession of thousands of mourners gathered Sunday afternoon in front of the Knesset over a six-hour period to pay their final respects to former prime minister Ariel Sharon.The three flags adjacent to his casket were at half-mast, as four armed guards stood at attention at its four corners. Sharon’s coffin, resting on a black pedestal and draped in the Israeli flag, was surrounded by flowers a few dozen meters from the parliament he once led.The eyes of Avraham Zimering, who said he served in Sharon’s brigade during the Yom Kippur War, welled up with tears when asked what he would miss most about the legendary warrior and statesman. 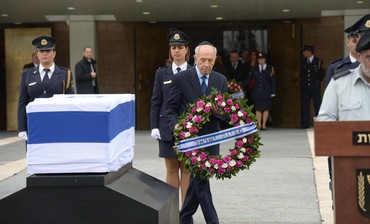 “He was a special man,” said Zimering, as he stared at Sharon’s coffin a few meters in front of him. “He could go against the stream and saw things others couldn’t.”Asked about the most memorable moment of serving under Sharon, Zimering sorrowfully looked to the overcast sky.“I remember hearing his voice during the war: Forward! Push! Push!” he said. “We would have been better off with him leading now.”Indeed, the sentiment that the country would be better off had Sharon not fallen into a coma in 2006 was widely echoed by a cross-section of mourners in attendance.Identical twins Sivan and Moran Drori of Kfar Saba said the current generation of leaders paled in comparison to Sharon.“No people of this generation match his love and commitment,” Sivan said. “Unfortunately, it’s an extreme comment, but it’s true. I have not seen anyone who can match him other than [President] Shimon Peres and [former prime minister] Yitzhak Rabin.”Moran then interjected, conjecturing that if Sharon were alive and well, Israel would be at peace.“He was the only one who could have made peace, because the Palestinians were very afraid of him, but they also respected him,” she said. “He surprised his enemies through brilliant tactics on the battlefield, and he continued on during his political career.”Moran went on to opine that Prime Minister Binyamin Netanyahu did not genuinely want peace as Sharon did.“He is talking out of both sides of his mouth,” she said of Netanyahu.“It doesn’t contribute to the peace process that he’s creating more settlements and shows he doesn’t really want to make further movement [in talks]. And it’s unfortunate because this place could be heaven on earth if we had peace.”Sivan added that it was Sharon’s laser-like focus, sheer will and refusal to be rebuffed by political adversaries that made him Israel’s best hope for coexistence.“We need a strong leader like Sharon because he was able to take action and ignore all the people who were against him,” she said. “Once Sharon had a target, he was all force. Nothing could stop him.”Ron Saxe, who made aliya from Montreal three years ago, said it was important to him to honor Sharon one last time.“It’s called ‘hakarat hatov’ – showing respect,” he said. “He did everything he could for Israel; from the military to politics, he did everything he could do.”Still, Saxe said he did not believe that Sharon – or any other Israeli leader – could have made peace with the Palestinians.“Nobody can do it because the Palestinians don’t want peace,” he contended.“The Arabs don’t want us here, period.”Meanwhile, Chani Ponak expressed conflicting emotions about Sharon’s legacy.“I came here to give him a final show of respect, but I’m doing it with mixed feelings because he gave up Gaza and it hurts,” she said. “But he is part of us – part of Am Yisrael [the Jewish people] – and with the exception of Gaza, he did a lot for our nation.”Responding to assertions that Sharon was the one leader who could have forged peace, Ponak said she was doubtful.“He couldn’t have made peace because there will be no peace ever,” she said. “It says in the Bible that [Isaac and Ishmael], brothers, hate each other and there will never be peace. It comes from there.”While Efraim Naggari, who made aliya from Finland 10 years ago, said he believed Sharon’s 2005 decision to withdraw from Gaza was a mistake, he added that he was less cynical about Sharon’s faculty to create an enduring peace, had he lived.“Only God knows, but I think he had the best opportunity of all the others [prime ministers] because he didn’t just say something – he stood behind his word,” said Naggari. “And I believe Sharon was ready to make peace.”Shoula Gabbay said she viewed the timing of Sharon’s death as symbolic with respect to the floundering peace talks.“I think it’s not a coincidence that Sharon died yesterday, because it’s a symbol for Netanyahu of what he has to do now,” she said. “To not drag his feet. It’s now or never.”Husband and wife Esther and Benny Bezalel said Sharon unequivocally deserved the gratitude and respect of the nation that he served most of his life.“This man was part of this country since the day he was born, and since 1948 he took part in every major war in the top brigades,” Benny said. “He was a great war strategist. Any time there was a war, he led the attack and was the engineer. People will especially never forget when he crossed the Suez Canal in 1973 and saved Israel.”Esther added that his death marked a profoundly sad day for the nation.“This is a sad day for the Land of Israel,” she said. “He was a great man. He was a legend and Israel and its people should never forget him.”The thousands of mourners included a family representing three generations of Israelis. Arie Arieli, 62, was accompanied by his son Amnon, 35, and two grandchildren, Nevo, eight, and Zory, five.“I think Sharon’s character is what this country is all about, and that every citizen in the nation can connect to part of this man,” Amnon said, shortly after he, his father and his two children entered the parliament’s compound to visit the coffin.“On one hand, he was a warrior who protected his home and land without hesitation and doubts. On the other hand, he was a politician who led his people and made a lot of hard decisions.”Asked what he would teach his sons about Sharon’s legacy, Amnon said it would be his unwavering commitment and sacrifice to serve the greater good.“I want to teach my children to understand that to live in this country is a cause, and you need to make an effort,” he said. “You don’t live only for yourself here – it can be in the army, politics or society, but you must make an effort beyond yourself.""This is what Sharon meant to me.”
Advertisement
Subscribe for our daily newsletter