Former president to be under suicide watch in jail, will share a cell with ex-government minister Benizri (Shas).

By YAAKOV LAPPIN
Katsav enters Massiyahu prison_311
(photo credit: Reuters)
Advertisement
A silver jeep with blacked-out windows pulled up outside of the Ma’asiyahu Prison in Ramle on Wednesday. It carried former president Moshe Katsav, who had arrived to begin the first day of his seven-year prison sentence for a rape conviction.“They’re executing a man in the State of Israel,” Katsav told reporters outside of his Kiryat Malachi home earlier.RELATED:Katsav on way to prison: Israel is burying a man alive Analysis:Katsav remains defiant “One day, the truth will come out. I don’t know when. It’ll be with or without me,” he said. “I’ve acted honorably with everyone.”Katsav was sentenced in March to seven years in prison. He has consistently denied any wrongdoing, but three Supreme Court justices ruled unanimously against his appeal last month. He has asked the court for another hearing with an expanded panel.“Today a bloody, unrelenting five-and-a-half- year struggle is ending in frustration and rage. I know, and all who know me know, that the accusations are false,” Katsav said before entering Ma’asiyahu Prison, surrounded by a group of people who arrived to show their support for him. 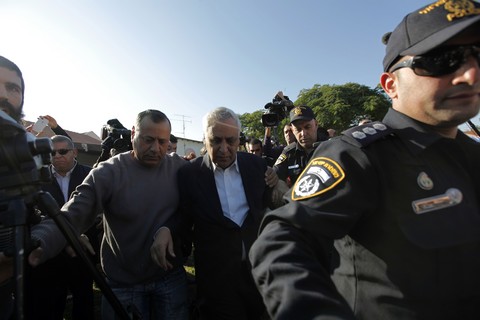 Katsav is escorted by police [Reuters]
“The conscience of those who committed this injustice will certainly awaken and you will see that you buried a man alive.”After entering the facility, Katsav underwent a series of interviews by Prisons Service staff, a source from Ma’asiyahu Prison told The Jerusalem Post. The talks were aimed at appraising his mental health, and preparing him for his new life behind bars.At 2 p.m., Katsav entered the cell in the prison’s religious wing, and greeted his cellmate, former minister Shlomo Benizri. Prisons Service staff hope Benizri will take Katsav under his wing and enable a smooth acclimatization process.“He will be monitored by us, but he’ll receive the same treatment as every other prisoner,” a Prisons Service source said.Katsav is expected to wake up early on a daily basis and take part in morning prayers with Benizri, before spending the day studying Torah at a seminary located in the wing.Should he immerse himself in religious study and respond well to the wing, he will remain there for the duration of his custody. If he shows signs of severe distress, a prison committee will likely transfer him elsewhere.