Livni, Lapid and Peres among leaders that address conference; see the JPost conference in pictures. 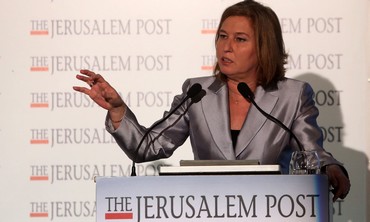 Livni then switched over to the negotiations between Israel and the Palestinians, negotiations for which she has served as the key spokesperson for Israel."We have the force and we have the power, but in order to use this power we must make sure that we have the legitimacy to act," Livni said. These words seemed to address a tendency in international media to portray the conflict as a story of David versus Goliath.While Livni has been a proponent of a movement pushing for 'two states for two peoples,' she said she understood that there is another side to the dialogue and that there are those in Israel who believe in the idea of a greater Israel and are not willing to relinquish territory in peace negotiations. Still, using terrorist attacks as a reason to put an end to negotiations is a mistake, she asserted."Security is not an ideology, it is a necessity, it is something we as leaders need to give to our people," Livni said. The Justice Minister pointed to Syria's decision to dismantle its chemical weapons arsenal as a small sign that there are positive results stemming from international diplomatic efforts to stabilize the Middle East.However she said that the threat of using force, in the case of Iran, is "the best way to avoid the need to use force."She admitted a feeling of uneasiness when US President Barrack Obama displayed a hesitancy to use force as reports of Syria's chemical weapons use began to light up the media. Yet, she ultimately concluded that the positive outcome proved that the right actions were taken.During his appearance at the Jerusalem Post Diplomatic Conference in Herzliya on Thursday, Finance Minister Yair Lapid said that any final-status deal with the Palestinians will not include a partition of Jerusalem. 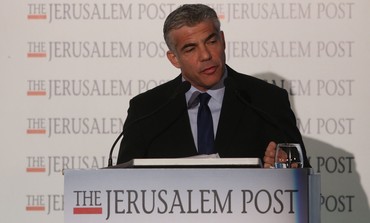 The finance minister did indicate that an agreement would require the "removal of thousands of settlers" from the West Bank.Lapid also lashed out at critics of Israel whom he said fail to understand the "complexity" of the conflict with the Palestinians.Decrying the "BDS influence" on the United Nations, the finance minister said that NGOs see the Israeli-Palestinian conflict through the prism of "strong against weak.""It's a miserable intellectual argument" made by "useful idiots," Lapid said. "The UN isn't leading on the Israeli-Palestinian conflict, but is being dragged along by what turned into the BDS movement."The finance minister said NGOs who criticized Israel's behavior toward the Palestinians were wrong to stay silent on other issues."Why are human rights activists silent over Hamas' killing of gay people in Gaza?" he said.Lapid said that "psychologists and psychiatrists, not security experts" are needed to ensure a smooth dialogue between Israelis and Palestinians, who share a "deep historical mistrust" of one another.The finance minister said that Israeli and Palestinian peace negotiators needed to agree on a map that would display the final borders.Lapid also said he opposed Prime Minister Binyamin Netanyahu's longstanding demand that the Palestinians recognize Israel as a Jewish state."This demand is problematic because it undermines trust," Lapid said. "You don't create trust by insisting others lie to you."Kicking off the conference, Jerusalem Post Editor-in-Chief Steve Linde sat down with President Shimon Peres for an exclusive interview. 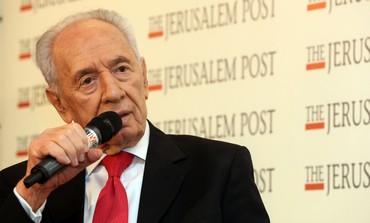 The first topic for discussion was Peres' views on the Iranian threat.Peres spoke of Iran's fears that an Iranian Spring may be in the making as Western economic sanctions are taking effect. "Young, angry Iranians voted Iranian President Hassan Rouhani into office not because he is a revolutionary, but because they believe that Rouhani is a moderate who will bring Iran into the modern world," Peres said. Peres added that young Iranians are less concerned about enriching Uranium and are more worried about making enough money to support themselves.The conversation turned to the issues surrounding the Middle East and Israel's explosive relationship with the Palestinians.Peres expressed his belief that solving the issues that divide Israel and the Palestinians is crucial in stabilizing a volatile Middle East.Another reason to end the conflict is that "it is the central point of criticism the world aims at Israel." Reaching a solution would effectively halt all such criticism, the president said.Peres noted that while Palestinian Authority President Mahmoud Abbas has been branded by Likud Beytenu MK Avigdor Liberman as a 'non-partner for peace,' it is up to Israel to turn Abbas into a partner for peace and to find common ground.At the end of the interview, Peres gave Linde a few tips on how to keep going in old age."Work hard and don't take vacation," Peres said, "I don't see why other people don't do it."
Advertisement
Subscribe for our daily newsletter