By LAHAV HARKOV
Tzipi Livni presides over wedding ceremony of Tsach Sa'ar and Guy Arad.
(photo credit: COURTESY/YONI SHERMAN)
Advertisement
Gay marriage may not be legal in Israel, but Justice Minister Tzipi Livni officiated at one anyway Monday night.Although she wasn’t the bride, Livni wore white lace under the huppa with Tsach Saar, a former aide to ex-Yisrael Beytenu MK Alex Miller, and Guy Arad, an attorney, in Jaffa and united the two men in matrimony – which won’t be recognized by the government.On Tuesday, Livni posted on Facebook a picture of the grooms breaking two glasses next to a photo from her own wedding. 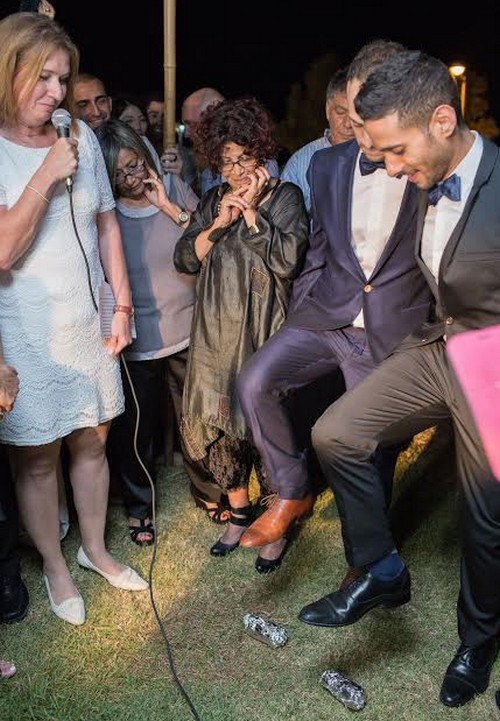 Tzipi Livni presides over wedding ceremony of Tsach Sa'ar and Guy Arad (Credit: Yoni Sherman)“I was under the huppa 30 years ago and yesterday. Then it was personal happiness, and today happiness that I can make other people happy,” she wrote. “At the ceremony, I said that the government cannot give out licenses for love.”According to Livni, “no power in the world can veto love or stand in the way of a couple that is in love and wants a life together.”The Justice minister said that the ceremony was not meant to be a provocation against Judaism; rather, it gave respect to Jewish tradition.“In our eyes, Judaism is open, accepting and respects all people who were created in God’s image,” Livni wrote.Since the latest round of peace talks came to an end, Livni shifted her focus to social issues, including gay rights and conversion reform.