Yisca Levinger's family is one of three moving this week into the building known as the House of Peace by its supporters and House of Contention by its opponents.

By TOVAH LAZAROFF
APRIL 14, 2014 17:12
Yisca Levinger dusts her window sill in Beit HaShalom.
(photo credit: TOVAH LAZAROFF)
Advertisement
Holding a cloth but lacking water Yisca Levinger was busy on Sunday afternoon cleaning her new kitchen in a four-story apartment building in Hebron, from which she had been evicted five years earlier. To Yisca the room is beautiful even though she noted that it, lacked, well, almost everything. The shelves were broken. There was no glass in the windows, no electricity and no running water. The wind easily blew dust into the room. 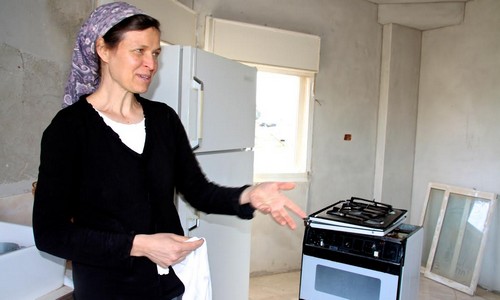 to Nite, me Yisca Levinger holds a dry cloth as she tries to clean her new kitchen in Beit HaShalom, even though the building lacks running water.Still there was some basic items,  refrigerator, a sink, a stove and sweeping views from each window of the West Bank city, that has long been her home.Yisca admitted that she was engaged in kind of a hopeless task under these conditions.“Yes,” she said laughing at herself, “I am cleaning even though there is no water.”But the work, Yisca said, was an expression of her joy.Her family was one of three families that on Sunday began moving into a four-story stone apartment building, known as House of Peace (Beit HaShalom) by its supporters and House of Contention (Beit HaMeriva) by its opponents.They carted mattresses, sofas and refrigerators through the building’s front door only hours after Defense Minister Moshe Ya’alon gave final authorization for Jewish families to live in the structure, located in a Palestinian neighborhood of the West Bank city that is under Israeli military and civil control. It was a move that strengthened Jewish property holding in Hebron, where the settler population barely reaches 1,000 and new homes are rare.A mother of seven, Yisca was busy cooking for the the Pessah holiday when her phone rang with news that she could return to Beit HaShalom.As the news sank in, she felt the hand of God in her life and a sudden surge of hope that redemption was close at hand, Yisca said.“I feel that God is with us, that he is leading us in this very difficult the battle for the Land of Israel,” the mother of seven said as she sat briefly on a green plastic chair and looked the peeling plaster on the walls.Her husband and teenage son carted window frames into the room. Her younger boys sat in the hallway. They had set up laptop on a stack of foam and accessed the internet through a cellphone.Most of her straight brown hair was hidden under a purple patterned scarf. She smiled as she spoke, still amazed at finding herself once more in the building. 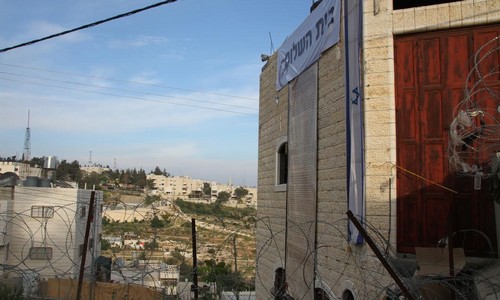 Beit HaShalom on SundayFor years, she said, the apartment as boarded up and only the IDF was allowed access to the structure. As she drove by, she would often glance longingly at the windows of her former home.So even though she had plenty to do to prepare for the holiday, she didn't want to lose even one more minute before standing once more in Beit HaShalom.Her family’s return on the eve of Pessah was not coincidental but part of a divine pattern Yisca said.“It is in this month that the Jews were redeemed and are going to be redeemed. Every new seat in Israel bring redemption closer,” she said. Ya’alon approval ends a decade long struggle by the Hebron Jewish community to validate their purchase of the building from its former Palestinian owners. The Levinger family was one of about a dozen families that moved into the structure in March 2007 before the purchase had been authenticated.Her husband Shlomo Levinger’s family has historically been at the forefront of developing Hebron and the nearby Kiryat Arba settlement. Just before Pessah in 1968 her father-in-law, Rabbi Moshe Levinger, and a group of Jews moved into the Park Hotel in Hebron and refused to leave. Their negotiations with the government led to the creation of the Kiryat Araba settlement.But Yisca said that she had not necessarily known she was about to be part of a new pioneering initiative when she left her Tel Rumaida home in Hebron in March 2007, to explore a new building on the opposite side of the city from where she lived.She so enjoyed the space that she stayed the night in an apartment and then moved her family in. For almost two year they lived there until the security forces forcibly evicted them and other residents of the apartment building in December 2008. 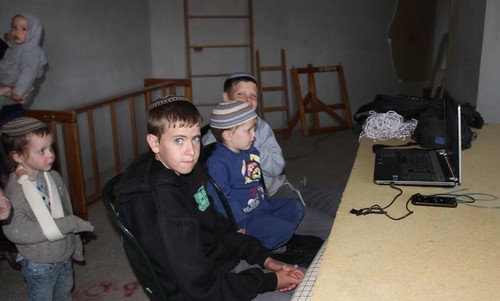 Children playing with a computer in the Levinger's apartment in Beit HaShalom.She recalled how she calmed her younger children with chocolate as the Border Police made a surprise raid on the building.“I told my children that with God’s help we would return,” she said.It was a prediction that came true, she said.“We lived here, exactly here,” said Yisca as glanced around the room. They left so quickly in December 2008, that they didn’t have time to take everything, Yisca said. While the building was gutted in their absence, some odd items remained, like the cabinets, Yisca said. She opened one of the drawers and found it stuffed with shoes they had worn five years ago. It was almost like walking back in time, she said.The Hebron Jewish community together with representatives from the nearby Kiryat Arba settlement held a small celebration in the afternoon to mark their entry into the building. Rabbi Dov Lior placed a Mezuzah on the main doorway leading into the structure. Participants danced briefly and sang religious songs about the return to the land. Among those who were present, was Yisca’s father-in-law, Rabbi Moshe Levinger and her brother-in-law Malahi, who heads the Kiryat Arba Regional Council.But the building still bears many of the scars of the 2008 evacuation. Large concrete barriers surround the top part of the building. Barbed wire still lined the stairwell. Some 600 Border Police officers and IDF soldiers participated in the 2008 evacuation, in which four officers and 23 Jewish activists were lightly to moderately injured. Additionally, at least 20 Palestinians were injured in clashes with settlers in the area of the building.But on Sunday, the hammering and drilling sounds were of re-building and not of destruction . The only question that concerned the settlers that stood in the main stairwell was where and how to hang electricity wires.Yisca said she is not discouraged by the work ahead. She is hopeful that within three months her apartment will be renovated. But in the meantime, she said, she doesn’t mind the dirt and concrete walls. “It is very emotional to be here. It is like the closing of a circle,” she said.