Peres marvels at the miracle of the Arava

Jordanian student shows Peres a plant that she is developing which she believes has cancer curing qualities.

While Prime Minister Binyamin Netanyahu was engaged in secret talks with Jordan’s King Abdullah on Thursday, President Shimon Peres was talking to another Jordanian, 26 year old Zainab Taya, who is doing research what she believes may be a breakthrough in the treatment of cancer.

Taya who is conducting her research at the Central and Northern Arava Research  and Development Center, showed Peres  the Arava plant which she believes has properties which can be extracted for the treatment of cancerous cells associated with breast cancer and leukemia.

Peres was totally fascinated, but no less fascinated than with displays of high quality produce that had been cultivated in the Arava.A farmer himself in his youth, who graduated from the Ben Shemen Agricultural School and who subsequently lived on two kibbutzim, one of which he helped to found, Peres went to celebrate Tu B’Shvat with the farmers of the Arava.“You have triumphed over nature,” he told them. Referring to the difficulties in growing fruit and vegetables in the Arava, Peres was astonished at how farmers working with R&D agricultural scientists and technologists had succeeded in conquering the desert. “Agriculture in the Arava is the most optimistic factor in Israel,” he said. 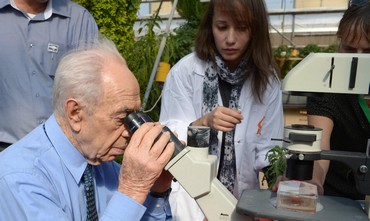