By BEN HARTMAN
JUNE 24, 2012 03:13
Social protesters block Ayalon (2) 390
(photo credit: Ben Hartman)
Advertisement
In what was the most violent encounter between social justice protesters and police since the protest movement began last summer, over two thousand protesters clashed with police in central Tel Aviv Saturday night, against what they said was police brutality at a protest the day before.Protesters broke windows at three different bank branches in central Tel Aviv and managed to block off the Ayalon Freeway for around a half hour during the mayhem. By the end of the night police announced the arrests of 85 protesters, including over 30 who were seen being driven away from the City Hall in a Dan bus that had been commandeered by police. 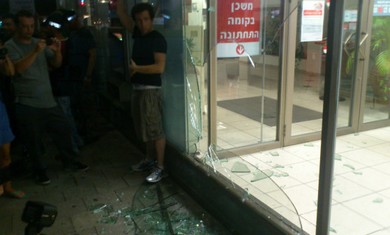 Smashed bank window in Rabin Square.Most of the arrests took place outside the city hall and the Bank Leumi branch at Gan Hair Mall next door, where protestors had rushed inside with a tent and smashed two outside windows. Moments earlier protesters broke the front window of a Bank Hapoalim branch a few meters away, and on the way to the Ayalon two men threw paving stones at a Bank Hapoalim branch of Arlozorov, breaking a window. Protesters also rushed into a Discount Bank branch on Ibn Gvirol, but did not make any lasting damage, mainly just throwing paper in the air and making a mess before they were cleared out.   Despite the large number of arrests, at many times during the night police appeared to hold back, most glaringly during the short-lived blocking of the Ayalon. Police made no arrests of protestors blocking the highway, rather, they allowed them to stop traffic and then march on the Ayalon from Arlozorov train station to the Hashalom exit next to Arieli mall. Among the hundreds of people marching were only a few YASSAM riot police walking along the concrete divider in a single file line. 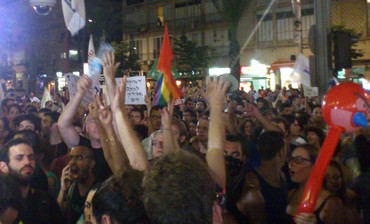 Protesters in Rabin Square.Speaking at a short press briefing held late Saturday night outside the shattered front window of a Bank Hapoalim branch, Tel Aviv District Police Commander Major General Aharon Aksol said that protestors had thrown rocks and spit at police and in general used violence throughout the demonstrations.Aksol said the demonstrators “crossed all possible red lines” adding that police “carried out more than a few arrests tonight and we will work to see that indictments are brought against all of those arrested as soon as possible.” 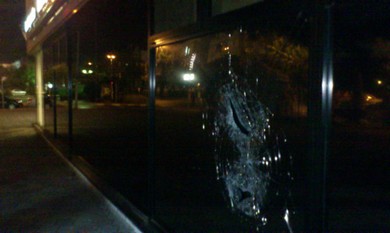 A second bank window, smashed.He said when the march, which began at Habima, reached Ibn Gvirol, “That group of violent thugs who are not from the ‘social justice’ crowd breaking into banks. This group does not really represent social justice.”Aksol said that throughout the night police made the decision to step back and allow protestors to block streets, including the Ayalon Freeway, avoiding a confrontation while allowing the protestors to burn off energy.Saturday night protest took place a day after police arrested protest leader Daphni Leef and 12 others at a demonstration Friday, during which activists attempted to re-establish the protest camp on Rothschild Boulevard that served as a symbol of the 2011 summer protest movement.Leef was also at Saturday night’s protest, where her arm was heavily bandaged from an injury she said she suffered during her arrest. Leef also said the incident left her with two bruised ribs.Police said Saturday night that they did not think that Leef’s arrest had played a role in making the protests the next night as intense as they were, saying that certain protestors had planned ahead of time on making the protest violent.Meretz leader Zehava Gal-On on Saturday slammed the Israel Police’s treatment of social justice protesters on Friday night."The Israel Police is behaving as it would in a police state, rather than a democratic state," she said. "It has become a political repressive instrument of the government, against all groups that protest against it. We saw on Rothschild Boulevard how the police are serving the government rather than the law."Opposition leader Shelly Yechimovich said Friday that evidence was growing to suggest police used excessive violence in their breaking up of a social justice protest in central Tel Aviv on Friday at the site of last summer's Rothschild Tent City.Yechimovich stated that protesters, old and young alike, were beaten, and actor Tomer Sharon and social justice movement leader Daphne Leef were arrested for no reason."Despite the fact that Public Security Minister [Yitzhak] Aharonovitch told me clearly in the Knesset that there was no order from on high to take harsh steps against the movement's protesters, it turns out that the government and its operational branches have decided not to enable the existence of democratic protests this summer," Yechimovich stated.Meretz MK Nitzan Horowitz called the police's arrests of social justice activists on Friday "brutal" and proof that "the government is afraid and doing all in its power to block the renewal of the protest movement."He added: The activists returned to the streets because nothing they were promised last summer was delivered, the situation only worsened."
Advertisement
Subscribe for our daily newsletter