By YAAKOV LAPPIN, JPOST.COM STAFF
JANUARY 8, 2014 11:18
Cars burned in price tag attack Wednesday morning.
(photo credit: B'Tselem)
Advertisement
Less than a day after a lynch was prevented on Jewish settlers in the village of Kusra in the West Bank, a 'price tag' act of vandalism was suspected to be carried out on Palestinian property in another nearby village.In the village of Madama south of Nablus two Palestinian vehicles were burnt out and graffiti was found next to the cars reading "Esh Kodesh", "revenge", and price tag along with a Star of David. 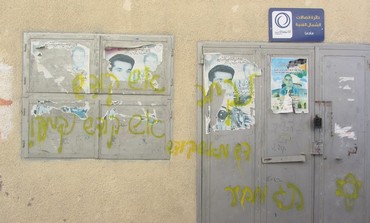 Graffiti in price tag attack.According to what Palestinians in Madama told the IDF, four masked individuals entered the village on Wednesday morning to carry out the vandalism, Army Radio reported. The IDF and Border Police forces have increased their presence in Kfar Kusra
out of a concern that Jewish settlers would try to avenge Tuesday's incident. On Tuesday Palestinians in Kusra prevented fellow villagers from lynching 14 settlers from the outpost of Esh Kodesh The IDF was called in to rescue the Jewish group, who had been cornered in a construction site and beaten.Palestinians alleged the Jewish teens and young adults had entered the village, southeast of Nablus, to carry out a “price-tag” attack. Settlers in turn alleged that the group was hiking in the area when Palestinians forced them to go to the construction site in Kusra. Responding to the violent disturbances in the West Bank Defense Minister Moshe Ya'alon said Wednesday that hate crimes against Palestinians are "terrorism in every way," adding, "We are working, and will work against the perpetrators with zero tolerance and with a determined, firm hand to defeat this."Israel cannot allow a situation in which morally and legally unacceptable actions spring from it, Ya'alon said, adding that the extremists tar Israel and cause serious harm to the mainstream settlement community, whose members are loyal law abiding citizens. "There's no connection between these law breakers and the settlements and their decent residents. "We will not allow marginal, extreme, and violent groups to forcefully and illegally take control of properties that are not theirs, to threaten Palestinian residents who work their lands, and thuggish behavior on the ground, in a way that endangers public peace and which could spark a conflagration," Ya'alon said. He vowed to activate "all available means" to deal with the far-right elements behind the incidents. Elsewhere in the West Bank, an Israeli woman driving east of Kalkilya was injured by rocks thrown at her vehicle on Wednesday morning. The IDF launched a search of the area for the perpetrator. The woman was evacuated to a nearby hospital for treatment.
Advertisement
Subscribe for our daily newsletter