By TOVAH LAZAROFF
West Bank settlement city of Ariel
(photo credit: MARC ISRAEL SELLEM/THE JERUSALEM POST)
Advertisement
The number of new housing starts in West Bank settlements shot up by 123.7 percent in 2013, according to the Central Bureau of Statistics.The bureau published its quarterly report on housing construction on Monday, hours before Prime Minister Binyamin Netanyahu and US President Barack Obama met in the White House. The peace process and settlement building are among the topics the two men were expected to discuss.The release of the quarterly report – published every year at this time – made headlines in both Israeli and foreign media because it happened to coincide with the much anticipated Netanyahu-Obama meeting.The data showed that the number of settler housing starts grew from 1,133 units in 2012 to 2,534 units in 2013.The number of Jewish homes in Judea and Samaria completed last year grew slightly from 1,271 homes in 2012 to 1,365 finished units in 2013.“We have seen more aggressive settlement construction over the last couple years than we’ve seen in a very long time,” Obama told Bloomberg’s Jeffrey Goldberg in an interview that appeared on Sunday.But the spike in settler housing starts actually followed a three-year lull in which the number of new housing starts was at the lowest point in over a decade, according to the Central Bureau of Statistic’s data. 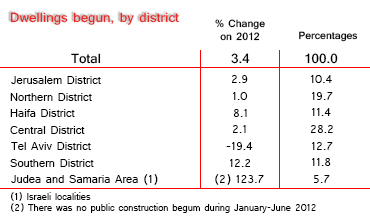 In 2008, during the Annapolis peace process, ground was broken for 2,324 new settler homes, according to the report. That number held steady into 2009, when new building came to a halt at the end of November with the mandated 10-month moratorium on such projects.After that, there was a dramatic drop to 737 housing starts in 2010, after the resumption of new building at the end of September of that year. The numbers remained low, with 1,110 new starts in 2011 and 1,133 starts in 2012.But full recovery did not occur until 2013, due in part to the authorization of new housing tenders in West Bank settlements. In the first quarter of that year, ground was broken in West Bank settlements for 970 new homes. Since then, there has been a marked decline, with 736 housing starts in the second quarter of 2013, followed by 592 new units in the third quarter and 238 in the fourth quarter.The number of finished homes has also been on the decline since the moratorium. According to the report, 2,063 settler homes were completed in 2009, followed by 1,670 in 2010, 1,682 in 2011, and 1,271 in 2012. In 2013, work was finished on 1,365 settlers homes, marking a 7.4% rise from the past year.Left-wing politicians and the nongovernmental group Peace Now, which opposes settlement construction, immediately responded to the data by attacking Netanyahu and calling for a freeze to such activity.“It’s official – the Netanyahu government is committed to only one thing: building settlements. It shows the lack of commitment to negotiations and other issues like the housing shortage inside Israel. The state has focused its resources on construction beyond the Green Line,” Peace Now said.It noted in particular the massive jump in public housing construction in the settlements, from 113 starts in 2012 to 1,161 in 2013.Labor Party chairman MK Isaac Herzog said, “While Netanyahu is sitting with Obama, the truth about his government has been revealed in all its glory with a jump of more than twice the settlements. We go one step forward and several steps back, only now time is running out.”“Congratulations to Netanyahu – he can win the prize for best actor Oscar,” Herzog said. He then continued with that metaphor, referencing the movie 12 Years a Slave, which won an Oscar in the US on Sunday night for the best film of 2013. “Twelve years of slavery is needed to buy an apartment in Israel, unless you live beyond the Green Line. This is not a movie, it’s reality,” he said.In the Knesset plenum, Michal Rozin asked if the government wanted to arrive at a diplomatic solution to the Israeli-Palestinian conflict or to increase settlement building.“And is the Construction and Housing Ministry leaving young adults with no choice but to relocate over the Green Line?” she asked.Construction and Housing Minister Uri Ariel said that the sharp increase in housing starts was a statement about the lack of housing permits the year before. He said he had friends who attacked him for building too little.The attempt by the extreme Left to embarrass Netanyahu before his meeting with Obama would not succeed, Ariel said.The Council of Jewish Communities in Judea and Samaria said that it embraced the report, but noted that the figures were deceptive in that it made it seem as though more building occurred outside the pre-1967 lines than within them. According to the CBS, the 2,534 housing starts in the settlements make up only a fraction, 5.7%, of the 44,343 such units through the country.The council’s deputy head, Yigal Delmoni, said that in reality there were fewer housing starts in West Bank settlements than in any other region in Israel.“We call on the government to immediately publish all the tenders for Judea and Samaria that it has frozen,” he said.Doing so would provide affordable housing close to both the country’s center and Jerusalem, he said.