By JEREMY SHARON
Rabbi Ovadia Yosef 311
(photo credit: Courtesy)
Advertisement
Incendiary comments made by Rabbi Ovadia Yosef, the spiritual leader of the Shas movement who died in October, came to light over the weekend, in which he cursed advocates of legislation to conscript haredi yeshiva students.Yosef was filmed at a brit mila ceremony where he was serving as sandak, and was speaking just weeks before his final hospitalization and death. At the end of the ceremony, Yosef called on God to foil the plans of the proponents of the conscription bill, and then proceeded to quote a biblical verse to curse those pushing for haredi yeshiva students to perform military service.“The verse ‘Pour out your wrath upon them’ should be fulfilled for them,” he said in the video. “Your anger should reach them, chase them with fury and eliminate them, destroy them and subjugate them. Neither root nor branch should remain of them, they should go to their destruction. And you God, cast them down to oblivion.”A video of the brit ceremony at which Yosef spoke was uploaded to the Internet by haredi news website Kikar Hashabbat over the weekend.Yosef was one of the most respected arbiters of Jewish law of his generation, and his charisma and undoubted understanding of aspects of the Torah and the Talmud paved his way to becoming the spiritual leader and ultimate authority of the Shas political movement.His funeral was attended by hundreds of thousands of people from around the country and from across Israel’s religious spectrum.Alongside his Torah knowledge, Yosef was known for his fierce verbal attacks against his opponents whom he frequently denounced in harsh terms. 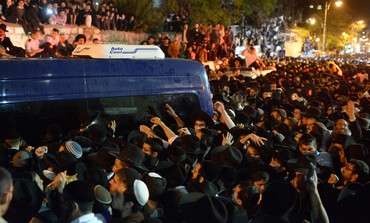