Man is expected to suspend the thought of his finality and look beyond the horizon, beyond the limited human scope 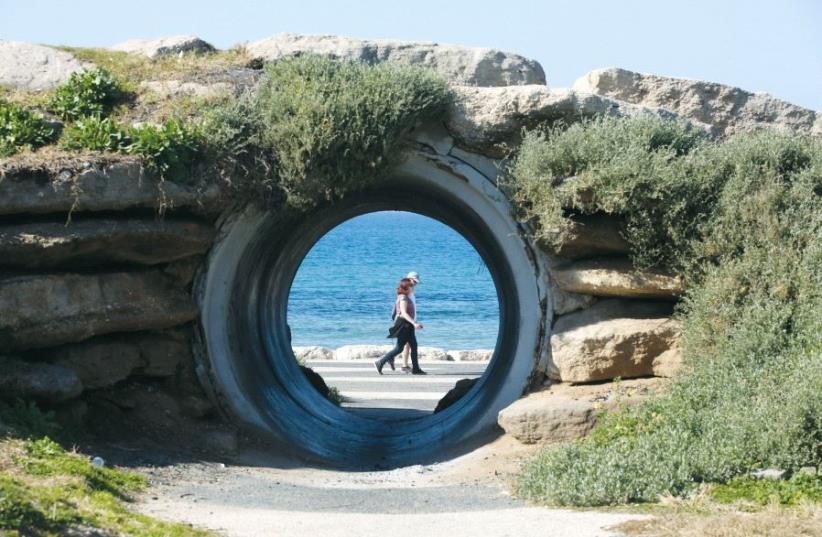 A couple walks near Tel Aviv beach (illustrative)
(photo credit: MARC ISRAEL SELLEM)
Advertisement
The two parashot we read this week – Tazria and Metzora – deal with a list of halachot (Jewish laws) pertaining to purity and impurity. Certain situations in life are considered “impure,” and these parashot guide a person how to purify himself.Contrary to popular belief, it is not forbidden for a person to become impure (other than for a kohen), but if he wants to enter the Temple or eat sacred foods, meaning sacrifices, he must first purify himself.One of the greatest Jewish thinkers and poets of the Middle Ages, Rabbi Yehuda Halevi (Spain, 1075 – Israel, 1141), developed an interesting outlook regarding the concept of impurity, which he explained in his philosophical work The Kuzari.According to him, all the situations that cause a person to become impure are connected with death. Impurity is the reaction to a person’s encounter with death, and the process of purification is a process of distancing oneself from death and returning to life. Indeed, the most severe impurity is impurity from being near death. A dead person is recognized in Halacha as the ultimate in impurity, and a person who touches a dead body, or is in the same house as one, is rendered impure and must go through a complicated process to be purified.Death is an inescapable fact. But how we deal with this fact is subjective. One common way of dealing with death is by negating the significance of life. If we are all ultimately going to die anyway, if everything we do and create is temporary, we cannot escape the thought that life is not eternal. This is a human response we are all familiar with, and it gets stronger when we experience a real encounter with a dead body.How does the Torah deal with this? Does it forbid contact with a dead person?No, on the contrary. One of the most important commandments is accompanying the dead person and his burial, a commandment that cannot be fulfilled without close contact with the dead body.But there is a sacred complex in which this thought cannot exist. This is the Temple. There, there is no place for death, and therefore a person who became impure and wants to enter the Temple must first go through the complicated process of purification.Rabbi Samson Raphael Hirsch, one of the great commentators on the Torah (Germany, 1808-1888), explained that religious experience tends to focus on our lack of power. Faith in God’s unlimited power can bring humans to a state of passivity, as we accept reality and feel tied to it. For this reason, religious priests are part of the cemetery scenery. Death might be considered as interwoven with religious experience.But Judaism is a religion that focuses on life. The Torah is a “Torah of life.” The commandments all guide people to act in a way that does not accept reality but, rather, tries to change it. It challenges death. Man is obligated to act, create, change and build, without considering the fact that life is terminal.Therefore, it is necessary to keep a distance between death and the Temple. The Temple is the center of Jewish life, and death and its influences should not enter it. Had there been a big sign greeting people at the Temple, it would not have said “Welcome” but, rather, “Here is life.”This is a brave outlook that is not easily achieved. Man is expected to suspend the thought of his finality and look beyond the horizon, beyond the limited human scope. God asks man to integrate himself into the master plan which is so much greater than the number of years given to man. This ability could be harmed if the concepts of death, nonexistence and passivity were to enter the Temple.The Temple has not stood for about 2,000 years, but Judaism continues to exist and continues to challenge death. This amazing phenomenon was expressed only a few decades ago when, after the Jewish nation suffered the horrific Holocaust, it regained its strength, returned to the land of its forefathers and built it with hard work and a sense of mission. Those who had suffered so many blows now faced the future, faced hope and the following generations. This was an amazing expression of the Jewish spirit that lived on.Purity and impurity – although they may sound like ancient and irrelevant concepts – have the ability to instill a new spirit in every person, one that inspires faith and confidence. This is the spirit that tells every person: You must live! The writer is the rabbi of the Western Wall and holy sites.