A unique haven for groups and families in the Western Galilee

Han Hagalil is a comfortable hideaway perfect for unwinding in nature. 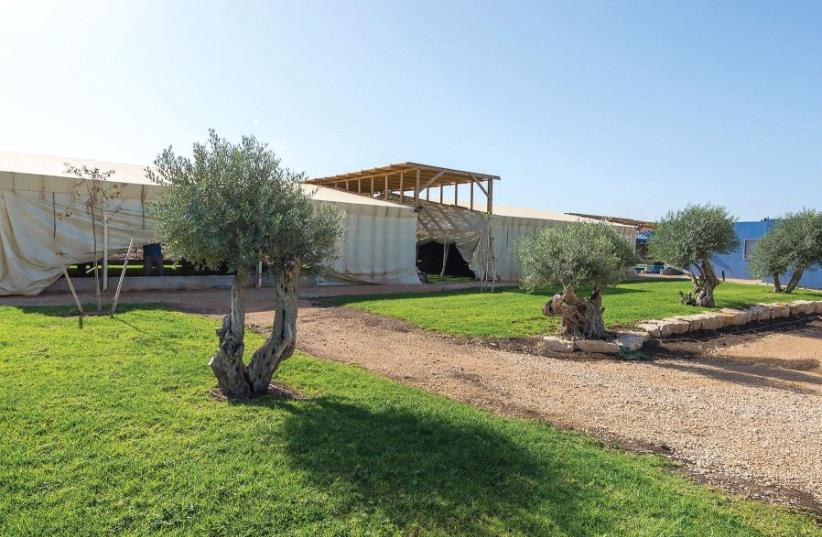 Han Hagalil guest house
(photo credit: Courtesy)
Advertisement
Israel’s Western Galilee region, filled with lush agricultural areas, beautiful beaches and historic cities, is a natural tourist destination for those looking for a break from the bustle and clamor of city living.The ancient city of Acre, the Baha’i Gardens of Haifa and the grottoes of Rosh Hanikra are just a few of the places that should be on any visitor’s must-see list, and there is now a one-of-a-kind guest house perfectly situated in the region for visitors to relax and rejuvenate.Han Hagalil is a guest house and camping spot located in Kibbutz Beit Ha’emek, approximately 20 km.northeast of Acre right off Route 70.It currently features 12 rooms, six suites and four large tents capable of housing between 70 to 80 guests. It is in the final stages of construction and should be finished shortly. Upon completion, it will offer a total of 32 rooms.The property, which encompasses two hectares, also includes designated areas for guests to set up their own tents, and there are bathrooms, showers, as well as sinks to wash dishes available to those patrons.Breakfast is available to all guests for an additional fee.The rooms are clean and comfortable, and are outfitted with a double bed, a couch, a separate bathroom and shower, a small fridge and a TV connected to Yes satellite TV.Upon arriving at Han Hagalil, I was greeted by owner and manager Avner Dahan. He is originally from Avnei Eitan on the Golan Heights, and it is there that he opened his first guest house, Han El Al, in 1998.Avner, who owns Han Hagalil in conjunction with the kibbutz, specializes in leading groups through nature therapy exercises to promote closeness and strengthen the bonds between the participants. Nature therapy, according to Avner, is the practice of simply going out into nature and working to resolve problems in the open air, as opposed to within the confines of work or stressful environments. He explained that people often feel inexplicably freer and more at ease when in nature, and that this peaceful setting can more easily facilitate problem solving and honest dialogue.He gave me a short demonstration as we began our tour of the kibbutz.After tying my hands together with a piece of rope, he tied me to another guest, whose hands were also bound, and challenged us to free ourselves without untying the knots.I immediately admitted defeat at the impossibility of separating two circles without severing the rope, at which point Avner demonstrated that there was a solution and explained to us how this exercise can be used to promote out-of-thebox thinking.After being given a personal tour of the kibbutz by Avner, I was treated to tea at Seor, Beit Ha’emek’s local coffee shop and bakery. Following a delightful tea break, I was introduced to Hillel, who sells handcrafted sculptures made from the wood of the kibbutz’s avocado trees.Hillel offered me a glimpse inside his storage room, which is full of homemade games and puzzles that are only pulled out once a year, at Hanukka, for all kibbutz members to enjoy.Before heading back to my room, Avner and his staff recommended various restaurants in the area and offered suggestions for how to spend the rest of the day, such as venturing to nearby Nahariya, Acre or Rosh Hanikra. There is little to do activity-wise at the guest house, especially after nightfall – however, that is a key part of its charm.Without the allure of restaurants, bars or late-night destinations, I was free to relax and enjoy the silence and serenity that surrounded me. As far as I could tell, there wasn’t even the option to connect to WiFi, which turned out to be a refreshing change and gave me a chance to unwind and listen to the relaxing sound of the rainfall.Breakfast was provided the next morning at the kibbutz’s cafeteria. It consisted of an omelet station, yogurt, cereal, burekas, fresh vegetables and salads, a coffee station and a juice press to make fresh orange juice. Everything was delicious, and the head chef came out to ask how I was enjoying the meal and to extend an invitation for Shabbat dinner, which I unfortunately had to decline. Staff from the guest house also stopped by the table to ask how I was enjoying my stay and to wish me a safe trip home.Han Hagalil is a comfortable and unique hideaway, and the perfect place to unwind in a natural and beautiful setting. Avner’s hospitality and knowledge of nature therapy made the experience all the more unique and enjoyable, and would make the guest house an ideal location for trips aimed at creating a bonding experience for employees, soldiers and classes. The serene nature of the kibbutz would also make for a nice couples retreat or vacation spot for families, especially with the camping facilities. The wide variety of outdoor activities available in the surrounding area, such as rappelling and hiking, provides outdoor enthusiasts with plenty of choices. Han Hagalil is a unique and enchanting spot, and is well worth the visit for those in search of a frillsfree, tranquil vacation in the North.