The celebration of tasting wines from the Jewish state’s leading vineyards is expected to welcome more than 20,000 visitors from Monday, August 17, through Thursday the 20th. 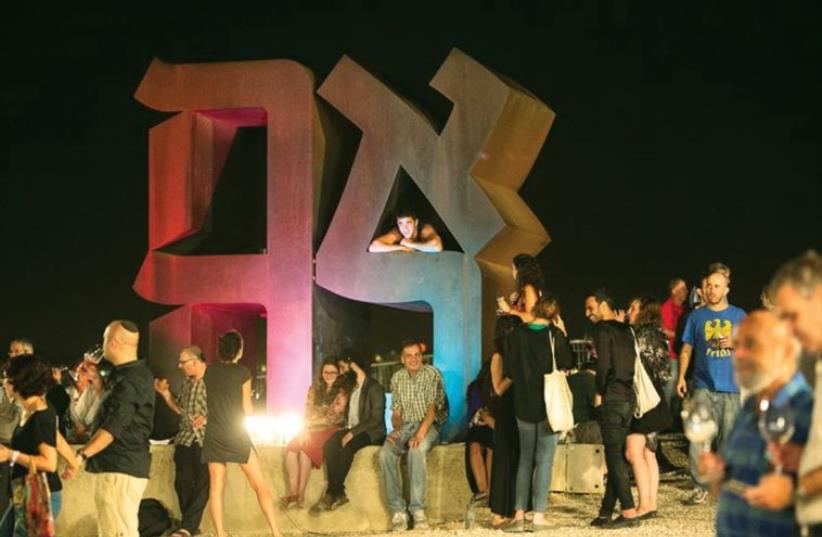 The Wine Festival at the Israel Museum.
(photo credit: Courtesy)
Advertisement
It’s the most wonderful time of the year! No, not the holidays on the horizon, but the advent of the Wine Festival at the Israel Museum.The celebration of tasting wines from the Jewish state’s leading vineyards is expected to welcome more than 20,000 visitors from Monday, August 17, through Thursday the 20th (7-11 p.m.). It all takes place in the enchanted atmosphere of the museum’s Art Garden, with its famed Ahava sculpture, to the sound of live bands and overlooking the twinkling lights of the Holy City.Culture-seekers, mark your calendars for Tuesday night – as the museum’s exhibits will also be open for perusal until 9 p.m.The social event of the summer is in its 12th year, and is especially welcome after tensions in the capital of late. Tickets are NIS 85 and include a wine glass you tote around to the various stands for tastes of each winery’s white, red and rosé offerings – from standard Rieslings and Merlots to special blends and reserves. (You also get to keep the glass at the end of the night, a nice memento.) The pours are usually not too generous. They mean it when they say a “taste,” as each individual wine is meant to be evaluated (seen, swirled, smelled, sipped and spit) and ultimately savored, but you can visit each stand as often as you like. Winery staff will tell you what to look for, but check for hints of flavors as varied as strawberry and licorice.Vendors include Israel’s top wineries; most are kosher, with the few-non kosher varieties explicitly marked as such.In previous years, other delights to sample gratis have included dessert liqueurs, hard cider and chocolate. Additional stands offer foodstuffs for purchase such as cheese (naturally!) and sushi.The event gets progressively more social as the week goes on, with wine aficionados coming in the first few days to avoid the crowds, and people of all backgrounds and ages – particularly singles – traveling in from Tel Aviv and environs on Thursday night, the start of the weekend. Don’t be surprised if you run into a tipsy acquaintance or six. Regardless, it’s all in good fun.Dress to impress in upscale yet breezy casual, such as a colorful summer frock for the ladies and khakis and a button-down shirt for the gents. I recommend a sweater as Jerusalem cools down at night, with the uninitiated tourist sometimes left chilly. The Art Garden’s ground is comprised of pretty yet crunchy rocks that are hard on the glam footwear, so ladies, forgo the heels in favor of cute flats or sandals.I also recommend buying your ticket in advance and coming on time, pretty soon after the gates open at 7 p.m., to quickly pick up your ticket, maximize your time and take in everything there is to offer. Cabs can be a little hard to come by at the end of the night – no one wants to be the designated driver! – so it’s a good idea to leave a few minutes before everyone clears out at 11.Get in the mood for the fest by quaffing a glass of vino at home or with friends, perhaps alongside a screening of the seminal but hilarious wine flick Sideways.A light white that won’t break the bank and is perfect for these summery climes is Tishbi’s Sauvignon Blanc, which you can often find for NIS 55 for two bottles at shops around Mahaneh Yehuda.L’haim! Tickets: http://ticketing.imj.org.il/?culture=en-USTransportation: Bus lines 7, 9, 14, 35, 66