“Cinnamon, apples, dates, pecans, red wine – I declare, you are even better than the real deal!” I thought to myself. 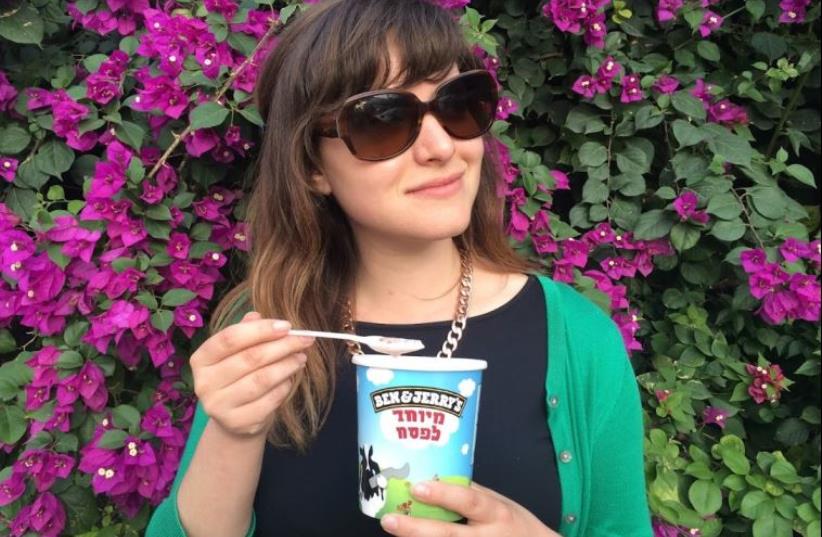 Haroset ice cream? Oy!
(photo credit: JULIE STEIGERWALD)
Advertisement
“Oh, haroset ice cream!” I thought to myself, trying Ben and Jerry’s haroset- flavored ice cream for the first time. My inner voice began to sound like Maya Angelou, leaping and bounding with emotion.“Cinnamon, apples, dates, pecans, red wine – I declare, you are even better than the real deal!” I thought to myself.The likenesses of Ben and Jerry smiled back at me from the carton as I took my first bite. It tasted like a doughnut, perfectly spiced but in the form of ice cream. Swirls of cinnamon ensconced the pecans and danced in a sea of dairy. This modern marvel, now in its second year, is still winning hearts, it seems.Ever since the holiday began, I’ve marveled at how Passover can be the tastiest time of the year, no hametz (leavened food products) required. Walking into most grocery stores, even in the heart of Israel’s supposed “sin city” of Tel Aviv, shoppers can rest assured that the products available are kosher for Passover. Every item is released as a Passover version, from cake to vinegar to ketchup to toothpaste.Most restaurants remain open during the holiday and became a dream for those who don’t eat gluten.Breads made of potato, rice or corn flour are de rigeur at many restaurants as the slices of Passover pizza await their next customer. Matza humbly waits by the side, available for those who desire it.Food is just one aspect of Passover in Israel, albeit a major focus. The holiday energy during the five-day-long intermediate period of Hol Hamoed is palpable everywhere.People look happier as they make their way to the beach or to their places of work, which have undergone a good Passover cleaning. Parents and grandparents can be seen with their young sires riding a train to some adventure or other. Packs of teenagers embrace freedom as they flock to the beach. The air is full of adventure and the smell of barbecues.The Jerusalem Post’s political correspondent, Gil Hoffman, said that he celebrated Hol Hamoed at Waffle Factory restaurant, savoring waffles, pizza and pasta -- all kosher for Passover.Later on, he stopped at McDonald’s, where even the famous golden arches made a holiday switch. “It looks normal, it tastes normal and it’s a joy,” he gushed.“I have not had a single bite of hard matza since the Hillel sandwich,” he said of the ritual sandwich of matza, lettuce and haroset eaten during the Seder.In other words, why settle for the bread of affliction? My memories of Passover outside of Israel involve a constant grumbling in my stomach as I grew sick of matza pizza, matza with cream cheese, chocolate covered matza.Still to this day, the sight of coconut macaroons can send me running.How I dreamed of normal food! Some may frown that today’s holiday substitutes bear such a similarity to the real deal. Others will savor every bite as their ability to observe the mitzva of refraining from hametz becomes one bit easier.