One of Israel’s early entrepreneurs – with over 40 years of experience in founding,co-founding, developing more than 60 hi-tech companies – Yossi Vardi is the co-chairman of DLD Tel Aviv Innovation. 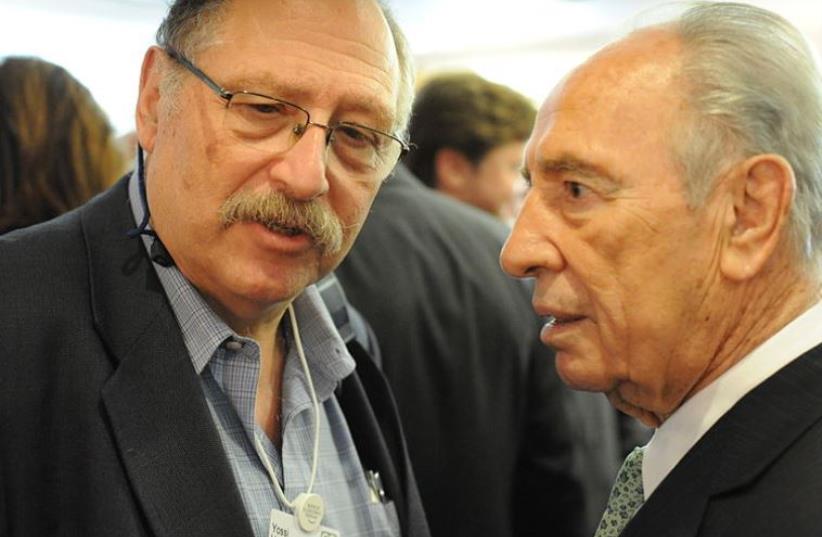 Shimon Peres and Yossi Vardi
(photo credit: ROBERT SCOBLE/WIKIMEDIA COMMONS)
Advertisement
ONE OF Israel’s early entrepreneurs – with over 40 years of experience in founding, co-founding and developing more than 60 hi-tech companies, and who is in constant demand as a speaker at hi- tech conferences in Israel and abroad – Yossi Vardi is the co-chairman of DLD Tel Aviv Innovation. The DLD Innovation Conference will be held on September 8-9 as part of the Tel Aviv Innovation Festival, which will take place from September 6-12 at the Tahana Compound in Tel Aviv-Jaffa, but with meetings and workshops in other locales such as along Rothschild Boulevard. (DLD stands for Digital Life Design.) Participants will include representatives of the coolest and smartest companies, techies, start-ups, designers, artists, innovators, scientists, investors, cultural drivers, geeks, opinion makers and social entrepreneurs from Israel and the international DLD community.This will be the fifth DLD Tel Aviv Innovation Festival, and Vardi has been at the helm of all of them. In addition to its central events, the festival will host numerous co-located events and conferences under the auspices of Israeli and multinational companies and organizations. Among them are the Tel Aviv Municipality, Intel, IBM, Google, Microsoft, PWC, Facebook, Yahoo, Bank Leumi, GameIS (the Digital Games Industry Association in Israel) and a GarageGeeks meeting.Game Development Day has been an integral part of the DLD Tel Aviv Innovation Festival from its inception, always hosting a mix of local and international talent. This year’s GDD will take place on Wednesday, September 9, and will feature an impressive lineup of international speakers plus an Israeli panel that will showcase Israel’s growing game development industry.■ SOME 200 members of Meretz, Hadash and the LGBT community marched from Rothschild Boulevard to Meir Park in protest against racism and intolerance of the other, with particular emphasis on the murders of Shira Banki in Jerusalem’s Gay Pride Parade the previous week, and infant Ali Dawabsha in the arson attack in Duma. They also called for organizations such as the right-wing Lehava to be outlawed.The protest followed the airing on Channel 1 on Friday night of an interview with nationalist settlement leader and former mayor of Kedumim Daniella Weiss , who refused to attribute the arson to the home of the Dawabsha family and murder of Ali to Jewish extremists. The interview took place prior to the death on Saturday of Ali’s father, Sa’ad, who had been treated in the intensive care unit of Beersheba’s Soroka University Medical Center.■ IT’S ONE of those facts of life that children and dogs tend to steal the show from dignitaries and celebrities – and Michelle Raidman Cherney is no exception. Not quite five, Michelle, wearing a dress by Dolce and Gabbana, sandals by Gucci and carrying a small Dior pocketbook, accompanied her famous mother Nicol Raidman to the Shine Horovits photoshop exhibition in the lobby of Habima. Mama Nicol has groomed Michelle on how to pose in front of the camera, and the little girl conducts herself with the aplomb of a supermodel, and diverted attention from celebrities such as Rita and Michal Amdurski .Nicol Raidman came to the attention of the wider Israeli public when she was one of the featured women of affluence in the Channel 10 reality show Meusharot (Rich Women), which illustrated the ups and downs, fears and foibles of some of Israel’s nouveau riche socialites. Raidman inherited her striking good looks from her mother, Victoria.Though not yet 30 years old, Raidman has an impressive CV. She is a businesswoman and philanthropist who owns a high fashion store in Tel Aviv’s prestigious upscale shopping circle Kikar Hamedina. She has been a businesswoman since the age of 18, working as a makeup artist and as a fashion production assistant before opening her own advertising agency and events production company. She has a great gift for producing glittering extravaganzas for whoever has the money to pay for them.In 2008, she entered into a relationship with Russian oligarch Michael Cherney , who is a personal friend of former foreign minister Avigdor Liberman. Cherney is the father of Raidman’s two children. Among the wealthiest people in Israel, Cherney has a very colorful past and is wanted by Interpol for alleged money laundering