“I think we’re kind of confused on how this would happen,” boy's uncle tells Washington news outlet. 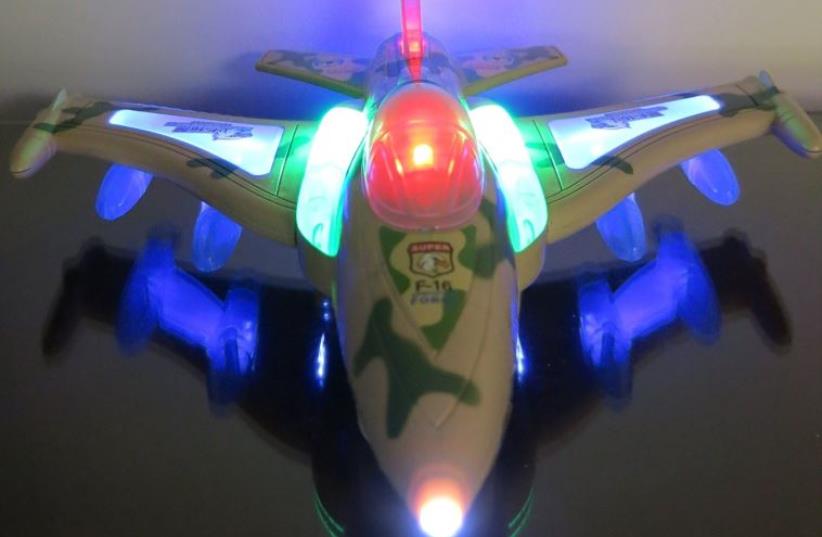 Electric F16 military fighter jet aircraft airplane toy
(photo credit: AMAZON)
Advertisement
An F-16 electric toy jet given to a three-year-old boy in Washington State for Christmas did not emit the expected airplane sounds, but something completely unexpected: the sounds of a Muslim prayer in Arabic.   “It sounds like an Arabic chanting, which is pretty unusual,” Bjorn Thorpe, the boy’s uncle, who gave the toy to his nephew for Christmas, told King5, the NBC Western Washington affiliate.

“I think we’re kind of confused on how this would happen,” he told.    "He just wants a plane," Thorpe said, adding that he expects Amazon to refund their purchase. The toy company, WolVol said the manufacturer must have mistakenly shipped them a bad batch of toys, King5 reported. "This is the prayer you are supposed to say when you are performing Haj," Nadeem Israr, president of the Islamic Society of Whatcom County told King5, referring to the annual Muslim pilgrimage to Mecca.Customer reviews on Amazon expressed both fear and humor at the unexpected praying from the toy plane. Here are a selection of reviews: - Does not make jet engine noises... Plays a very disturbing middle eastern song or chant or prayer... Sending it back ASAP!! VERY disappointed!!  - Very loud Middle Eastern chanting and music! It's weird and scary! This is a very un-American product! I was expecting jet noises, NOT this! The toy is dirty as well. I'm sending it back if I can find the box! - I have been wanting to convert my 3 year old son to Islam for a long time and haven't been able to motivate him to do so. This toy is great it lights up, has a prayer from the Qur'an in Arabic and fun for the whole family! The quality is good for a toy made in plastic and color is great. Thanks for reading and allahu akbar! - Plane has bizarre middle Eastern chanting no jet noises. Plane looks ok and moves around but the chanting is annoying and creepy and you can't turn off the sound.