By YOCHANAN LAMBIASE
Cooking with JPost: Sauteed salmon
Advertisement
Chef Yochanan shows you the secret to cooking a simple, flavor-filled salmon dish with coconut orange cream. The ethnic dish brings out the flavor of the fish and is an exciting twist on a classic meal.
What you'll need:
Two fillet of fresh Norwegian salmon, about 200 gram per portion
Red onion- half, finely chopped
Garlic, sliced
Star anise
Juice of one orange
Salt and pepper
Two slices of fennel - boiled for two minutesCoconut milk
For garnish- thinly sliced orange zest, cooked in mixture of water, sugar and rose water
Step one:
Put salt and pepper on salmon. Heat up pan and place inside. Cook for about one minute on each side until the salmon turns into a golden color. 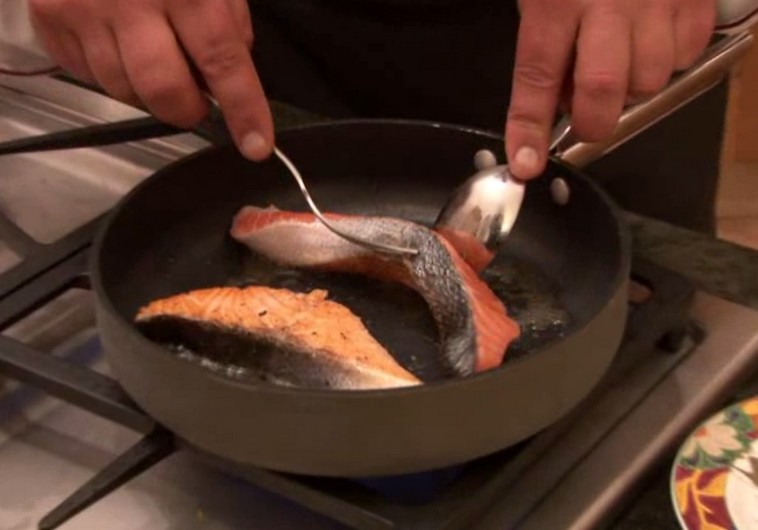 Step two:
Add the star anise and garlic to pan. Add onion as well and sautee for a bit. Then add the orange juice and raise the flame and place a lid over it. Let the dish cook for five to six minutes, so the flavors can become infused.
Step three:
Remove salmon from pan and place on plate. Raise the heat on the pan again and add fennel and coconut cream and let flavors infuse. Depending on taste, add some more salt. Turn off heat and remove fennel and put on plate next to salmon. Then add the orange zest mixture and add the rest of the coconut mixture over the salmon and fennel.

Chef Yochanan Lambiase heralds from five generations of chefs from Southern Italy. He trained under some of the most famous Michelin Star Chefs in the world. He was the founder of the Jerusalem Culinary Institute Chef Yochanan appears regularly on radio and television as well as contributing cooking articles. Now, through the videos of cooking with Jpost.com, Chef Yochanan will guide you through a tantalizing and trendy gourmet kosher experience Contact Chef Yochanan at [email protected] for information about his exciting culinary and wine tasting tours, cooking classes, culinary happenings and out of the box culinary events. Don't forget to visit Yochanan's Facebook fan page for more tricks and recipes!
For information about VIP Chef Services and Events, contact Yochanan at [email protected]
Advertisement
Subscribe for our daily newsletter