Rocker lashes out on Twitter against the controversial anti-Israel activist. 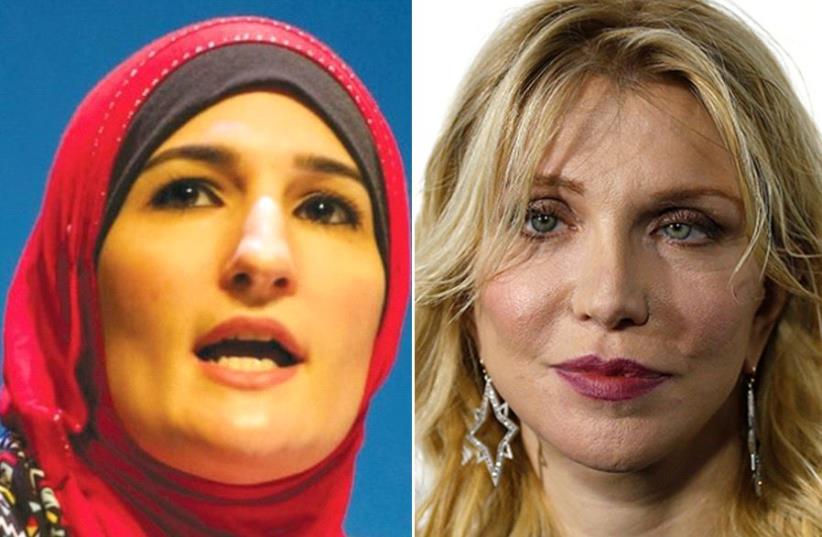 Linda Sarsour and Courtney Love
(photo credit: Wikimedia Commons,REUTERS)
Advertisement
While the actions and statements of pro-Palestinian activist Linda Sarsour have garnered her legions of critics, a new, unexpected voice joined the fray this week: Courtney Love.The singer and musician who was married to rocker Kurt Cobain, took to Twitter on Wednesday to slam Sarsour as a fraud and a “vile disgrace to women and all mankind.”Love’s initial criticism began after Sarsour reportedly raised $80,000 for a Muslim woman she said was a victim of a hate crime. Rahma Warsame, a Somalian Muslim, was beaten unconscious during an altercation earlier this week in Columbus, Ohio, but the details of the case are not clear. The Columbus Police Department said on Tuesday, “There is no evidence at this time suggesting the incident involved any type of bias which would constitute the incident being investigated as a hate crime.”Love, seizing on the story, wrote that Sarsour was a “criminal” for “collecting funds on a made-up hate crime.” She urged her followers to “research more about her ripping people off of thousands for a story that’s not true.”Sarsour herself took to Twitter to say that obviously Love was not on “the side of justice,” since otherwise she would be “demanding accountability 4 brutal assault.” Love responded that Sarsour was a “fraud,” and that she had “zero faith in you and your plight. Very fishy.”Sarsour then slammed Love for her “veiled anti-Muslim rhetoric,” which just riled up the musician even further.“That’s my point,” she wrote, “I never mentioned any religion. You just confirmed to me you’re an antisemite anti American fraud.”In conversations with others on Twitter, Love continued to call Sarsour an antisemitic “fear-mongering liar.” She later referred to her as an “anti-Semitic [sic] terrorist that’s using feminism as a tool to promote her radicalism.”The singer then also retweeted an article from February by reporter Gary Weiss, who wrote in National Review that Sarsour “cynically exploited vandalism of Jewish cemeteries” for her own gain.Sarsour has been a prominent face among left-wing activists, in particular since the election of US President Donald Trump. She was one of the organizers of the January “Women’s March on Washington” held the day after Trump’s inauguration.But she has come under fire for many of her stances and comments, including her support of the boycott, divestment and sanctions movement against Israel. She has said “Nothing is creepier than Zionism,” that Zionism and feminism are incompatible, and has warmly embraced Rasmea Odeh, a convicted terrorist involved in a 1969 bombing that killed two students.While many of Love’s Twitter followers, citing Sarsour’s work on women’s rights and against Islamophobia, urged her to reconsider, Love would not be convinced.“I worked my ass off my entire life to defend women,” she wrote. “I didn’t create fake stories and lie about them nor rip people off financially.”