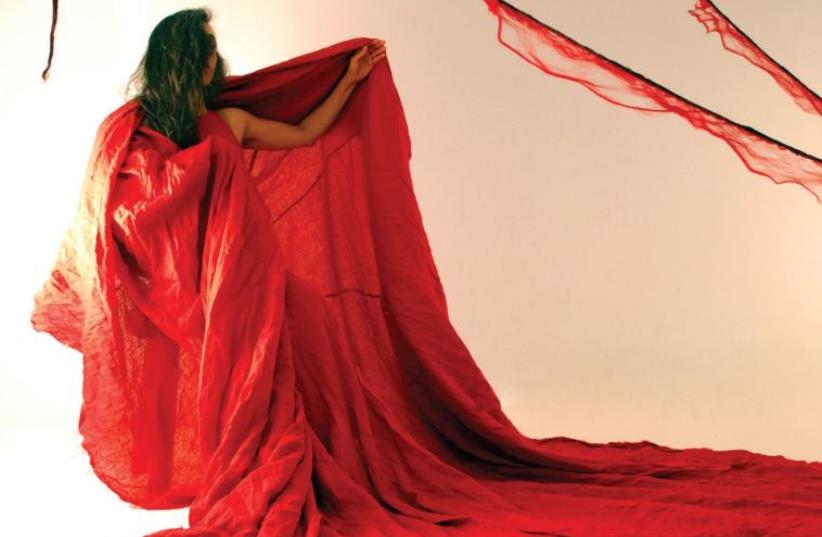 Tamar Borer's mini festival in Haifa
(photo credit: RUSELLO SHMARYAHU)
Advertisement
Sitting in on a rehearsal at Tamar Borer’s south Tel Aviv studio, I became keenly aware of a supernatural presence. Perhaps it was the temple-like cleanliness of the stark white walls that created the sense of otherworldliness in the space. Perhaps it was the haunting voices in the soundtrack of Borer’s new work Hevel or the unbridled intensity in her gaze as she performed. And maybe it was the way the many props – various pieces of textured cloth – seemed to breathe and move on their own.Borer will present Hevel, the fruit of more than a year of work, next weekend at Warehouse 2 in Jaffa. The performance will take place as part of a three-day mini-festival that Borer has carefully curated.Borer, 49, has been creating dance works since 1988. She is a selfproclaimed Butoh artist, having studied the form of Japanese dance theater at length.“I have been practicing Butoh since before I knew what it was,” she says.Next to the door of her studio hangs a small photograph of Butoh legend Kazuo Ohno.“I met him in 1992. We stayed in touch for many years after that and continued to be in touch even after his death,” she says.In her own words, Butoh is the research of consciousness through movement.This year Borer will celebrate her 50th birthday, as well as the 25th anniversary of the car accident that dramatically altered her life. As she performed Hevel, a sleek, black wheelchair stood at the front of the studio.“I was a very wild dancer before the accident. I had studied many techniques around the world, from tribal dancing in Mexico to ballet to traditional Balinese dance. The accident created a lot of inner tension.I had to learn to dance from the nerves and not the muscles. I am very grateful that I came to this situation from something else. It forced me to focus on what there is and not what there is not,” she says.For the past several years, Borer has drawn inspiration for her works from Jewish texts. Her previous two works, Bohu and Emesh, marked the beginning of this exploration. Hevel is the next step in this line of investigation. The work is comprised of two sections inspired by Ecclesiastes and the second from Song of Songs.“I think that the piece goes from something very broad and progresses to something more intimate and passionate,” she says.In the first section, Borer and performer Tanya Plazner move through mental states. Plazner is the catalyst, the caretaker and the witness, while Borer grapples with pain, joy, acceptance and peace.“The piece is about the way that life and death pass one another,” says Borer.Borer began this work last summer as a response to the war.“I am very affected by the political situation. I intentionally expose myself to what’s going on. During the war, I instinctively turned to Ecclesiastes. I thought I could find something in it that would make me feel more balanced. The message of the text is that we should be happy and do good, which really strengthens me,” she says.An enormous red, cloth puddle occupies the front of the stage where Borer begins her journey into the space. This fabric is, in fact, a dress designed specifically for Hevel by fashion icon Sasson Kedem and is worn in the second part of the evening. As Borer settles on a stark white platform, Plazner enrobes her in layers of fabric, first in red velvet and then in creamy wool. A spider-like sculpture of red wool hangs overhead, spreading its tendrils through the air.“Every texture is an expression of life, from the type of thread to its color. I have a history with each and every piece of fabric on stage,” explains Borer.In the second part of the piece, singer and musician Noam Inbar joins Borer and Plazner.“Noam’s presence on stage is very strong. He has this very particular style of singing, which is like anarchistic hazanut. He plays an instrument that is very traditional but manages to create something completely unique and personal with it,” she says.Hevel will be performed on Thursday and Friday nights. Other events to take place over the weekend include a performance of Borer and dancer Tamar Lam’s duet Bohu; a performance of Emesh; Chevel Chavalim by tightrope performer Sergei Klimkin; and a live performance by Noam Inbar’s band GreedyAdam.Tamar Lam will present a photography exhibition of images of her 104-year-old grandmother. An installation of calligraphy artist Kazuo Ishi’s take on Ecclesiastes will be on display throughout the festival.“The idea of this weekend is to take something that is very culturally specific and see how it can be applied universally,” says Borer.

Tamar Borer’s weekend will take place on June 4, 5 and 6 at Warehouse 2 in Jaffa. For more information, visit www.choreographers.org.il.