Rabbi Yuval Cherlow has argued that Jewish law would oppose any call for the direct targeting of the captured soldier. 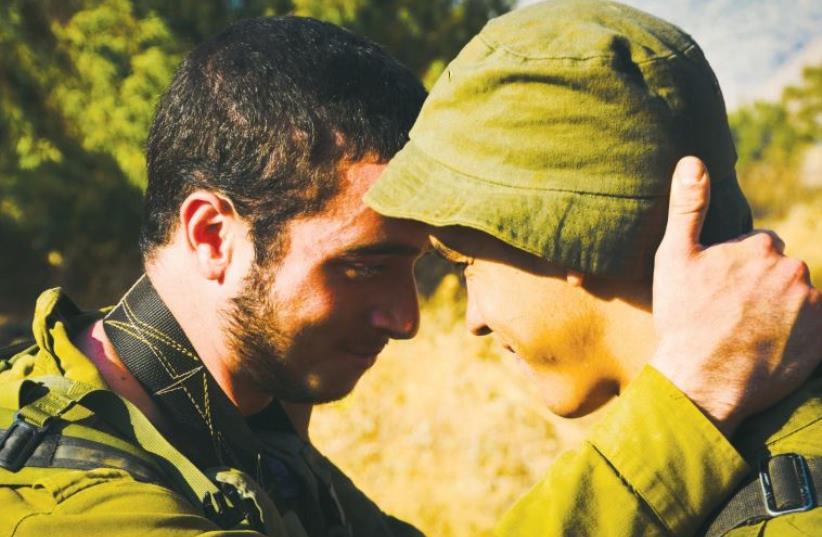 Soldiers embrace after a tough day of training.
(photo credit: ILLUSTRATIVE/IDF FLICKR)
Advertisement
Since it became public in 2003, the so-called “Hannibal Directive” has engendered much controversy, even as it continues to be employed, including in the 2014 Operation Protective Edge in Gaza, following the capture of Lt. Hadar Goldin.According to this directive, soldiers are ordered to do everything to prevent the successful capturing of a kidnapped soldier, even if such measures endanger the soldier himself.Developed in 1996 following the release of terrorists to return the corpses of two soldiers, the protocol was designed to prevent the torment of captivity as well as the emotional debate regarding the extent to which the government must go to “bring home its boys.”Some versions of the directive went so far as to declare, “Better a dead soldier than a captured soldier.” Accordingly, one might even fire directly on the soldier, if no other means could prevent him from being captured alive. Alternatively, threatened soldiers might be expected to drop a grenade and kill themselves and their potential captors.While this variation of the directive was widely disseminated, it was rejected in 2011 by then-IDF chief of staff Benny Gantz, who clarified that the Hannibal directive did not allow directly targeting the hostage. It does allow, however, taking certain risks, such as aiming at the tires of the getaway car or ordering distant snipers to fire on the terrorists, even as this might unintentionally kill the hostage.Prof. Asa Kasher, a major contributor to the IDF’s code of ethics and opponent of directly targeting soldiers, recently revealed that the incorrect implementation of the directive in 2014 led to the death of a soldier, leading to renewed scrutiny of its morality.The Sages asserted that the Bible prohibits suicide within the seven Noahide laws.Yet in the midst of a losing battle with the Philistines, King Saul fell on his sword rather than be taken captive. Similar choices were made throughout Jewish history, including at Masada and during the Crusades.Some commentators asserted that Saul erred by taking his own life. Others, however, believed that suicide is not prohibited under such circumstances. Rabbi David Kimhi contended that since his death was inevitable (and prophesied by Samuel), it was preferable for him to prevent the national shame of being killed by our enemies.Rabbi Shlomo Luria went further to argue that Saul committed suicide to prevent many soldiers from dying while trying to free him.Based on these sources, Rabbi Shlomo Goren argued that captured soldiers may commit suicide rather than submit to captivity, especially if they might be tortured to reveal information that could endanger other soldiers or the home front.This position was strongly opposed by Rabbi Moshe Tzvi Neria, who argued that suicide cannot be endorsed, while further noting that the decision to stay alive is what allowed the Jewish people to survive the Holocaust and other national tragedies.While it seems that at least in one case in 2009 an IDF commander taught his soldiers to drop a grenade rather than be taken captive, this does not seem to be a part of the current IDF protocol.In any case, whatever these sources might suggest regarding suicide, this would not allow other soldiers to actively target a captive, in spite of the potential damage to national interests.This seems to be the logical conclusion of a well-known talmudic passage in which a convoy of Jewish travelers is attacked by gentile marauders and ordered to hand over one Jew or face the annihilation of the entire party. The Talmud rules that all should be killed rather than deliver a Jew to his death. A Jew should not actively cause the death of another, even if this act of omission might endanger others.Accordingly, Rabbi Yuval Cherlow has argued that Jewish law would oppose any version of this directive that would call for the direct targeting of the captured soldier.Rabbi Elazar Goldstein has further noted that such a directive might also dangerously undermine the morale and unity of the unit.That said, Jewish law does permit army maneuvers or operations that might endanger our soldiers, be it the captive or those coming to save him. As Rabbi Shaul Yisraeli has noted, the mitzva of waging war inherently calls upon soldiers to risk their own lives while allowing the government to endanger them for the sake of the greater good.As such, a Hannibal directive that takes on risks of unintended harm remains permissible to prevent the national angst caused by the capture of soldiers.Given the profound ethical dilemmas created by the Hannibal Directive, however, it pays to remember that the sum of the national trauma caused by the capture of soldiers is self-inflicted.Since the Jibril deal in 1985, Israel has repeatedly released hundreds of imprisoned terrorists to return our boys home, dead or alive. Many experts contend that the continued willingness to release dangerous prisoners has only encouraged more terrorism and kidnappings.As I’ve previously argued in this column and in my book A Guide to the Complex, such prisoner exchanges are certainly not obligated by Jewish law, especially when trying to secure the release of a corpse for burial.I hope and pray for the return of the bodies of Goldin and Oron Shaul, but not at any price. The Hannibal Directive is just one more reminder of the dangerous consequences of well-intentioned but ultimately misguided prisoner exchange policies. The writer directs the Tikvah Overseas Student Institute and is a junior research fellow at the Israel Democracy Institute. His book A Guide to the Complex: Contemporary Halakhic Debates (Maggid) won a 2014 National Jewish Book Award.Facebook.com/ RabbiShlomoBrody