THE PROSPECTS of the Jewish state employing torture undoubtedly jolt any student of Jewish history who lacks knowledge of the tactics used by gentiles throughout two millennia of exile. 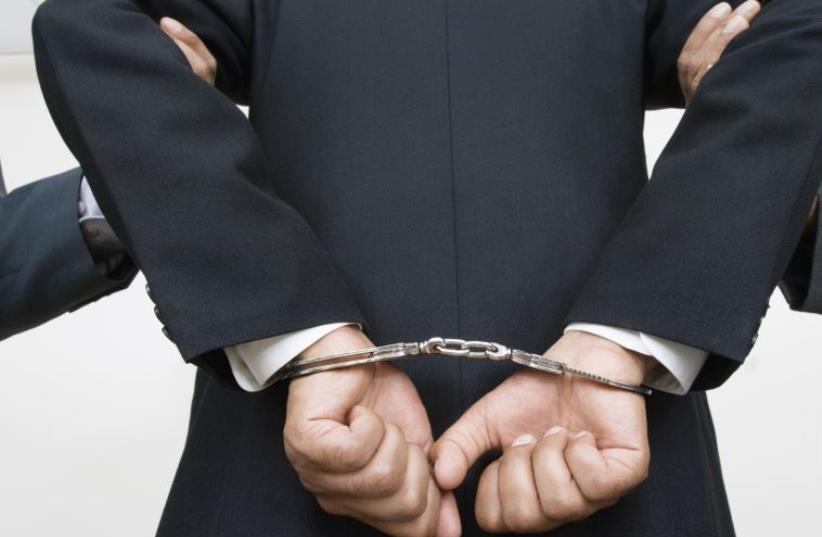 Man handcuffed
(photo credit: INGIMAGE)
Advertisement
The lengthy investigation into the horrific Duma arson attack that killed three members of the Dawabshe family has generated great debate over the propriety of investigative torture. According to the families of detained suspects, the investigators applied various forms of physical and mental pressure – possibly reasonably classified as “torture” – which were defended by government officials who obliquely noted that all actions were under court supervision.Jewish legal opinions regarding the use of such tactics to prevent a future crime or terror attack (whether a “ticking bomb” or otherwise) have been reviewed by this author in Tablet magazine. In this column, I will examine whether Jewish law would accept or allow such methods to investigate past actions and base convictions on them.THE PROSPECTS of the Jewish state employing torture undoubtedly jolt any student of Jewish history who lacks knowledge of the tactics used by gentiles throughout two millennia of exile to compel Jews to issue false confessions to crimes or fake avowals toward other religions. As such, with the challenge and opportunity presented by the reemergence of Jewish power, Israel must examine carefully the tactics used to protect the nation against a range of threats, whether from gentile neighbors or rebellious Jewish citizens.Prima facie, Jewish law does not accept any form of criminal confession, whether coerced or voluntary, under oath in a court of law or in an interrogation room. The Talmud declares that statements of self-incrimination are invalid because “a person cannot turn himself into an evil person.”The sages base this declaration on the biblical requirement for two people to witness a criminal act, as well as the general invalidation of relatives (including the criminal, who is related to himself!) from serving as witnesses.This rule against self-incrimination, which only applies in cases of corporal punishment, but not in monetary matters, is somewhat surprising, since one would expect Jewish law to encourage people to confess their sins and seek repentance.Maimonides asserted that the principle was meant to prevent false confessions by unstable people with a penchant for self-destruction. Rabbi David Ibn Zimra alternatively offered a spiritual explanation: A person may not surrender his body for punishment since his body (as opposed to his money) ultimately belongs to God.As such, one cannot inflict harm on himself, including through self-incrimination.More recently, Prof. Moshe Halbertal suggested that through the analogy of the invalidation of relatives from testifying, the Talmud might indicate that this principle stems from a general respect for the individual not to undermine his own autonomy through the law. Whatever its rationale,it was accepted as a bona fide principle.Yet as Prof. Aaron Kirschenbaum has documented, medieval and modern Jewish communities that retained semi-autonomous penal systems would regularly convict criminals based in part on confessions. Scholars such as Rabbi Shlomo Ibn Adret and Rabbenu Nissim of Geronda asserted that Jewish law recognized the right of a king or government to administer a justice system according to societal needs.As the Talmud states, sometimes the court can punish in spite of the (biblical) law. Otherwise, it would be impossible to convict any criminals if we required two witnesses, an immediate warning before the crime was committed, and a ban on any form of self-incrimination. As proof for this power, many cited the example of King David, who performed executions on two occasions early in his reign based on the admissions of the offenders. To obviate some of the fears regarding confessions, however, many scholars required that there be additional proof or evidence that the confessor in fact violated the law.Given this development, could confessions be accepted even if coerced from the defendant? As Kirschenbaum notes, talmudic evidence remains somewhat contradictory.On the one hand, there is recognition that coerced admissions cannot be taken seriously.On the other hand, there seem to be cases in which force is used to confirm the guilt of certain suspects.Commentators debate whether in these cases actual physical violence was used or if mere threats or other forms of intimidation were employed. In any case, within medieval rabbinic literature, there are sporadic sources that indicate use of physical force, with some figures explicitly asserting that such abilities remain within a judge’s purview. As such, at the beginning of the 20th century, the famed R. Yisrael Meir Kagan summated that an authorized court could cautiously employ force to confirm well-founded suspicions of the accused’s guilt.That said, many scholars raised grave reservations about these tactics. Some worried about their overuse by unscrupulous judges, while others fretted whether excessive force would be used and whether such tactics were actually effective. In the 18th century, Rabbi Yehezkel Landau asserted that such coercions were inadmissible, which, in Kirschenbaum’s assessment, remains the dominant position within Jewish history. That said, it remains difficult to dismiss the major decisors who allowed such coercive tactics, provided that it was performed by an authorized court that acted with great discretion, and only when absolutely necessary.Indeed, beyond the ethics of such tactics, others continue to question whether such means are more effective than more conventional methods of interrogation.That, of course, is a pragmatic question that only security experts, not Jewish ethicists, can try to answer. One hopes, however, that the dilemmas raised within Jewish legal sources can provide a framework for helping Israel confront this issue. ■ The author directs the Tikvah Overseas Student Institute, serves as a junior research scholar at the Israel Democracy Institute, and is a presidential doctoral fellow at Bar-Ilan University Law School. His first book, A Guide to the Complex, received a 2014 National Jewish Book Award.