When it comes to television shows, too often Jewish moms have been depicted as a burden to their children. 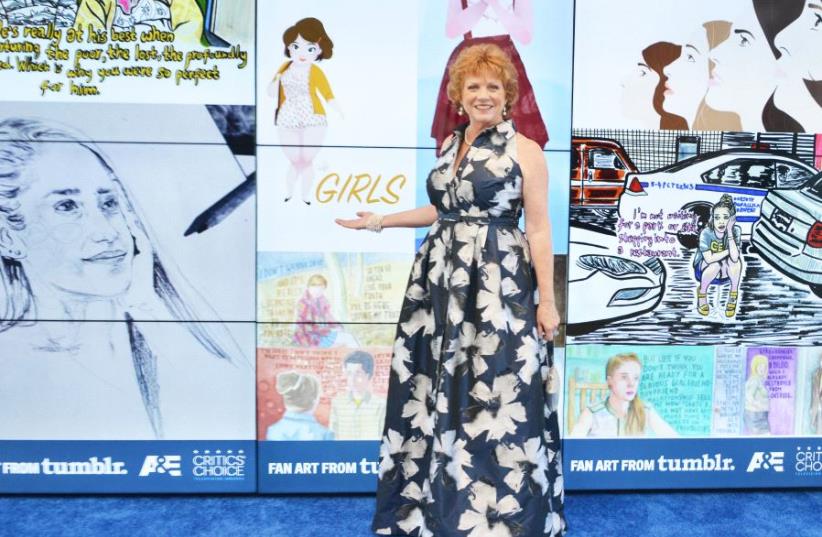 Actress Becky Ann Baker attends the 5th Annual Critics' Choice Television Awards at The Beverly Hilton Hotel on May 31, 2015 in Beverly Hills, California
(photo credit: ARAYA DIAZ / GETTY IMAGES NORTH AMERICA / AFP)
Advertisement
We all know the stereotype of the Jewish mother who constantly finds ways to pester — er, remind — you that you don’t call or eat enough.And when it comes to television shows, too often Jewish moms have been depicted as a burden to their children.Take, if you will, the needling Helen, Jerry’s mom on “Seinfeld,” whose son’s success as a comedian is so unfathomable to her that she begs him to take a real job. Or, better yet, George Costanza’s hectoring mother on the same show — not technically Jewish, it seems, but whom are they fooling?More recently, “The Big Bang Theory” reduced the mother of main cast member Howard Wollowitz literally to a screeching, nagging, nasal voice — she never makes an on-screen appearance — given to cataloging her physical ailments and humiliating her son with Oedipal sexual remarks.Sure, a lot of us see glimpses of our moms in these portrayals, but, let’s get real: Jewish mothers (like everyone, duh) are complex, three-dimensional people.Thanks, in part, to pioneering on-demand streaming services, we’re experiencing a new, golden age of television. The 2010s have blessed us with an abundance of innovative and delightful Jewish shows. But are Jewish moms getting a fair shake? Do these series’ portray complex, three-dimensional Jewish moms?The answer is complicated. While in many ways, television’s Jewish moms have come a long way — witness the first-ever trans Jewish mom on TV! — we still have a way to go. In honor of Mother’s Day, JTA is spotlighting eight portrayals of Jewish moms. These characters don’t all break the mold, but all, at the very least, add an interesting perspective to it.We’ll start our journey through the modern TV landscape with Jewish moms who provide just a slight twist on the age-old archteype, and end up with Jewish moms who are genuinely taking the reins of their stories.Louise Schmidt, “New Girl”Viewers may not have learned Schmidt’s first name until the sixth season of the delightful Fox comedy “New Girl,” but we do get to meet his very Jewish mother beforehand. The reason? Schmidt (Max Greenfield) is trying to (finally) get his bar mitzvah money from his mom but Louise (former SNL cast member Nora Dunn), insists that he (finally) write the thank you notes.True, Louise doesn’t stray far from the stereotype: Her constant feeding is the reason for Schmidt’s former obesity, and her over-critical nature a source of great anxiety. Yet, there are a few twists that make the character interesting, like her obsession with her dog, the probably lesbian relationship she is in (which she is unwilling to admit to) and her evolving, complicated relationship with her daughter-in-law — all of which makes Louise a delight to watch.

In 1949, the first Goldberg matriarch — and one of the first Jewish moms — to hit the TV screen was a force to be reckoned with: Gertrude Berg won an Emmy for her portrayal of big-hearted but overbearing Molly Goldberg.Today’s Ma Goldberg, Beverly (Wendi McLendon-Covey) may not be as groundbreaking as her predecessor, but she shares some common traits with Berg’s character, from her heart of gold to the motherly sleight of hand that allows her to keep her family together — as well as an uncanny ability to ignore and step over boundaries with her children. With her puffy hair and colorful sweaters, she is iconic in a 1980s, suburban kind of way (the ABC series is based upon the childhood of Adam F. Goldberg, the show’s creator).Yet despite often falling into the pitfalls of the overbearing Jewish mom, Beverly breaks the mold with her ability to admit when she’s wrong, as well as her skill at putting her children’s feelings before her own.Naomi Bunch, “Crazy Ex-Girlfriend”

Naomi Bunch, played by the incredible Tova Feldshuh, comes on as a whirlwind of neuroses. Her first appearance on the CW series — with the hilarious song “Where is the Bathroom?” — seamlessly strings together a litany of backhanded compliments and passive aggressive remarks. It takes just a few minutes with Naomi for viewers to understand the origins of the psychological afflictions (anxiety, self-loathing) of her daughter, the show’s main character, Rebecca Bunch (Rachel Bloom, the show’s creator).True, Naomi is not the sort of Jewish mother you would want to have a leisurely Sunday brunch with, but her character stops short of caricature. “Crazy Ex-Girlfriend” also sketches out Naomi’s own rocky past — how she had to cope with her husband abandoning her and raise her daughter alone, giving viewers insight into why she is the way she is.

Dr. Marilyn Kessler, “Difficult People”Every character in this Hulu show is, indeed, a difficult person, and Marylin Kessler, the mother of one of the show’s main characters, Julie Kessler (Julie Klausner), is no different. Portrayed by the indomitable Andrea Martin, Marilyn is a workaholic therapist with dubious ethical standards, as well as a shopping obsession. As a mother, she’s very disappointed in her daughter’s lack of professional focus and unwillingness to spend time with her.Yes, Marylin Kessler is overbearing and tactless — but she’s redeemed, in part, because she’s no more overbearing and tactless than any other character on the show.

Maura Pfefferman,  “Transparent”What happens when a Jewish dad comes out as trans woman? That’s the premise of what’s possibly the most Jewish TV show ever made. The Amazon series follows a Jewish family in LA as Morton Pfefferman (a brilliant Jeffrey Tambor) becomes Maura, and his adult children begin to call her “Moppa,” an amalgam of “mom” and “poppa.”Maura embodies many negative tropes of a Jewish mom — she is self-involved and often tramples on the sensitivities of her (often equally self-involved) children. But she’s also a wonderfully complex character with a nuanced inner life that is revealed as the show develops. The same goes for the two other Jewish mothers in the series: Ex-wife Shelly (the mesmerizing Judith Light, who perhaps leans a bit too heavily on Yiddishisms but who slowly comes across as a vulnerable individual, not a caricature ) and daughter Sarah (Amy Landecker, a divorced mom who brings a bit of New Age spirituality, and inappropriate sharing, to her local synagogue).Are these Jewish moms on “Transparent” grating and self-obsessed? Absolutely. But they also come off as real people, warts and all.Loreen Horvath, “Girls”First, a caveat: We don’t know for sure if Loreen Horvath (Becky Ann Baker), the mother of Hannah Horvath (Lena Dunham), the main character of “Girls,” is Jewish. But Dunham, who created the show, is Jewish, and Hannah describes herself at one point as” half Jewish.” (Which half? We don’t know.)But one thing is for sure — Loreen has raised one very complicated Jewish daughter. And Loreen, too, is complex: She’s a college professor whose marriage disintegrates when her husband comes out as gay. Through her occasional appearances on the series, we watch her grapple with her own shifting identity as a single empty-nester, and with her frustration at her daughter’s self-involvement and financial instability. And while Loreen is very much a proponent of tough love, she does come through in the end, when it really counts: to help Hannah with her own journey into parenthood. Bobbi Wexler, “Broad City”Blowing up the stereotype, here’s a Jewish mom who’s openly adored by her daughter (and adores her in return). The boundary-crossing 20-something Ilana Wexler (Ilana Glazer) delights in the company of her mom (played by comedienne extraordinaire Susie Essman, who brings Jewish TV mom experience as the epically profane Susie Greene on “Curb Your Enthusiasm”).Yes, Ilana frowns upon some of Bobbi’s eccentricities — her obsession with knock-off hand bags, for one. But Ilana and Bobbi seem to be two matzoh balls in a bowl: two women with a lot of chutzpah and charm who enjoy each other, and are a pleasure to watch. Frankie, “Grace and Frankie”Just like “Transparent,” this show centers around moms: Frankie (Lily Tomlin) is Jewish; Grace (Jane Fonda) is not. The premise has the two women learning that their business-partner husbands are lovers —  and so begins a wonderfully funny and surprisingly heart-warming journey of self-discovery and independence.Frankie is a hippy, trippy, spiritual Jewish mom. While the clueless, free-spirited parent may also be a TV trope — Dharma’s parents from “Dharma and Greg” come to mind — it’s one that’s less often explored with a Jewish matriarch. Frankie is pretty much the opposite of the stereotype of a Jewish mother in a comedy — she’s not a sidelined and two-dimensional caricature but a Jewish mother who is taking charge of her own story.