From Harlem to Tel Aviv

The Dance Theater of Harlem presents a mixed program at TAPAC. 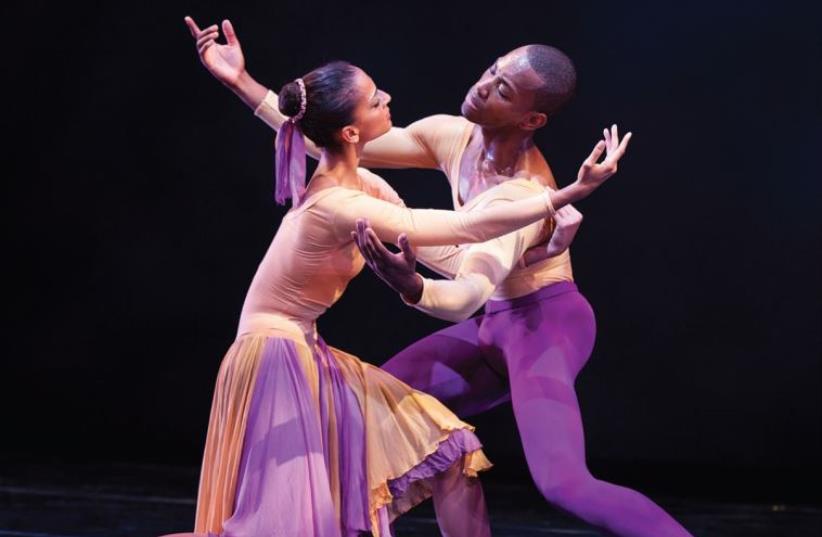 The Dance Theater of Harlem
(photo credit: MATTHEW MURPHY)
Advertisement
As the only company of its kind in the world, the Dance Theater of Harlem is constantly reshaping conceptions about ballet. Founded in 1969 by Arthur Mitchell, DTH was the first classical ballet company to prioritize black dancers.“We are a ballet company, but we are an African American company,” explains artistic director and former prima ballerina Victoria Johnson. “DTH has the opportunity to change people’s minds about ballet.”The last time that Johnson and DTH visited Israel, the company was just getting back on its feet, or pointe shoes, as it were. Having gone on a decadelong financially induced hiatus, DTH returned to the scene in 2013 a bit smaller but with just as much elegance as in its heyday. Whereas once more than 40 dancers flooded the stage, today’s DTH has 14 handpicked, excellent performers. The downsizing of the company has forced all involved to simplify things, focusing on the essence of the work rather than bells and whistles.“We are touring without boatloads of scenery and costumes. We look at the stage and what can be done with light, less with scenery. Less with costumes because we don’t have a big truck that goes around with us. We focus on the power of movement,” says Johnson.That same year, just months after Johnson held auditions for the newer, smaller company, DTH arrived in Israel with a best-of program that wowed audiences. The troupe performed as part of the 2013 dance season at the Tel Aviv Performing Arts Center. A second invitation arrived almost immediately following the company’s departure from Israel.“It’s very exciting for us to be coming back for a second time; it’s a wonderful opportunity. What we’re always trying to do when we do a program is to show the breadth of expression possible using the form that is ballet,” explains Johnson.In the two years since, DTH has come a long way.“It’s been a fantastic two years. The dancers have really gained strength. When we were in Israel last time, I was looking forward to building the company and making sure we were on the upward path artistically. Now I see that the dancers have something very beautiful, and it needs to be seen,” she says.On this visit, DTH will once again present a mixed program.The evening will include The Lark Ascending by Alvin Ailey; Dancing on the Front Porch of Heaven by Ulysses Dove; Vessels by Darrel Grand Moultrie; and Return by Robert Garland.Ailey’s The Lark Ascending is the oldest of the four pieces.Choreographed in 1972, this work was originally performed barefoot.“Alvin Ailey American Dance Theater is a modern company, and DTH is classical. When I went to Judith Jamison [former artistic director of AAADT] and said I wanted to bring The Lark Ascending to DTH, she said ‘You want to do it on pointe, don’t you?’ and we did,” Johnson recounts.Though the translation from modern to classical required some tweaking, the heart of the piece remains the same.“It epitomizes the human spirit,” beams Johnson.The transferring of the dance form from one generation to the next inspired Darrel Grand Moultrie’s Vessels, much as The Lark Ascending was passed on to DTH. The piece, which premiered in 2014, is a contemporary ballet in four parts.“It uses the vocabulary of ballet, but it is about expressing these young dancers as contemporary artists. Vessels speaks about the way our history and our art form is passed on,” Johnson explains.Dancing on the Front Porch of Heaven was created as a way to process and express personal loss.Dove originally choreographed this work in 1993 for the Royal Swedish Ballet.“It was created when Dove was experiencing the loss of his father. It was also the AIDS epidemic, and he was learning to come to terms with losing people around him,” says Johnson.The final work in the program, entitled Return, will certainly end things on a happy note. Danced to music by Aretha Franklin and James Brown, Robert Garland’s piece is a tried and true crowd pleaser.“It brings together what DTH does best. It is the quintessential African American experience,” says Johnson.Dance Theater of Harlem will perform at the Tel Aviv Performing Arts Center on June 10, 11, 12 and 13. For more information, visit www.israelopera.co.il.