Grapevine: Ambassador at the Seder 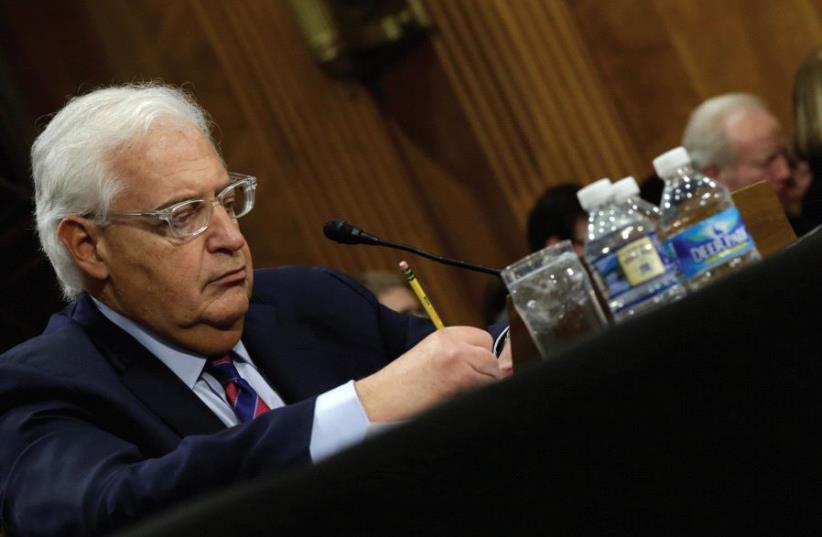 DAVID FRIEDMAN testifies before a Senate Foreign Relations Committee hearing on his nomination to be ambassador to Israel
(photo credit: REUTERS)
Advertisement
JERUSALEM FRIENDS who expected to see US Ambassador-designate David Friedman in Israel for Passover now that he’s been confirmed and has taken the pledge are disappointed. There were a lot of people in Talbiyeh who were hoping that he would grace their Seder table, but Friedman is having Seder with his family in the US.If, in fact, he decides to live in Jerusalem, as he said he would, he will have to live in the consulate building in Arnona, unless he agrees to have one of his apartments fitted with all the security devices that are common to the residences of US ambassadors around the world.FANS OF Rabbi Ari Berman, who traditionally gave the Shabbat Hagadol lecture in English at Yeshurun Synagogue as part of a cooperative endeavor between Yeshurun and the Great Synagogue, were under the impression that he would not be giving it this year due to his absence from country. Berman was last year appointed president of Yeshiva University, and it was presumed that he would be spending Passover in New York.Regardless of where he’s actually having Seder, Berman will be at Yeshurun as in years past to deliver one of his enlightening lectures, which are always made more interesting due to his knack for involving the audience all the way through.Congregants from many other synagogues in the vicinity flock to Yeshurun after their own services, and in addition to listening to a well-thought-out thesis also enjoy the opportunity for social networking.Berman will speak on “Tensions in Israel, Past and Present – The History of the Haggada and the Shifting Notion of Freedom.”ALSO ON Shabbat Hagadol, the Great Synagogue and Yeshurun cooperate with regard to the sermons of Ashkenazi Chief Rabbi David Lau, who will address the congregants at the Great Synagogue on Saturday morning, and those of Yeshurun on Saturday afternoon. On Friday night, Rabbi Shlomo Moshe Amar, the Sephardi chief rabbi of Jerusalem, will deliver the sermon at the Great Synagogue, and at 5:30 on Saturday afternoon, Sephardi Chief Rabbi Yitzhak Yosef will speak at the Great Synagogue.On Saturday night at 9:15, Rabbi Shlomo Riskin, chief rabbi of Efrat, will speak at the Great Synagogue on “Back of the Bus or Driving the Bus? What Pessah Teaches About the Role of Women.”Chief cantor Chaim Adler will be leading the prayers on both Friday night and Saturday, and may be in even better voice than usual, as he and his wife, Shoshana, have just celebrated the wedding of their grandson Meir Rotenberg to Mindy Bristovsky.The Great Synagogue still has some places available for its free community Seder. However, anyone wishing to participate must register in advance and receive an admission ticket. Anyone wishing to attend should call the office (9 a.m. to 1 p.m.) at (02) 623- 0628.AMONG GUESTS whom Prime Minister Benjamin Netanyahu and his wife, Sara, met in the Prime Minister’s Office this week were Genesis Prize officials who came with the 2016 laureate, violin virtuoso Itzhak Perlman, who donated his prize money to various nonprofit associations that work toward integrating people with disabilities into all levels of Jewish life. The Netanyahus were present at the Jerusalem Theater last year during the award ceremony.Representatives of the 17 organizations that were the winners in the Breaking Barriers initiative that was funded by the Genesis Prize money awarded to Perlman were also in attendance.Also present were emeritus president of the Supreme Court Meir Shamgar and Jewish Agency Chairman Natan Sharansky.Perlman is an icon for people with disabilities, proving that despite disabilities (he was stricken with polio as a child), one can rise to the peak of a profession. Aware of how difficult it is for many gifted people to overcome social stigmas, Perlman has been a lifetime advocate for community inclusiveness and rights of people with disabilities.