Recently, the Bible quiz for adults was revived, and now there’s yet another Bible quiz with the theme “The Land of Israel – Our Heritage." 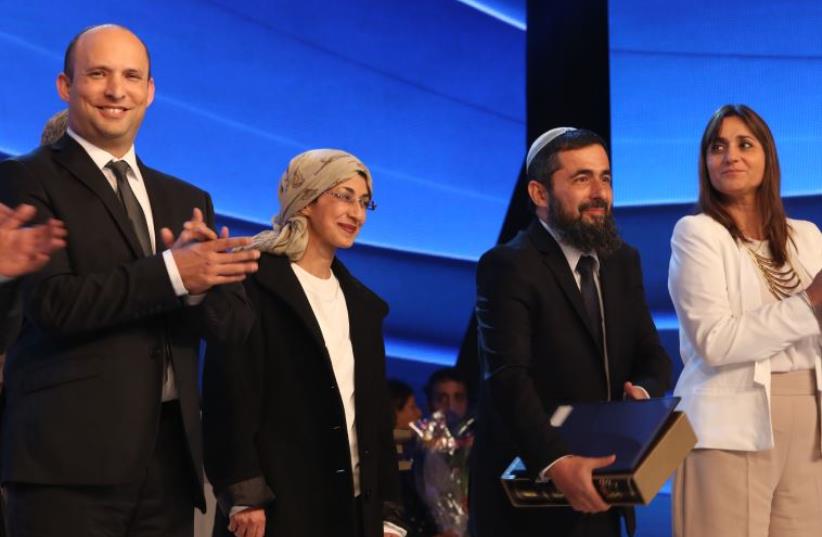 Winners of Bibile quiz for adults
(photo credit: SASSON TIRAM)
Advertisement
Akim in Netanya • By GREER FAY CASHMAN ■ DECEMBER IS equality and accessibility month for people with disabilities. In Netanya, the municipality and organizations dedicated to people with disabilities have been working in accordance with a theme that physical limitation is not a disability when there is accessibility.With this in mind, the Maccabi Netanya Soccer Club hosted Akim students on the second night of Hanukka and rounded off the evening with a performance by singer Kobi Reuven. This week, on the last night of Hanukka, there was a special candlelighting ceremony at the Sharon Mall for people with disabilities, and free doughnuts were distributed.What may be a more inspiring event will take place at the Shapira School on the morning of December 25, when Shai Reller, a young man who is a quadriplegic as a result of an injury he received when traveling in the Far East, and returned to Israel paralyzed from the neck down, will speak (in Hebrew) about how, despite his condition, he has found a purpose in life. The title of his talk is “To the Abyss and Back.”■ MANY PEOPLE would be surprised by the extent to which diplomats serving in Israel make it their business to familiarize themselves with people and places throughout the country. Though most serve here for two to five years, when they leave they have experienced more than most Israelis who have spent their whole lives in Israel. For instance, they are very well acquainted with Israel’s medical facilities, visiting hospitals all over the Jewish state.One of the most recent of such visits by a delegation from the US Embassy toured Ziv Medical Center in Safed. Headed by deputy chief of mission William Grant, the delegation included the embassy’s military attaché, the deputy political adviser and the regional security officer.Ziv Medical Center has come to international attention due to the number of Syrian patients treated at the hospital.Many visitors are still incredulous that a hospital in Israel could treat patients from a hostile neighboring country and that, in the case of child patients from Syria, permission is given for at least one parent or other senior relative to remain close by.The American delegation was briefed about the history and function of the hospital, with particular emphasis on the 547 Syrians who had been treated up to the time of the visit. The Syrian patients not only receive medical care but also are counseled by social workers and psychologists and are provided with all their basic needs.The delegation visited various departments of the hospital including the trauma center. At the conclusion of the visit, Grant praised the medical staff for the important work they do and the humanitarian care they impart.■ BIBLE QUIZZES are gaining in popularity. One of the features of Independence Day is the International Bible Quiz for youth, which is preceded by the National Bible Quiz to determine who will represent Israel at the international quiz.Recently, the Bible quiz for adults was revived, and now there’s yet another Bible quiz hosted by the Netanya Municipality, in memory of Rabbi Shlomo Makhlouf Orgad and Rabbi Fariga Matok, with the theme “The Land of Israel – Our Heritage.” The competition is being conducted among Netanya synagogues and the closing date for entries is December 31. The quiz is scheduled for April 3, 2016.Each synagogue is permitted to send two contestants over the age of 18 who have not been winners of the National Bible Quiz during the past 10 years.The material to be studied for the quiz is the simple commentary for the Book of Numbers (chapters 10-25), Judges, Jonah, Amos (chapters 1-5), 10 chapters from the Book of Psalms, and chapter 1 of the books of Isaiah, Jeremiah and Ezekiel.Applications should be sent to ofer.orenstein@netanya.muni.il or made by phone, (09) 860-8950 – the Sharon Academic Campus.