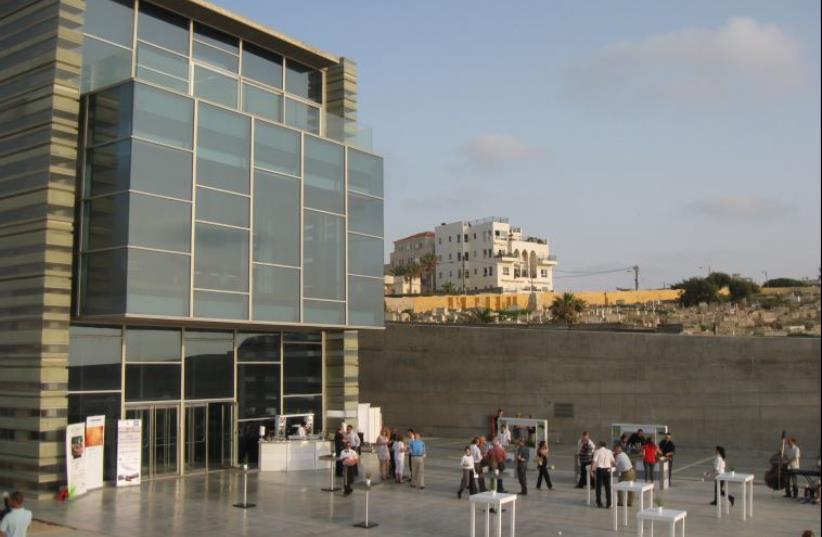 Peres Center for Peace
(photo credit: ORI~/WIKIMEDIA COMMONS)
Advertisement
■ THE JAFFA-headquartered Peres Center for Peace has long sponsored sports events in which Jewish and Arab youngsters participate together. Now the British Embassy, together with the Equalizer NGO, has followed suit and last week launched a soccer league in Jaffa for Arab and Jewish children. The launch took place at Jaffa’s Davis Lewis soccer field with the participation of Hapoel Tel Aviv’s Ramzi Safouri, who kicked off the tournament. Staff from the British Embassy participated in the friendly game against the youth.The Equalizer is a major educational and social NGO run in collaboration with the ministries of Education, Sport and Public Security, and has been supported by the British Embassy since January 2014. It provides year-round soccer-based activities for Jewish and Arab children across the country, instilling in them stronger sporting, social and educational values and promoting coexistence between Arabs and Jews. The Equalizer usually works with children in the 10- to 12-years-old age group, many of whom come from underprivileged backgrounds or areas in which there is a lack of affordable after-school activities. The Jaffa League will work with graduates of this program for a further year of social and educational activities.Commenting on the launch, British Ambassador David Quarrey said: “Following on from the success of the program in northern Israel, I am delighted to announce the launch of the first British Embassy and Equalizer Jaffa League, which will bring Jewish and Arab children together through soccer. I have seen the great work the Equalizer has already done in using sport to break down barriers and bring communities together, and I am pleased we can offer this opportunity to children in Jaffa.”Liran Gerassi, director and founder of the Equalizer, said, “We are very pleased to hold this inaugural event to launch this joint project in Jaffa with the British Embassy, after three years of cooperation in other areas. We are proud to partner with the embassy and thank Ambassador Quarrey for his willingness to support the program.”■ HOW MANY of us give much thought to the Venus and Mars aspects of comics? Do female cartoonists depict women differently than do male cartoonists? Can a male cartoonist reveal himself to be a misogynist through his art? How graphic should graphic details be? These and numerous other questions connected with comic impressions of women, and comics produced by women, will be raised at “Drawing the Line: Looking at Women’s Comics Art,” which will be held on Monday, May 23, in the Oren Conference Hall, Building 26 of the Marcus Family Campus at Ben-Gurion University of the Negev.Topics will include: Confessional Comics by Jewish Women; A First Look at Female Orthodox Comics in Israel; The Great Women Cartoonists; Resistant Gazes in Women’s Comics; and Comics from the Conflict Zones; culminating with the opening of the exhibition “Graphic Details: Confessional Comics by Jewish Women” and “Wonder Woman” at the Negev Museum of Art.Among the speakers at Drawing the Line will be Zohar Weiman-Kelman of BGU; Sarah Lightman, University of Glasgow; Pnina Rosenberg, Technion- Israel Institute of Technology; Noah Lee Cohen, Bar-Ilan University; Amalia Ziv, head of gender studies, BGU; Dalia Manor, director and chief curator, the Negev Museum; historian Trina Robbins; Dani Filc, BGU; Orly Lubin, Tel Aviv University; and Yael Levi Hazan, BGU. For a moment it looked as if this was one of those very rare occasions of a conference for women and by women, to the exclusion of males. But no, despite the spelling of Dani, Filc is a male.■ TWO RESIDENTS of Tel Aviv, Elinor Shaul and Liat Nathan, who are both third-year bachelor’s students in communications at the Interdisciplinary Center Herzliya, have come up with a project called Shoeview Tel Aviv, which strives to promote their city in an innovative and creative way. Shaul and Nathan recently opened an Instagram account under the name Shoeviewtlv, where they upload artistic shots of parts of Tel Aviv through individuals’ “shoe view.” All photos are welcome, ranging from sunsets to graffiti to night clubs and restaurants, while each photo incorporates the photographer’s view of the scenery – through their own shoes.“We’re looking to reach out to every individual of all ages and locations in the aspiration to give our city a new name and a new brand. More people need to know about the beauty of Israel, specifically Tel Aviv,” they say.They make no secret of the fact that this is a ploy to encourage aliya or to persuade people to visit and travel through Israel.Shoeview Tel Aviv allows and invites individuals to engage in their page with likes and follows, and importantly to direct messages and upload their own shoe views of Tel Aviv to share with the world.For more information, Shaul and Nathan can be contacted at [email protected] gmail.com. They also welcome ideas and are happy to learn from other people.