The exhibition marking the 100th anniversary of former prime minister Yitzhak Shamir has been on view at the Menachem Begin Heritage Center for quite some time now. 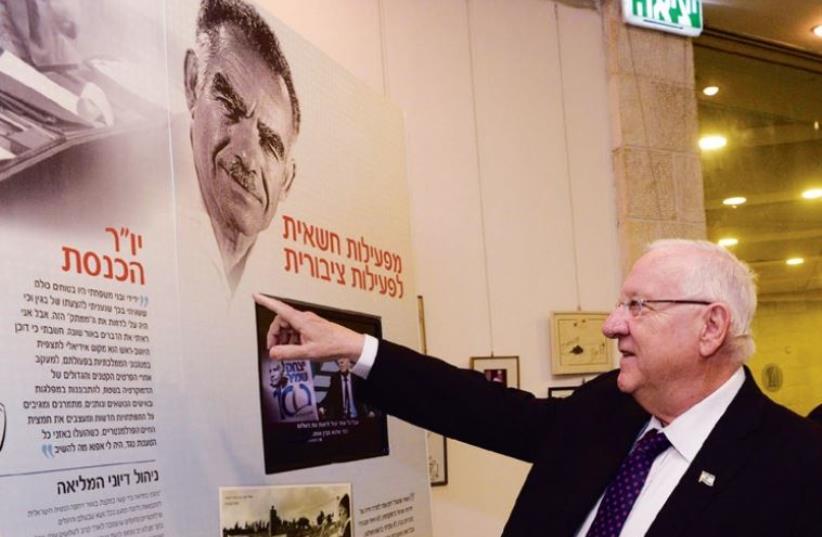 President Reuven Rivlin at the Shamir centenary exhibition
(photo credit: Mark Neiman/GPO)
Advertisement
WHEN HE joined the Israel Museum in 1997, James Snyder, its dapper, urbane and erudite director for close to two decades, had to overcome a great deal of hostility. Museum staff who had worked with his predecessor, Martin Weyl, resented this Harvard- educated American who, beyond “shalom” and one or two other words, knew no Hebrew and was not familiar with the country and the norms of its population.Over time, that resentment was transformed into admiration, as Snyder gradually revamped the museum and made it a world-class destination.During his first year, no one expected him to last the distance; the general feeling was that he would either resign or be dismissed. But Snyder surprised everyone. Through the friendships he formed with a number of ambassadors, he was able to create professional relationships with the most impressive museums in their countries and bring exhibitions on loan not just to Israel but to Jerusalem, thereby enhancing the international status of the Israel Museum. Every museum director has his or her style and specific talents. People thought that Weyl was a hard act to follow, until Snyder came on the scene.The announcement this week that he is returning to New York next January in his new capacity as international president for the museum’s worldwide activities left many people with a feeling of dismay. Museum attendance doubled under his leadership. His fund-raising efforts were legendary. His knowledge of art is incredibly wide-ranging. His gift for the spoken and the written word is enviable. Thankfully, he will still be associated with the museum and will visit several times a year. He and his wife, Tina, will now have the opportunity to be closer to their son and daughter, who live in New York, and museum chairman Isaac Molcho now has the headache of finding a suitable successor.The big question is whether the new boy (or girl) on the cultural block will be an Israeli or another import from abroad. When Snyder first took up his position, Israel was far less globally oriented than it is now, and was almost militantly reluctant to put non-Israelis or even new immigrants at the helm of anything. But that kind of thinking has changed, and it will be interesting to see who will be the next caretaker of the jewel in Jerusalem’s crown.EVEN THOUGH the exhibition marking the 100th anniversary of former prime minister Yitzhak Shamir has been on view at the Menachem Begin Heritage Center for quite some time now, and Shamir’s 100th birthday was last October, the celebration of the centenary of his birth took place last Sunday, with the participation of President Reuven Rivlin and Prime Minister Benjamin Netanyahu as well as Deputy Supreme Court President Justice Elyakim Rubinstein, former minister Uzi Landau, MK Bennie Begin, former defense and foreign minister Moshe Arens, whose 90th birthday was recently celebrated in the same venue, former justice minister Moshe Nissim, executive director of the Begin Center Herzl Makov and of course members of the Shamir family.Shamir was a prominent member of the Stern Group that fought the British, and in his memory and that of the group’s heroes, the audience sang its hymn “Hayalim Almonim” (Unknown Soldiers).Rivlin, the proudest of Jerusalemites, who invokes the name of the city in almost every conversation, recalled that at the Madrid Conference at the end of October 1991, Shamir had recited the passage from the Psalms “If I forget thee, O Jerusalem, may my right hand forget its cunning,” saying that for generations the Jewish people had repeated the pledge of the psalmist on every occasion and for millennia had encouraged each other’s bond with the Land of Israel with the greeting “Next year in Jerusalem.”At the opening of his address, Rivlin described Shamir’s escape from British captivity in Eritrea in January 1947. He had escaped together with four other prisoners who had been incarcerated under the harshest of conditions. Following the establishment of the state, Shamir had filled a number of important positions, but Rivlin, a former Knesset Speaker, preferred to focus on Shamir in that role, because Shamir as the first-ever Knesset Speaker from the Likud Party had made history.