“No piece of land in the State of Israel is without its sanctity and its significance.” 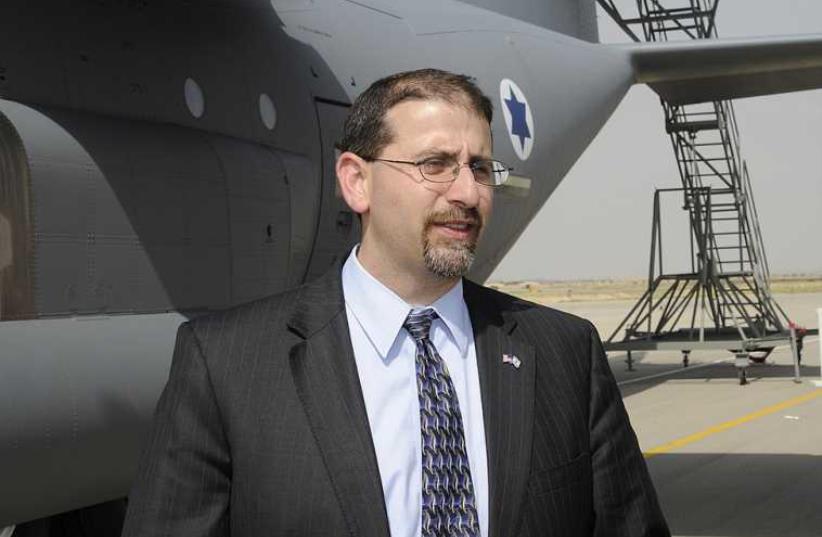 Dan Shapiro, the US ambassador to Israel, at Nevatim air force base
(photo credit: US STATE DEPARTMENT)
Advertisement
■ ON THE eve of the reception that they hosted at the American Residence in Herzliya Pituah to mark the 240th anniversary of American Independence, US ambassador Dan Shapiro and his wife, Julie Fisher, were in Jerusalem for the groundbreaking ceremony of the Taube Family Campus at Hebrew Union College.Shapiro said that he had come to salute HUC both in an official and a personal capacity. In an official capacity, he continued, he was saluting HUC on behalf of President Barack Obama, Vice President Joe Biden and Secretary of State John Kerry. In a personal capacity, Shapiro and his wife “are products of the Reform movement.” With this in mind, he came to salute HUC as “an oasis of knowledge and tolerance and beacon of tolerance, humanism and tikun olam.”Having spent a semester at HUC when he was a student, Shapiro said that “13 King David Street was literally my home.” He also praised the fact that new programs of tolerance at HUC draw inspiration from Shira Banki, murdered last year during the Gay Pride Parade in Jerusalem. Banki’s parents Uri and Mika Banki, who have since joined HUC, were present. Shapiro concluded by saluting the Taube family for building stronger bridges between Israel and the US.In reviewing the history of HUC, the conception of which he credited to noted archeologist and former HUC president Rabbi Nelson Glueck, Rabbi Aaron Panken, current president of HUC, commented that the campus was originally known as the Nelson Glueck School of Biblical Archaeology.“No piece of land in the State of Israel is without its sanctity and its significance,” he said, disclosing that HUC was built on the site of a former Jebusite village, was close to the City of David and was located in Jerusalem, “a place held sacred by generations of Jews wherever they were” and is today a vibrant rebuilt city. It was in Jerusalem that Israel’s first Reform synagogue was consecrated in 1963, he said. Relating to HUC Jewish Institute of Religion being a training center for Reform rabbis and cantors, Panken said that to date 93 Reform rabbis have been ordained there, and in November 2017 the number will reach 100. Coincidentally, the 100th anniversary of the Balfour Declaration and the 70th anniversary of the United Nations Resolution on the partition of Palestine will also be marked in November 2017.■ APROPOS SHIRA Banki, singer, musician and composer Korin Allal, who performed at the Gay Pride Parade in Tel Aviv earlier this year, has composed a song, which in Hebrew is called Shir LeShira (A Song for Shira). At a press conference that was held on Sunday by the leaders of Jerusalem’s LGBT community to mark the first anniversary of Banki’s murder, Allal who is herself a member of Israel’s LGBT community, sang the song in the presence of her parents. The song, with lyrics by Yonatan Geffen, was actually written before the murder, but was rededicated to Shira Banki by Allal, who told Shira’s parents that since the murder she sings it at every one of her performances.The Jerusalem Gay Pride Parade will take place on July 21.■ IT’S A given that Haggadot are illustrated, but it’s relatively rare for a siddur – a prayer book – to be illustrated. Nevarech Press has published Nehalel Bechol, a photographically illustrated prayer book with English translation.Jerusalem-based academic and translator Michael Haruni carefully went through scores of archives to find the photographs that best enhance the meaning of the liturgical texts. Most of the photographs were taken by Haruni himself. The hardcover book has a total of 695 pages. The prayers have been arranged in accordance with Ashkenazi tradition.■ THE ATTITUDE of the Chief Rabbinate in refusing to recognize conversions performed by Rabbi Haskel Lookstein, one of the most respected of American modern Orthodox rabbis, has sparked considerable anger in modern Orthodox circles in both the US and Israel, with a significant American expat membership. One such congregation is Hatzvi Yisrael in Talbiyeh, where Lookstein leads Sabbath services whenever he is in Israel.Reuven Asch, a former president of the congregation and currently a member of its executive board, last Saturday urged congregants to join the protest demonstration that was organized for this week outside offices of the Chief Rabbinate at the entrance to Jerusalem, not only on this issue, but also on the Chief Rabbinate’s refusal to recognize the kashrut certification of respected kashrut authorities abroad including Chabad, and the widely accepted Orthodox Union. Prior to Shavuot, the kashrut division of the Chief Rabbinate issued a warning that not all cheeses displayed in Israeli supermarkets and other food outlets are kosher, and listed several that have been approved by American and European kashrut authorities.“How can we live without Philadelphia cream cheese?” quipped Asch on Saturday, implying that by constantly exerting greater stringencies on all aspects Jewish life, the Chief Rabbinate will trigger the opposite of what it is trying to achieve.