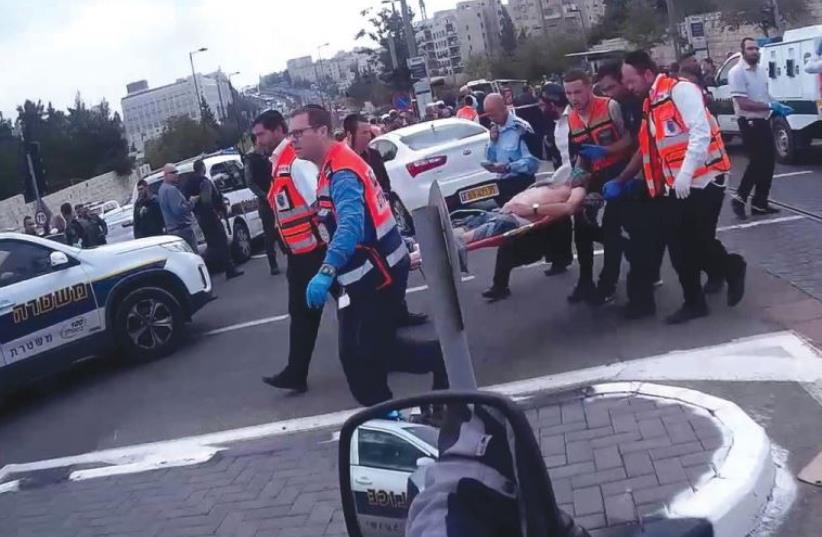 UNITED HATZALAH volunteers evacuate a wounded victim from a terrorist attack in Jerusalem.
(photo credit: Courtesy)
Advertisement
■ NOTHING IS more rewarding to a physician or a paramedic than to see the total recovery of a seriously ill patient or to be able to save the victim of an accident from what could have easily been a fatality. That was the experience of United Hatzalah volunteers Isaac Nugershall, Ze’ev Tepper and Yoni Bashri who, a year after saving the life of a child who had fallen out of a third-floor window on Bnei Brak’s Rabbi Akiva Street, were invited to a meal to celebrate the child’s recovery. The trio had instantly responded to an emergency call last year and performed life-saving CPR treatment before the child was taken to hospital in critical condition. There were strong doubts that the child would survive and, even if a miracle occurred, whether he would have full use of his faculties.After many medical procedures and surgery, he did recover, and the grateful parents, mindful of who had been the first to treat their precious son, invited the trio to the celebratory feast. After a year of rehabilitation, the youngster is now an active toddler, and the three were delighted to see his happy smile and to watch him jumping around.The child’s uncle is also a United Hatzalah volunteer, and through him, the paramedics were able to maintain contact with the child and his family and even visited him in hospital.A child falling out of a window or off a balcony from a great height is the nightmare of every parent. Unfortunately, it happened again last weekend when United Hatzalah volunteers, together with those of Magen David Adom, responded to a call to treat a three-year-old who had fallen from the third floor of a building to the first floor.She would surely have met her death but for the fact that her fall had been broken by clotheslines on a first floor balcony. Her parents had left her home alone.■ TEL AVIV Mayor Ron Huldai, while giving a lecture at a Tel Aviv high school, was asked by one of the students why the city didn’t allocate funds for the prevention of sewage seeping into the sea. Huldai replied that it may happen elsewhere in the country, but it doesn’t happen in Tel Aviv. The student said that she had seen it happen with her own eyes.Huldai, a former school principal, got angry and told her that she was impudent.But the student remained insistent. As a result, she was suspended from school by the headmaster, who told her that she had been sent home for a day because she had failed to practice the effective form of diplomatic discourse.■ AMONG THE many attractions during the intermediate days of Passover is the annual Yiddish Festival, which in seasons past has been held in Eilat or at the Dead Sea. This year, it is much more conveniently located for Yiddish lovers who use public transportation and will be held from April 23 to 25 at the Suzanne Dellal Center in Tel Aviv. This year it will be in the nature of an international festival with performers from Israel, France, Germany, Belgium and America.A highly popular Yiddish singer who appears on the international circuit and will be part of the Yiddish Festival in Tel Aviv is Myriam Fuks, who was born in Tel Aviv but spent a large part of her youth in Brussels. She grew up with Yiddish in her veins.Her mother was Fanja Glassman, a leading Yiddish actress, who had been a member of the famed Kaminsky theater ensemble in Warsaw. Fuks’s uncle was a Yiddish poet and journalist. Fuks returned to Israel in the mid-1970s, won a song contest and almost instantly became a household name. She lives in Brussels but will come to Tel Aviv for the festival.One of the greatest writers of Yiddish songs was Mordechai Gebirtig. The festival will include a special tribute to him, with most of the performers participating in a Gebirtig night in which his best-known songs will be sung.■ FORMER NATIONAL student chairman, and subsequently one of the leaders of the large protest movement for social justice, Zionist Union MK Itzik Shmuli is proving that it doesn’t always look different when you move to the other side of the table. Shmuli, who moved from the protest groups in the street to the legislature, has taken it upon himself to defend the rights of senior citizens, Holocaust survivors, the poor and people with special needs.He does this through regular appearances on a Reshet Bet consumer program designed to help listeners who call in with their problems. He talks to them in a tone of genuine concern and calls them back after the show to get the full story and do what he can to help. There are other caring MKs, but few who take such a personal interest in the public. Shmuli announces his phone number on air and asks listeners to contact him via his Facebook page, promising that he will respond personally and not leave it to a parliamentary assistant.■ HAIFA MAYOR Yona Yahav made headlines in the Hebrew media for refusing to allow youth at risk to move their open house from the criminally dangerous Hadar neighborhood to long-vacant premises on the Carmel. He was much better disposed towards Bnei Akiva, which inaugurated a new building in the Naveh Sha’anan neighborhood. Yahav took part in the ceremony of the affixing of the mezuza together with Technion rabbi Yossi Stamler and the deputy head of Bnei Akiva, Yair Shahal.