THE HIGH Holy Day period is when many synagogues make their money for the year by selling seats. In fact, there are some synagogues where anyone without a ticket signifying that their seat has been paid for cannot get in. 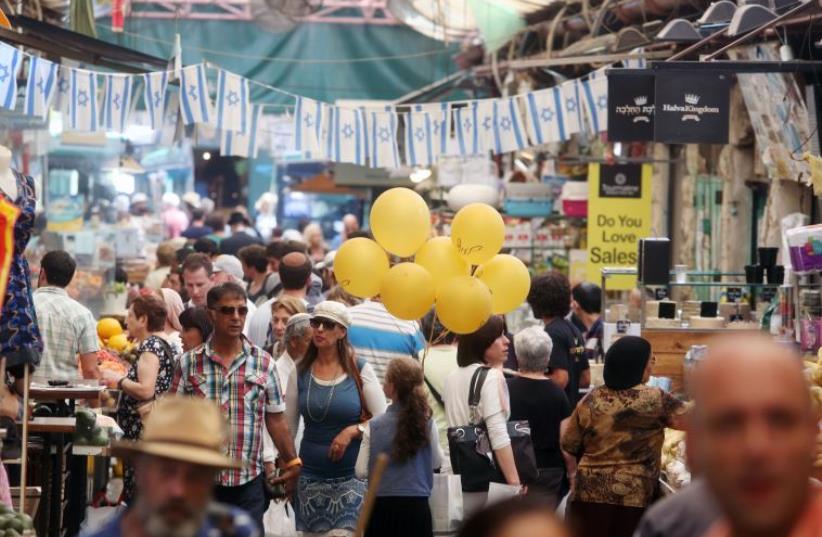 Mahane Yehuda shuk
(photo credit: MARC ISRAEL SELLEM/THE JERUSALEM POST)
Advertisement
THE HIGH Holy Day period is when many synagogues make their money for the year by selling seats. In fact, there are some synagogues where anyone without a ticket signifying that their seat has been paid for cannot get in.At the other end of the spectrum there are exceptions worth noting, such as Chabad of Rehavia, which advertises on street posters, on its website and on its Facebook page “We saved you a seat.” Rabbi Yisroel Goldberg, director of Chabad of Rehavia, has made it a general practice to not charge for seats, to ensure that anyone who wants to pray can feel perfectly comfortable walking into his congregation.Services are conducted on the lower level of the Great Synagogue, with Rosh Hashana services at 6:15 p.m., 8:30 a.m. and 5:15 p.m.There is also a junior service at 10 a.m. The shofar will be blown at 11:30 a.m. On Yom Kippur, Kol Nidre will begin at 6 p.m., and Yizkor the following day at 11:30 a.m.EARLY ON Friday mornings, there are not many people in downtown Jerusalem. The relative emptiness of the streets provides a good opportunity for window shopping or close inspection of construction sites, some of which are almost heart-breaking.The 160-year-old Etz Haim Yeshiva adjacent to Mahaneh Yehuda, which was sold in 2008 to private developers for $15 million, was in danger of being destroyed to make way for two high-rise residential towers. At one stage, it was thought that the historic buildings would be torn down, but fortunately they had been slated for preservation some 20 years earlier.The new modern towers are being built around them. The front of the complex already contains shops, but these could well remain empty as is the case with the Saidoff project on the other side of the market. The project involved the reconstruction of the Saidoff neighborhood, founded early in the 20th century by Yitzhak Saidoff, plus the addition of a row of shops. The project was completed some time ago, but with one or two exceptions the shops remain empty.Farther along Jaffa Road on Zion Square, French businessman and philanthropist Laurent Levy is reconstructing the interior of the iconic former central branch of Bank Leumi. When the work is completed, the building will serve as the Israeli flagship for his Optical Center, which has more than 430 branches in France and Belgium.The Jerusalem facility, for which Levy shelled out NIS 32 million, is one of several properties that he owns in the capital. He also has property in other parts of Israel. He plans to open 70 optical stores in Israel, utilizing 22 franchisees. The scheduled launch of the flagship store in Zion Square is October 20.THE JERUSALEM Crowne Plaza Hotel, which was originally the Jerusalem Hilton and the first hotel at the entrance to the city, was a pioneer in line with what was then Hilton policy, to build in an area that was non-residential and not part of the general tourist scene.That was more than 30 years ago. Since then, several other hotels have been built nearby. The Crowne Plaza is about to receive a face-lift and to be upgraded, much to the delight of its general manager, Avi Levy. Renovations to the tune of NIS 10 million will begin in the near future and should be completed by the end of 2016.ANOTHER BUILDING in which major changes are expected to be made is the landmark former Hamashbir department store on the corner of King George and Ben-Yehuda streets. Fifty percent of the stake in the property belonged to the Co-Op network of supermarkets in partnership with the Israel Land Development Company, which still retains the other half of the shares. Although the building is generally known as Hamashbir, the company is not trading under that name.The Hamashbir chain of department stores was bought out by businessman Rami Shavit, who subsequently built a new modern department store in Zion Square. Although the former Hamashbir was in use for some time, it sealed off its upper floors two or three years ago, and two months ago closed down altogether. The Co-Op supermarket operating in the basement can be accessed only through a side entrance and not through the main store, which is closed and padlocked.