The reality star brought on the wrath of her followers when she took a snap of herself wearing traditional Muslim garments. 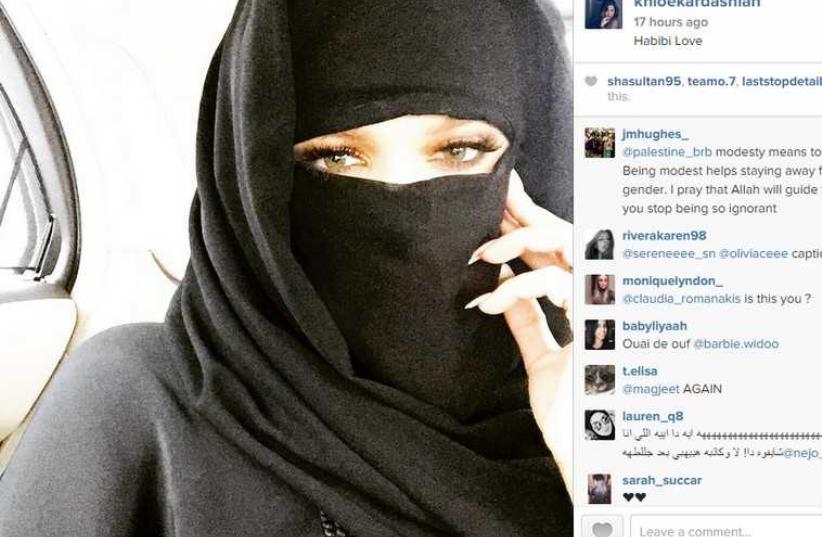 Khloe Kardashian dons hijab, niqab while in Dubai
(photo credit: SCREENSHOT OF KHLOE KARDASHIAN INSTAGRAM)
Advertisement
Instagram wielded its torches and pitchforks on Tuesday after American reality TV star Khloe Kardashian shared a photo of herself in a niqab – a traditional Muslim garment that covers the head and face, leaving just a slit for the eyes.The selfie, taken in Dubai, where most women adhere to a conservative dress code, shows the Keeping Up with the Kardashians starlet veiled in black, only her mascara-rimmed eyes peering out of the opaque headdress. Though foreigners are not required to wear the full-face veil in the United Arab Emirates, Kardashian nonetheless opted for the modest look, bringing on the wrath of the global villagers.


The snap, captioned "Habibi Love," an Arabic term of endearment, was deemed offensive by an angry mob of Instagram users, who took to the modern-day town square to go after Kardashian. The 30-year-old's account – which boasts nearly 23 million followers – was soon inundated with complaints, some excoriating her for dishonoring Islam and its long-held customs. Others accused the voluptuous beauty of reducing the niqab – often paired with an abaya, a loose-fitting, floor-length over garment – to a fashion accessory and appropriating a religious symbol to promote her brand. Still more highlighted a double standard, suggesting that when Kardashian sports the headscarf it is glamorized and rendered sexual; but when worn by Muslim women it reeks of oppression. Fans of Kardashian, by contrast, said she was just showing respect for Emirati society and the local culture. The youngest Kardashian sister is in the UAE for a hair and makeup event at the Dubai World Trade Center with Jennifer Atkin, a celebrity hairstylist, and Hollywood-based makeup artist Mary Phillips. Atkin shared a clip of the three wearing head-to-toe religious garb while visiting a shopping mall. The glam squad can be seen sauntering through a shoe store, bags clutched gracefully in their well-manicured hands, before spilling into an open area of the mall; their robe-like gowns trailing lazily behind them on the brown-and-white checkered marble floor.

How much time we spend at the mall? .... All day @khloekardashian @1maryphillips #WeLoveDubai #MyDubai
A video posted by Hairstylist Gypsy (@jenatkinhair) on May 26, 2015 at 12:03pm PDT


Most malls in Dubai advertise a courtesy policy, displaying signs at the entrances asking visitors to cover their shoulders and knees.The reality star is staying in an $8,000-a-night suite at Dubai's Atlantis, The Palm, an ocean-themed, five-star hotel that evokes the mythical lost city. Her three-story room – which shares a thick glass wall with a huge turquoise-blue aquarium – looks out into a glass-sided tank, providing a floor-to-ceiling view of the underwater lagoon, home to 65,000 sea creatures.

I love this hair style @jenatkinhair did on me!! At first I was iffy on it but I have to learn to remember how talented she is. If anyone can turn a hoe into a housewife It's Jen She just gets me. @1maryphillips you're a bad mamma Jamma I have a sting ray as a boyfriend now due to the gorgeous makeup you do.
A photo posted by Khloé (@khloekardashian) on May 27, 2015 at 8:40pm PDT


Kardashian has had her share of controversies: On Halloween she entitled a picture of herself clad in a cat costume with brother-in-law Scott Disick in a red-and-white Middle Eastern Kaffiyeh, "Sheik Pu--y."But it seems that for now, at least, her latest Instagram post will not be her undoing, or rather, her Frankenstein monster.