Peres amazed people with both his mental and physical stamina, his ability to continue dreaming for Israel and the good fortune of seeing many of those dreams come true. 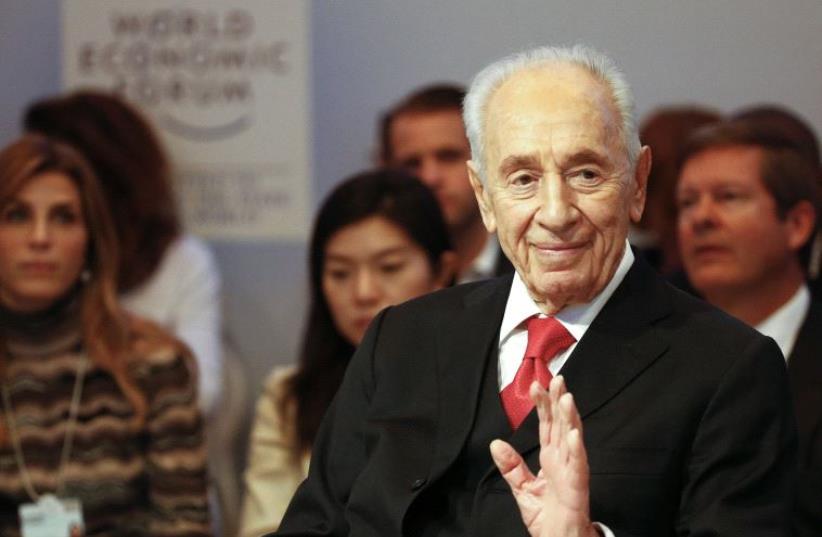 Shimon Peres
(photo credit: REUTERS)
Advertisement
During the years of his presidency, Shimon Peres celebrated his birthday with international mega-conferences in Jerusalem under the heading of “Tomorrow.” Peres always was a tomorrow man, looking forward to the future with greater curiosity and enthusiasm than he looked at the past.When people congratulated him with the traditional Jewish greeting of “till 120,” which was the age to which Moses lived, Peres would ask why they were selling him short.Peres amazed people with both his mental and physical stamina, his ability to continue dreaming for Israel and the good fortune of seeing many of those dreams come true, even if some of them were ridiculed at first.As he grew older, there were jokes about his alleged immortality, though he proved on several occasions that he was as mortal as anyone else – well, not exactly. He hated hospitals and recovered quickly from his ailments, from fainting spells to heart attacks, and he couldn’t wait to get back to work.The media were ready with obituaries from the time Peres turned 80, but time and again he proved that the voices of doom and gloom were premature.He may have been a retiree in age, but not in deed. Peres constantly hosted events at the Peres Center for Peace and Innovation in Jaffa, and frequently traveled abroad to participate in international conferences and new initiatives for peace in the Middle East.Peres was always known to be a workaholic.Work was the oxygen that kept him going, and the continuing exchange of views with past and present world leaders, scientists, spiritual leaders of different faiths, famous authors, entertainers, athletes and even children was the adrenaline that affected both his heart and his brain.Peres officially retired from public life in July 2014, when he completed his seven year tenure as president. Sometimes, one had the feeling that the 93-old-year Peres, who was the longest serving member of the Knesset, until he left in 2007 to take up the presidency, remained the shadow president of Israel. When a famous personality died, or some major tragedy took place in Israel or abroad, Peres was often the first to issue a statement of regret and condolence. He often did so before the current president and before the prime minister – a sign that he was still keeping his finger on the pulse of the nation, and of the world, for that matter.When presidents, prime ministers, foreign ministers and defense ministers from other countries visited Israel, in addition to the mandatory meetings with their Israeli counterparts, their itineraries almost always included a meeting with Peres, widely considered to be Israel’s elder statesman with the wisdom of the sages of old, but with an eye ever geared to the future.It’s true that he commanded much more respect abroad than at home, where blame for the failure of the implementation of the Oslo Accords, and the resultant waves of terrorism, was cast at his door. But outside of Israel, his unwavering belief in the possibility of peace and his efforts towards making peace a reality continue to be greatly admired.Peres was always recognized as a man of vision. His influence in the creation of Israel’s military and aeronautical industries is well known. What is not as well known is his encouragement of the use of the Internet. He was the first prime minister of Israel to have a website. He promoted nanotechnology when it was still in its infancy and hardly anyone knew what it meant, much less what could be achieved with it.While president, he actively promoted brain research, a topic that fascinated him.The very fact that Peres was interested in these subjects persuaded philanthropists to support them. The Edmond and Lily Safra Center for Brain Research at the Hebrew University more or less owes its existence to Peres’s long friendship with Lily Safra. Members of its staff have already revolutionized neuroscience research.Earlier this year, within the framework of the 20th anniversary celebrations of the Peres Center for Peace, the word “innovation” was appended to its title, in the belief that peace, diplomacy and scientific, technological and social progress must work in tandem to give hope to the world.In addition to hosting a variety of national and international conferences at the Peres Center, Israel’s former president and prime minister was invited to numerous conferences in Israel and abroad, and almost always received a standing ovation.At the beginning of September, he traveled to Italy to participate in the prestigious Ambrosetti Forum, which brings together past and present statesmen, political and religious leaders, economists and heads of multinational companies.Peres unfailingly attended the Ambrosetti Forum every year, just as he attended the World Economic Forum in Davos. His attendance at the Ambrosetti Forum this year might not have been reported by the media, because of the fact that on his return he entered hospital for the installation of a pacemaker.The arrangement had been made before he left Israel for Italy, but, not wishing to risk the possibility of remaining in hospital for observation and missing out on the Forum, Peres gave the pacemaker second priority. He was discharged from hospital on the day after the procedure. Unfortunately, he was not as fit as he thought he was, and he suffered a massive stroke on September 13.The Peres family continues with his work in the Peres Center for Peace, of which his son Chemi (Nehemiah) is chairman. His daughter, Dr. Tsvia Walden, is a member of the board, while his older son, Yoni, is also involved, ensuring that the vision of their father will endure into the future.