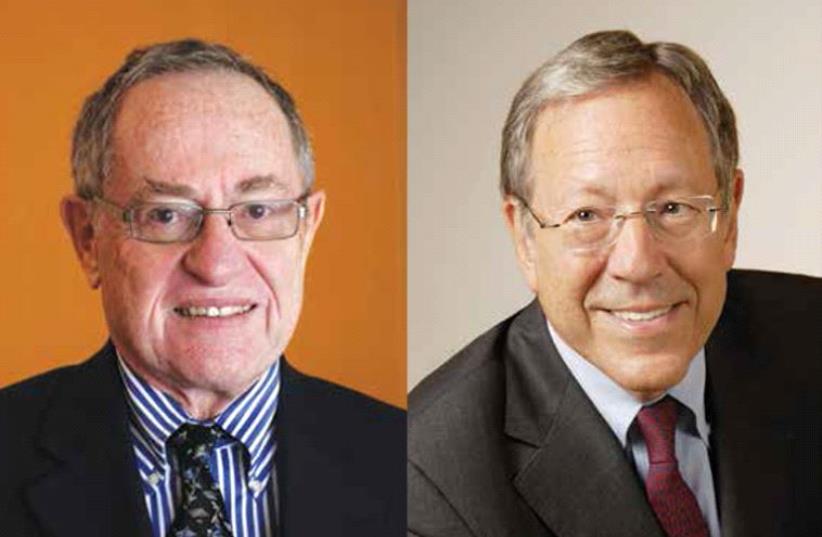 Alan M. Dershowitz and Irwin Cotler
(photo credit: Courtesy)
Advertisement
They are, perhaps, the two most eloquent international advocates for Israel and human rights – and they are good friends. One of them, Alan Dershowitz, even nominated the other, Irwin Cotler, for this year’s Nobel Peace Prize.As jurists, political liberals, brilliant public speakers and prolific writers who care about civil rights everywhere, they are respected not only in their home countries – the US and Canada – but throughout the world.Dershowitz dedicated his 2015 book, Abraham, “to Irwin Cotler – a modern-day Abraham – and to all courageous lawyers, Jewish and non-Jewish, who boldly confront injustice and who aggressively demand a single standard of justice.”“Abraham, the world’s first Jew, was also the world’s first lawyer, arguing with God on behalf of the doomed sinners of Sodom,” Dershowitz writes at the beginning of the book. “He was thus the first in a long line of Jewish lawyers.”Dershowitz and Cotler are probably the most famous contemporary Jewish jurists. They are often the first to jump to the defense of not only Israel, but of political prisoners and oppressed people around the world.Dershowitz, 78, spent most of his career at Harvard Law School where, in 1967, at the age of 28, he became the youngest full professor of law in its history. He held the Felix Frankfurter professorship at Harvard until his retirement in December 2013.In the interim, as a criminal appellate lawyer, he was involved in some high-profile cases, including Mike Tyson, Patty Hearst, Claus von Bülow and OJ Simpson.He was once described by Newsweek as America’s “most peripatetic civil liberties lawyer and one of its most distinguished defenders of individual rights.”A strong supporter of US President Barack Obama, Dershowitz broke ranks to speak out forcefully against last year’s Iran deal. In his new book on the American presidential election, Electile Dysfunction: A Guide for the Unaroused Voter, he argues that the 2016 race “is the strangest presidential election in my memory. Despite the polls, the outcome is utterly unpredictable.”Cotler, 76, a former justice minister and attorney general of Canada, served as a member of Parliament of Canada from 1999 to 2015. An emeritus professor of law at McGill University, and pro bono counsel to political prisoners, including imprisoned Saudi blogger Raif Badawi and Nobel Peace Laureate Liu Xiaobo He recently founded the Raoul Wallenberg Centre for Human Rights “in remembrance of the Swedish hero of humanity who demonstrated how one person with compassion to care and the courage to act can confront evil, prevail, and transform history.”