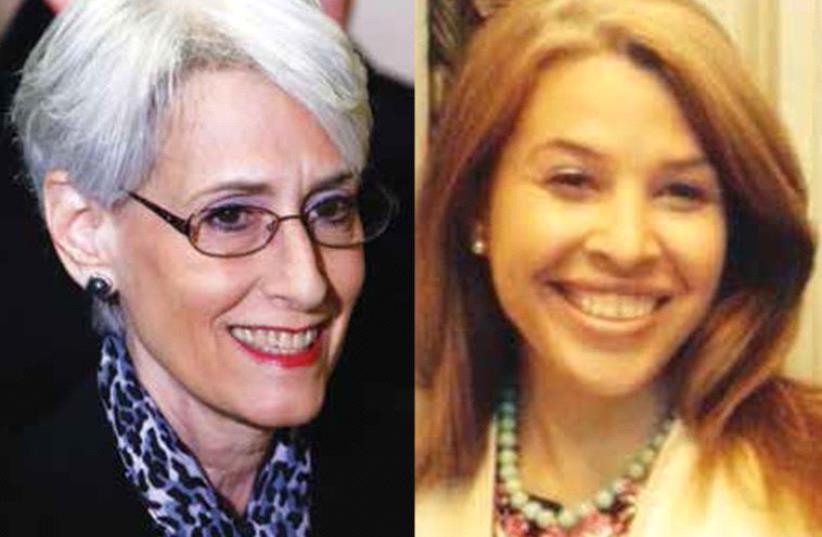 Wendy Sherman and Sarah Bard
(photo credit: CHERYL HIMMELSTEIN,REUTERS)
Advertisement
The daughter of a conservative rabbi, an alumna of Solomon Schechter and a former kibbutz resident, Sarah Bard grew up with deep Jewish roots, with a Jewish understanding of equality and fairness. And she’s grown to believe that her Jewish values compel her to support Hillary Rodham Clinton for president.Bard – a veteran of Clinton’s first presidential campaign in 2008, US President Barack Obama’s 2012 reelection campaign, and the Democratic National Committee – now serves as Hillary for America’s Jewish outreach director. Her work, she told The Jerusalem Post in March, has long been informed by her sense of identity.“My mom died when we were young, and our family was really struggling – and I don’t think we would’ve gotten through without that community,” Bard said in a phone call from Florida. “I was always very much drawn to the Democratic Party.”She joins the team of some policy heavyweights, including Wendy Sherman, one of Hillary Clinton’s top foreign policy advisers and an appointee on the Democratic Platform Committee throughout the spring.Sherman brought out her skills as a diplomat – she was Obama’s top negotiator with Iran during talks over its nuclear program – to ensure that language on Israel in the DNC platform remained consistent with past years. On the other side of the table, appointees of Bernie Sanders were fighting for language on Israel’s occupation and settlement activity in the West Bank.“They just came to me and said, ‘we’re going to win this and you’re going to lose,’ James Zogby, founder and president of the Arab American Institute and a Sanders appointee to the committee, said at the time. “There’s a fear to even talk about it in public.”Sherman is expected to receive a top appointment in a Clinton administration, should her horse win the race in November.