Every time the Likud has been defeated since 1974, the party that defeated it has been led by a former general, except the 2006 election. 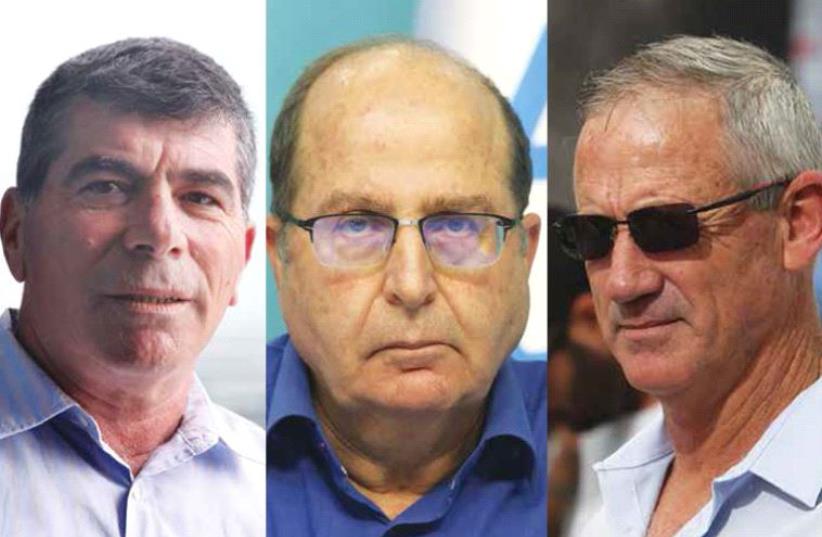 Benny Gantz, Gabi Ashkenazi and Moshe Ya’alon
(photo credit: MARC ISRAEL SELLEM)
Advertisement
The toughest candidate facing off against Prime Minister Benjamin Netanyahu in the next election could very well be a man who is not currently in politics.Every time the Likud has been defeated since 1974, the party that defeated it has been led by a former general, except in the 2006 election, when Kadima was led by Ehud Olmert, who was overshadowed by his hospitalized predecessor, Ariel Sharon.The potential list of former generals who could lead a party in the next election includes three former IDF chiefs of staff: Moshe Ya’alon, Benny Gantz and Gabi Ashkenazi. The future of all three is up in the air, and how they play their political cards will determine their success.Ya’alon quit the cabinet and bashed Netanyahu and Likud in May, when the prime minister decided to give his job to Yisrael Beytenu leader Avigdor Liberman when his party joined the coalition. He declined an offer to become foreign minister.Polls immediately predicted that a Ya’alon-led party could beat Netanyahu’s Likud, especially if the candidate ran together with former interior minister Gideon Sa’ar, and perhaps another former general.The latest surveys have found that Ya’alon’s popularity has fizzled while out of the limelight. He has formed a new nongovernmental organization for his political activity, which could later become a party, but with no real platform other than Facebook to reach out to the public, Ya’alon could end up regretting burning bridges on his way out of Likud.Ashkenazi emerged unscathed from the so-called Harpaz affair, and his success as head of the IDF is unquestioned; despite his name, he is considered Sephardi, which could give him a political boost.Nonetheless, getting cleared in criminal investigations does not automatically persuade a skeptical public after being all but convicted in the press, and Ashkenazi’s associates say he hates politics, meaning there is no guarantee that he will enter the fray.  Gantz is the only one of the three who has no strikes against him. No investigations, no enemies, and no baggage. That could make Gantz especially sought after when the next election approaches.There is only one former IDF chief of staff, whose credentials includetenure as a former prime minister and defense minister, who appears to be unwanted. Despite the resume, recent interviews attacking Netanyahu, and mysterious billboards urging him to return to politics, the lack of public interest in Ehud Barak making a political comeback makes his return a long shot.