Just Torah: The Pharaoh of the Western Wall

I was not there on Rosh Hodesh Av when Rachel Cohen Yeshurun was arrested for smuggling a Torah into the Kotel. I was there, however, the month before, on Rosh Hodesh Tamuz. 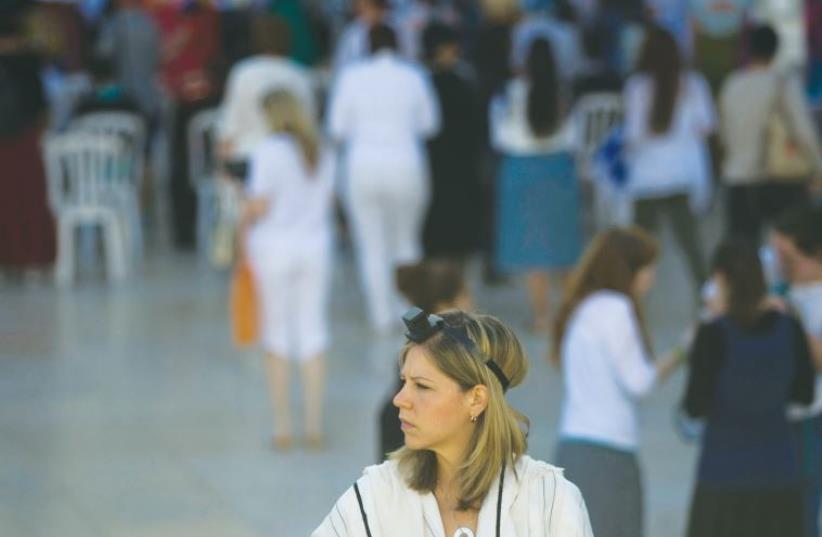 A member of the Women of the Wall group wears a prayer shawl and tefillin, during a monthly prayer session at the Western Wall on May 1, 2014.
(photo credit: RONEN ZVULUN / REUTERS)
Advertisement
‘The suspect was arrested... [at which time we] confiscated a Torah scroll...which was involved in the conducting of the crime” – Arrest warrant, translated from the original.What is the original language from which this was translated? And when was it written? It must be O-L-D old. From the Babylonian period in the seventh century BCE? No? Ah, from Assyrian period in the eighth century BCE! Not that either? Um, okay. Oh I know! From the Greek period in the second century BCE! No? Not so long ago? Much more recent, you say? Oh, I know – from the Soviet era, circa 1970! No? Even more recent than that? Hmmmm. Beats me. I mean, Jews can freely read the Torah in Ukraine. And Russia. And Iran, for God’s sake! Wait. WHAT? This was translated from Hebrew – in 2015?! You mean – Israel? Surely you jest.Not a joke.I was not there on Rosh Hodesh Av (do I need to comment on the irony of the timing?) when Rachel Cohen Yeshurun was arrested for smuggling a Torah into the Kotel. I was there, however, the month before, on Rosh Hodesh Tamuz. With a Torah scroll in my arms. At Dung Gate. But that’s as far as the Torah and I got. Because a police officer stopped me. I did, however, get to share a moment with him.I will share the conversation. (Also translated from Hebrew, in 2015.) “You made aliya from Ethiopia?” I asked.“Yes.”“Is this why you came to Israel? To stop Jews from reading Torah?” “I came to be a police officer.”“Is this why you became a police officer, to stop Jews from reading Torah?” Obviously I don’t know what he was thinking and feeling, but we were smiling. And his expression was one of “I know this is incredibly stupid and I wish I was not in this position.”Mine, I hope, conveyed my understanding of his defined role.In fact, I said in a stage whisper: “I know this is not up to you.”“These are the rules of rav hakotel [Shmuel Rabinowitz, rabbi of the Western Wall and holy sites],” he said. He did not move but a shrug was in the air.“Rabbi?” I asked with exaggerated incredulity. “But a rabbi brings Jews closer to Torah – she doesn’t deny the Torah to Jews! You must mean par’oh hakotel – the pharaoh of the Western Wall!” He did not laugh. I mean, a smile slipped – and I like to think that in a different context it just might have been a laugh.This week we begin Deuteronomy with Moses’s recounting of 40 years of wandering, a big review to prepare us to enter our land. But as we know, Moses will not join the nation. God takes that merit away from Moses, explaining: “Because you did not believe in Me to sanctify (KaDeSH) Me in the eyes of the Children of Israel, therefore you shall not bring this assembly into the land which I have given them” (Numbers 20:12).This is attributed to Moses hitting the rock to draw water from it, instead of following God’s command to just speak to it.But it also recalls the language of sanctity (KaDeSH) of Sinai. God instructed Moses to prepare the people for the giving of the Torah.“And the Lord said unto Moses: ‘Go unto the people, and sanctify them today and tomorrow, and let them wash their garments...“And Moses went down from the mount unto the people, and sanctified the people; and they washed their garments… And he said unto the people: ‘Be ready against the third day.’” But then Moses added another sentence: “Come not near a woman” (Exodus 19:15).Women could not avoid themselves – so Moses spoke only to the men, whereas God had instructed him to speak to all the Israelites.Perhaps that is the fateful moment in which Moses diminished God’s sanctity in the eyes of the people.If Moses our Teacher is punished for pushing half the Jewish people away from directly receiving the Torah, Rabinowitz should certainly think twice before attempting the same. The writer, a rabbi, is the founder of JustAdopt – JustAdopt.net –and can be found on Twitter @rabbasusan and @justadopt. Her upcoming book, Casting Lots: Creating a Family in a Beautiful, Broken World (Da Capo Press) will be published in May 2016.